Get ready for a 4.3 per cent tax hike, Prince George 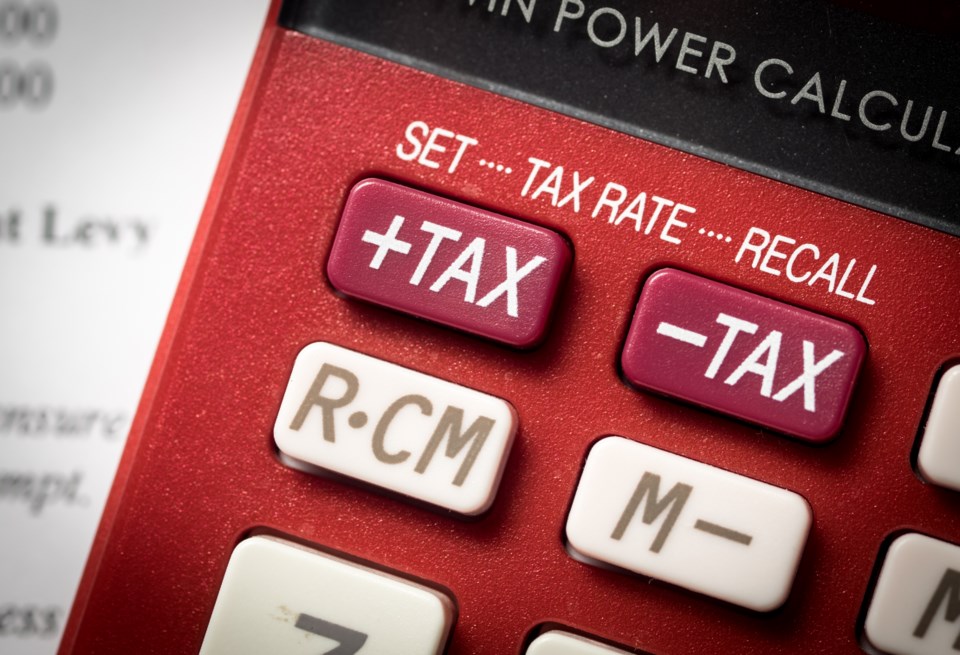 Well, Prince George taxpayers will have to prepare for a hike of 4.3 per cent in 2019.

Mayor and council discussed the tax hike as a part of the 2019 Budget Council meeting held on Feb.11. 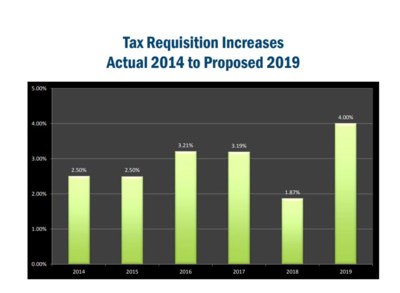 (via City of Prince George)
The total tax levy is made up of four individual levies that include: general (operating), snow control (operating and capital), Road rehabilitation (capital), and a general infrastructure reinvestment fund (capital).

The proposed four per cent increase included a $1.5 million increase to snow removal budget, which will now rise to $8.5 million.

“In 2018, of course, was a chaotic year when it comes to the amount of snow we got in a short burst of time and so our expenses were quite high in 2018,” said the city’s director of finance, Kris Dalio.

Dalio also explained that the city has added the winter sand pickup and snow capital expenses, which allows for the full cost of snow control.

“Because snow is a volatile expense and vary from year to year it’s important to look at averages to history and try and get that levy to not be the high end or the low end but the average amount as well as build up a bit of a reserve in case we have years like 2018,” said Dalio

He said the levy should be high enough to create a reserve that is equal to 25% of the annual net snow control expenses, as well as the capital needs of the snow control function.

Based on average costs over the last five years and with a goal of replenishing the reserve in the next three years, the administration recommended the $8,500,000 number for 2019. 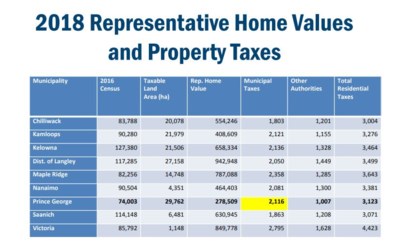 (via City of Prince George)
“Amongst our comparers, our municipal taxes are actually quite reasonable - we are middle of the road,” said Dalio, referencing a 2018 home values and property tax chart comparing B.C. municipalities.

“We occupy a large geographical space compared to some of our comparer municipalities and so we have a lot more infrastructure to maintain per population. Something to keep in mind is that we are middle of the road, but we are also maintaining a lot more space.”

Council also had requests for additional funds and approved three enhancement projects including increased costs to Masich Place Stadium, an All Wheels Park within Blackburn and a Community Culture Plan.

Once Council has determined the total amount of municipal property taxes to be raised in the city’s operating budget, council must then approve the annual tax rate bylaw which details what share of that total taxation revenue will be collected from each of the city’s nine property tax classes.

The financial plan bylaw and tax rate bylaw will have to be passed before May 15.

UNBC-led research suggests Mount Polley mine disaster continues to contaminate Quesnel Lake
Aug 13, 2020 12:15 PM
Comments
We welcome your feedback and encourage you to share your thoughts. We ask that you be respectful of others and their points of view, refrain from personal attacks and stay on topic. To learn about our commenting policies and how we moderate, please read our Community Guidelines.