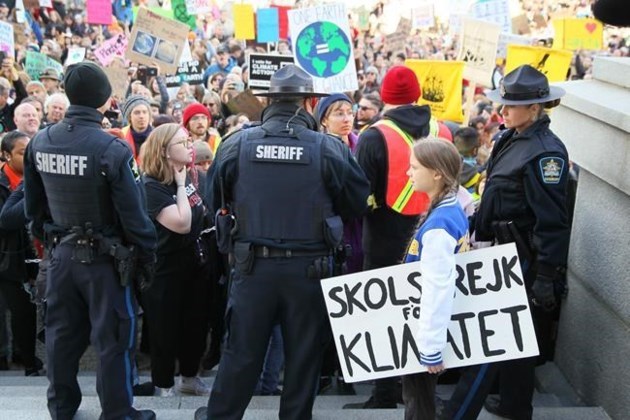 Greta Thunberg at a climate change rally in Edmonton, Alta. (via The Canadian Press)

Swedish climate activist Greta Thunberg stayed away from any direct criticism of Alberta's oilsands as she took her message to the provincial capital on Friday (Oct. 18).

The 16-year-old told thousands of people in front of the legislature in Edmonton that the future of the planet is at stake.

"We cannot allow this crisis to continue to be a partisan, political question. The climate and ecological crisis is far beyond party politics and the main enemy right now should not be any political opponents, because our main enemy is physics," she said. "We teenagers are not scientists, nor are we politicians, but it seems many of us, apart from most others, understand the science because we have done our homework."

A group of oil and gas industry supporters, some who travelled to Edmonton in a truck convoy from Red Deer, held a counter-rally at the legislature, but were vastly outnumbered by climate activists.

Alberta Premier Jason Kenney had said his government didn't plan on meeting with Thunberg, and on Friday he visited a power plant west of the city that is switching from coal to cleaner natural gas.

"This is the kind of real, practical, technological solution to reducing greenhouse gas emissions," Kenney said.

Thunberg has been making international headlines for criticizing world leaders who she accuses of letting down youth by doing too little to tackle climate change.

A crowd of people stretching two city blocks first marched with the teen through Edmonton's downtown to the legislature. Edmonton police estimated the size of the crowd at between 3,500 and 4,000, but organizers said they believed it was more like 10,000.

At one point three young men tried to rush Thunberg, but organizers kept them back, said Joe Vipond with the Calgary Climate Hub. Several climate activists locked their arms around the teen during part of the walk.

"We just want to make sure she's safe," said Vipond.

The physician said he came to Edmonton with two busloads of Calgarians to support Greta.

"She's the voice of this generation," he said. "She's put herself out there. Can you imagine as a 16-year old taking all this on? She needs all the support she can get."

Others at the rally said they like Thunberg's message.

"We're so big on oil, gas and pipelines and stuff like that. It's going to be hard for her to convince a lot of people here like she convinced me," said 11-year-old Ingrid Fredrick before the march started. She added that she's been inspired by Thunberg since the teen started demonstrating outside the Swedish parliament last year.

Protester Saima Jamal came with her 12-year-old son from Calgary to show that people in that city also care about Thunberg's cause.

"We might be an oil and gas city. We might be suffering a lot, but we still care about this climate," Jamal said. "We want to show that we're compassionate people. We're not here to drive her out, we're here to welcome her."

Zachary Neufeld, 18, works in Fort McMurray and went to the rally with a few friends carrying signs that read, "I Love Canadian Energy." They said they believe in climate change, but there's a way to make fewer emissions while keeping jobs.

"It's really important that we keep those jobs, especially Alberta, because that's a lot of our economy," said Neufeld.

Before the rally, Thunberg was confronted in the hallway of her hotel by right-wing media outlet Rebel News.

In a 10-minute video posted to YouTube late Thursday, the Rebel employee asked Thunberg's associates whether it's appropriate to exploit a child with a mental illness.

"I don't have a mental illness," Thunberg laughed in the video.

The questioner asked whether she'll disclose who funded her trip to Canada in the middle of a federal election campaign.

"I have not spoken about politics," Thunberg said.

"Climate change is politics, is it not?" the Rebel employee asked.

"No. It's science." Thunberg responded.