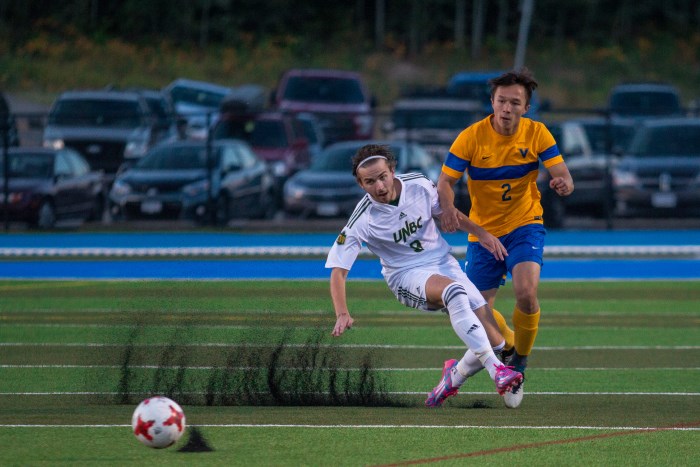 The UNBC men's soccer squad is returning to Prince George for their home-opening weekend after earning a 1-1 split against the UBC-Okanagan Heat on the road this past weekend (Aug. 23 and 24).

The Timberwolves opened the 2019-20 season with a 2-1 loss on Friday before earning a 2-1 win of their own the following night.

UNBC was down 1-0 in the second half before earning their first win of the year in style.

The Heat's Sam McDonald would score his second of the back-to-back series in the 25th minute Saturday evening to put the home side up 1-0 off of a corner kick.

The Timberwolves had an extremely tough time cracking the UBC-Okanagan defense in the opening half with UNBC keeper Rob Goodey having to stand on his head to keep the home side up by only one.

UNBC attackers Michael Henman and Hussein Behery were injected into the second-half lineup.

More substitutions were made by the visitors after 25 lackluster minutes.

Prince George product Alex Nielson came into the game with Kelowna also adding Gregor Smith on the pitch which ended up seeing Nielson scoring on a close-range opportunity with his first university goal to tie the game at one's.

“It was a similar first half to last night, but this felt different,” UNBC’s Michael Henman said in a release postgame. "We weren’t going to be happy with a tie, nevermind a loss, so we knew what we had to do going out there.”

Henman himself added an assist on the goal but would add an even bigger point later.

Fourteen minutes after the Heat were unable to capitalize on an incredible scoring chance, UNBC defender Luke Brbot kept the ball out of the net on the line before blasting a long ball downfield that went over Heat keeper Nicholas Reitsma to a waiting Henman who made the best of his chance to put the T-Wolves up 2-1.

“Hussein sent a great ball in, and it went way up in the air, so I just wanted to make sure I would direct it in,” Henman added after the game. “I was screaming it felt so good. This group of guys is so special, it felt amazing in that moment to do something for them.”

UNBC now comes back to Prince George with a 1-1-0 record taking on the UFV Cascades this coming weekend at Masich Place Stadium.

“We are ready to go. We know UFV is good, and we won’t take them lightly,” Henman said. We know we are going to have a lot of support from our friends and family, and we are going to do our job.”

UNBC men’s soccer signs 10th Victoria-born product for 2019-20 season
Aug 8, 2019 2:35 PM
Comments
We welcome your feedback and encourage you to share your thoughts on this story. We ask that you be respectful of others and their points of view, refrain from personal attacks and stay on topic. To learn about our commenting policies and how we moderate, please read our Community Guidelines.