A breakdown of the recent gun violence in the northern capital
Sep 24, 2020 1:15 PM By: Hanna Petersen 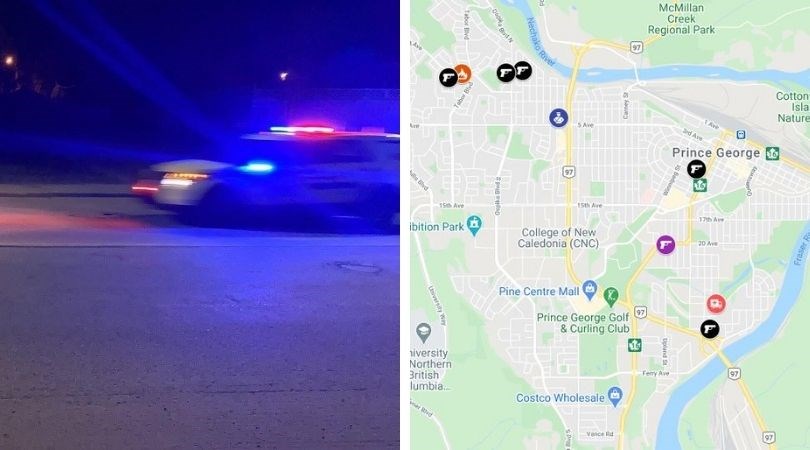 In just under 10 days, Prince George has experienced half-a-dozen shootings and a house fire all related to gang violence.

In all cases, Mounties explain those that were being targeted are not co-operating with the investigations.

However, RCMP says one incident, the Upland Street shooting involving a verbal altercation between a group of three people and two men on bikes, is not linked to the recent gang violence.

Here is a map of gun violence occurring in Prince George throughout September 2020:

Police add resources are being allocated in hopes of stopping the ongoing dispute in order to ensure the community’s safety.

So far, two people have been arrested and six others are waiting for charge assessment by the B.C. Prosecution Service.

RCMP say more police action is likely given the nature of the incidents.

Here is a timeline of gun violence and gang-related events in a 10-day period:

Anyone with more information about violence or illegal firearms in the city is asked to call Prince George RCMP at 250-561-3300.

You can also anonymously contact Crime Stoppers at 1-800-222-8477 or go online to www.pgcrimestoppers.bc.ca.

Several family pets rescued from early-morning Prince George fire
Sep 22, 2020 8:35 AM
Comments
We welcome your feedback and encourage you to share your thoughts. We ask that you be respectful of others and their points of view, refrain from personal attacks and stay on topic. To learn about our commenting policies and how we moderate, please read our Community Guidelines.