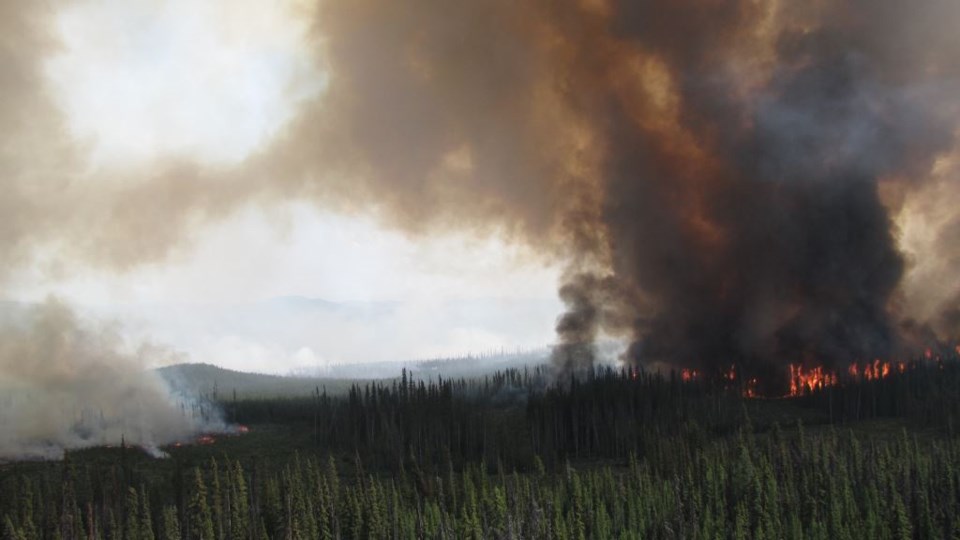 Plumes of smoke rise from the aggressive Shovel Lake wildfire outside of Fraser Lake, B.C. (via B.C. Wildfire Service)

While the past two wildfire seasons may not have impacted Prince George directly, the unprecedented events displaced thousands of people from their homes and some losing them entirely.

To ensure this doesn’t happen again, the B.C. Wildfire Service and FireSmart B.C. are encouraging homeowners in rural and urban communities in the northern region to take extra pre-caution this year by making simple steps to prep your property.

Forrest Tower, information officer in the Prince George Fire Centre, says residents, whether they were impacted by a forest fire or not, have been asking what they can do to help.

He believes the biggest thing residents can do is little tidy tasks around a property.

“We’re moving forward to what we’re calling a shared responsibility between the B.C. Wildfire Service, the main agency, and then the general public,” Tower explains to PrinceGeorgeMatters. “Most of the tips are landscaping-oriented, but these are not really massive costs when it comes to protecting a home. They just take time to do and it ensures the resiliency of your house during a wildfire situation.”

Tower’s tips for a safe fire-hazard free home include (via FireSmart B.C.):

While cleaning up your property, take note of where vegetative debris accumulates. These are likely the same areas that the wind will blow embers to. Homes are all different, but each can be FireSmarted #FireSmartBC https://t.co/VpWBoOCGKH pic.twitter.com/soC52Ln6YE

He adds those living on property in, what the B.C. Wildfire Service calls, the wildland urban interface surrounded by trees or backed by a greenbelt in a rural area, should be following these simple tips.

However, this doesn’t mean people living within Prince George city limits should take a seat back as Tower uses the Fort McMurray wildfire as an example.

“If we looked at what happened, there were areas with no trees around them. They were kind of in the middle of neighbourhoods and in the middle of communities and still burned down. So we’re learning, through some of the research being done, that the main problem you have is embers, not the flames. Embers can be right up against your house and ignite the structure when they catch fire. They land from large fires in previous years onto your roof, in your gutters, and under your deck.”

The B.C. Wildfire Service has repeatedly said it's hard to predict if and when the next wildfire season will start, having to rely on Environment Canada for large scale predictions.

Based on the up-and-down weather the city and region has experienced in 2019 thus far, Tower says we could be in for more above-average temperatures in the summer.

“We had a fairly normal snowpack, and with no increase, that would give us more precipitation and moisture in the ground,” he explained. “So it does look like there’s a potential to have another busy season, but the main determining factor when we get those predictions is how much rain we get in June, and precipitation is very hard to forecast. We need to just wait until June rolls around, how much rain we get there, and that kind of dictates the bulk of our fire season in July and August.”

In the last two summers, more than 2.56 million hectares of land have burned in all of B.C., with 2018 being the worst season on record; nearly 2,100 fires burning 1.35 million hectares.

It's time to get FireSmart about Wildfires in BC. Your community might not be ready to face this year's wildfires. We're here to help you be prepared. #FireSmartBC pic.twitter.com/EB9L1khZhv