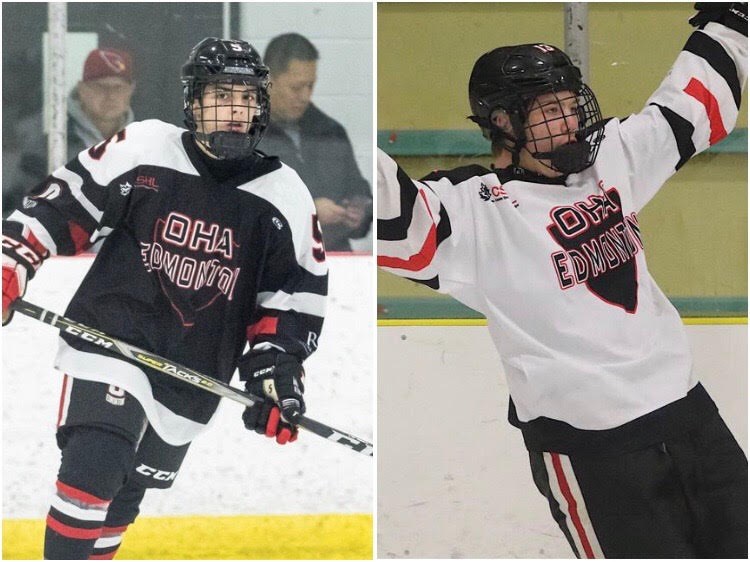 The Prince George Cougars have added two new players to the farm after the first round of the 2019 Western Hockey League (WHL) Bantam Draft.

After trading the second overall pick to the Winnipeg Ice, the Cats had the third and fourth selections in the first round Thursday morning (May 2), selecting two players, back-to-back, from the Edmonton Bantam Prep hockey academy.

Dowhaniuk was the Captain of OHA Edmonton this year.

“You always look at increasing your skill level on the back end and we feel like Keaton checks off all the boxes we were looking for,” said Cougars Director of Scouting Bob Simmonds after making the selection at the podium in Red Deer. “Puck-moving, plays hard, offensive driver, plays a lot of minutes, and we’re looking forward to having him in our organization. The game is fast, it’s a quick transition game. You have to get the puck up to the forwards quickly. Keaton can play that style and that’s the way we want our team to play.”

Ziemmer of Mayerthrope, Alberta recorded 76 points in 29 games with OHA Edmonton this past season, including 37 goals.

“His offensive skill is what stood out,” Simmonds added following the announcement. “He has great hands that allows him to score. We wanted to increase our skill level at all of our positions and certainly, Koehn does that at the forward position.”

When asked what Prince George was looking for when having two picks in a row, Simmonds was quick to answer.

“We’re looking at the best player and we certainly believe Koehn brings the necessary skill and required skills we’re looking for.”

Last season in the Alberta Minor Bantam Hockey League (AMBHL), the 14-year-old was named the league's Most Valuable Player, won the goal-scoring races with 33 goals for Spruce Grove, the top forward honour, and rookie of the year award.

Both players have represented Team Alberta on the provincial stage in their young careers; Dowhaniuk, in particular, was named an all-star at the 2019 Alberta Cup.

The Prince George Cougars made a total of 10 picks at year's WHL Bantam Draft and the remaining eight are as follows:

Prince George Cougars lose lottery, retain two of top five WHL picks
Mar 20, 2019 11:01 AM
Comments
We welcome your feedback and encourage you to share your thoughts on this story. We ask that you be respectful of others and their points of view, refrain from personal attacks and stay on topic. To learn about our commenting policies and how we moderate, please read our Community Guidelines.