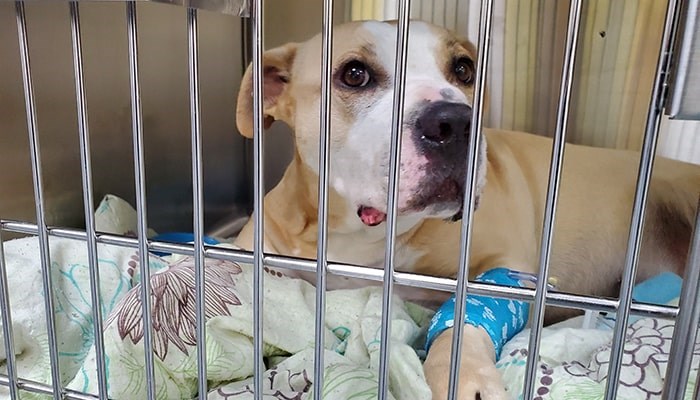 Meet Rocky, he’s an eight-year-old Staffordshire terrier with big brown eyes that will melt your heart.

He is also a support dog for a Metro Vancouver veteran suffering from post-traumatic stress disorder and currently homeless, living in an RV, after being renovicted.

Rocky was seriously injured in a car accident last week and needs expensive veterinary treatment before he can get back to doing his important job of helping his owner.

The pooch has been by Greg Wright’s side for the past six and a half years, helping him to cope with severe depression and anxiety.

The 45-year-old served with the Canadian Coast Guard up north and all over the West Coast of Canada before returning to live in Richmond.

“I’ve been in some unfortunate situations and I ended up leaving the coast guard after developing PTSD,” he told Vancouver Is Awesome.

“That’s when Rocky came into my life. He has been my rock. I’m here because of him. I can’t express in words what he means to me.

Wright described Rocky as stoic, with lots of energy and a love of people.

“He is the most gentle giant,” he said. “He is just a wonderful dog.”

For Wright, the thought of losing Rocky is all too much.

“It’s the toughest time I’ve ever had,” he said. “We’ve been together every single day since I adopted him. I’ve never left his side and he’s never left my side, until the accident.”

Wright told Glacier Media he was driving a borrowed car to a Food Bank last Wednesday, Sept. 11, when the accident occurred in Delta, just after he exited the Massey Tunnell southbound.

He said Rocky became nauseous on curving roads and tried to jump into the back seat as they were turning onto River Road. As Rocky went to move, he got his leg caught.

“I was driving with one arm and trying to get his leg over the passenger seat so he could get in the back,” Wright said. “I drifted off about a foot and a half and we ended up clipping a telephone pole, shearing it right off and flipping several times.”

Miraculously, Wright came out of the crash without serious injury.

Rocky suffered broken ribs and possibly other injuries in the crash and is now in the care of veterinarians at RAPS Animal Hospital, in Richmond, which is owned by the Regional Animal Protection Society. The not-for-profit does everything in its power to ensure people can get veterinary care for their pets in times of need.

Rocky is currently receiving special hyperbaric oxygen therapy, which counters inflammation and encourages natural healing, but requires an MRI to determine if there is a spinal injury, which could cost as much as $5,000. His entire medical care could run as high as $20,000.

RAPS has organized a community fundraising campaign to help pay for Rocky’s treatment.

Wright, whose only income is disability assistance, said he didn’t know what he would do without the support of RAPS.

“I had absolutely no money and that was not a concern,” he said. “The concern was the health of my dog. They are absolutely amazing people.”

Life has been tough for Wright, who has been unable to find an affordable rental that allows pets since being renovicted five years ago. Previously living in his RV at Steveston dike, the owner of Soggy Doggy Walking Services has allowed Wright to park his RV on his property for the past two years. While it is a safe place, it’s not the home Wright envisioned he would be in at this stage in his life.

Eyal Lichtmann, RAPS CEO, said the organization would accommodate Rocky for as long as he needs.

“This is a support dog for a veteran and we’ve got to make this work,” he said.

“He cannot afford at this time of his life, being homeless, to also lose the most important thing to him.

“We really want to help them. We are hoping the community steps up.”

It’s hoped that with all the required treatment, Rocky can make a full recovery.