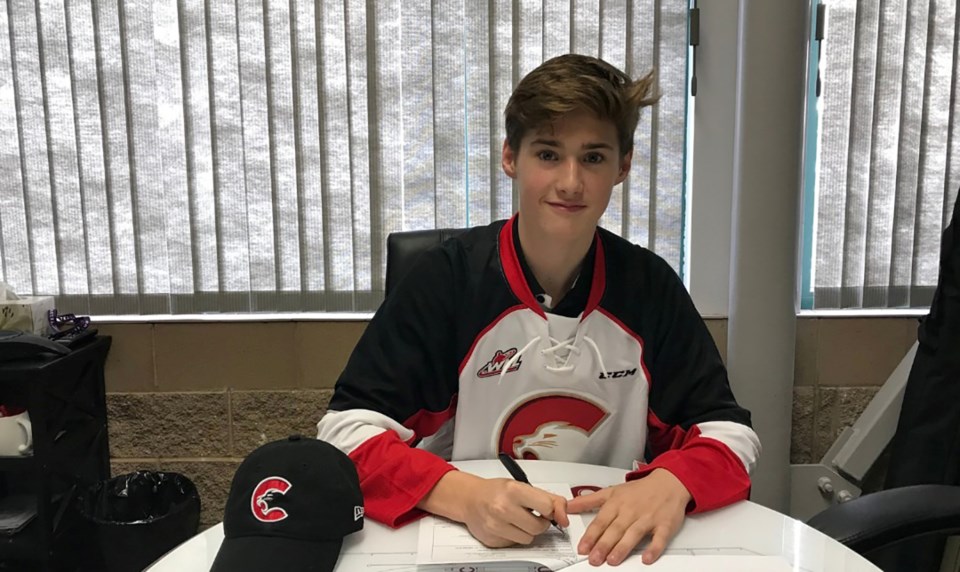 Nearly a month after a new player development partnership with six different regional teams was announced, the first player to be a prime example of that system has risen to the major junior ranks.

Aiden Reeves is a Prince George born-and-raised hockey player and has signed a Western Hockey League (WHL) Standard Agreement with his hometown Cougars.

He had joined the team’s 50-man protected list prior to training camp last month.

“Aiden is a local player that stood out at the Cariboo Cougars’ camp last month,” said Cougars’ General Manager and Head Coach Mark Lamb in a release. “He has grown a lot as a player since last season and he made an impression on our hockey staff at our Training Camp, earning himself a contract.”

The 17-year-old defenceman played last year with the Okanagan Rockets of the B.C. Major Midget League (BCMML) but led the Midget Tier One Cougars to a silver medal at the B.C. Championships in Fort St. John a season prior.

Reeves was the Rockets second-highest scoring blue-liner with 22 points in 28 games that included 17 assists.

He is likely to act as a ‘black ace’ for the 2019-20 season bouncing back and forth between Prince George and Cariboo in their respective leagues.

The WHL Cougars season starts at home on Sept. 20 against the Vancouver Giants.

We are extremely proud to announce the first signing of our new partnership with the @PGCougars! Aiden Reeves has officially signed a @TheWHL standard players agreement! #DefendTheNorth @BCHockey_Source @BCHockey_MML pic.twitter.com/OkOM9qMWUj