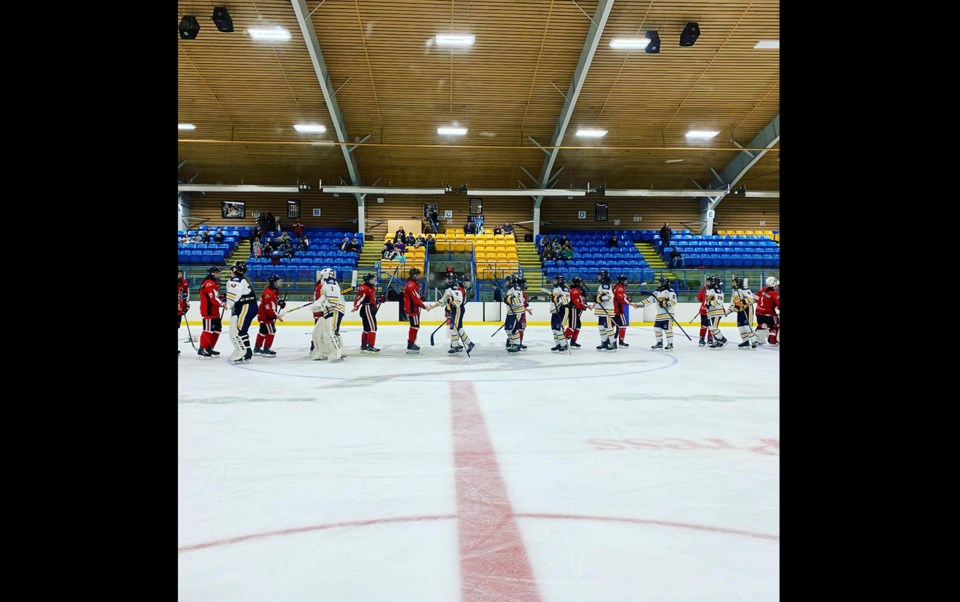 With the roster finalized and a few games under their belt, the Northern Capitals coaching staff is looking ahead to the start of, what could be, a year to remember.

Desjardins took that time off to watch his daughter Sage play university hockey in Calgary, followed by coaching at the bantam level of women’s hockey, but feels ready to get back on the bench.

He believes his diverse group of 17 athletes, including 12 returning players, have a determination to win it all.

“I can’t say enough of how much passion these girls have about developing their game and they’re very hungry for success,” said Desjardins in an interview with PrinceGeorgeMatters today (Sept. 17). “It's exciting to be coaching this group of girls for sure, especially since I’ve been out of this level for this long. “Are we going to win every game? No; we’ve already talked about that, but the main thing is to have a never-quit attitude and when you have that, anything can happen.”

This past weekend, the Caps were in Calgary as invitees to the annual FireStarter exhibition tournament, which sees 16 western Canadian women’s teams compete against each other.

Prince George’s squad didn’t win a game, ending with a 0-2-2 record, but Coach Desjardins saw something on the ice with his team he believes they can turn into something greater come October.

“We competed in every single game we played,” he explained. “That was the main thing we talked about was a ‘never quit’ attitude and every single shift they were out there, they were working their hardest.”

He adds it’s encouraging for himself, and his two assistant coaches Grace Barlow and Lauren Smaha-Muir, to see a hockey program display a high level of teamwork and responsibility.

“It's still early in the season [...] There's always some stuff to work on. We have some gaps in our games, whether it be getting on the same page in the offensive zone, or breaking out. We need to work on everything, but it’s definitely going be through progression this season and it’s not going to happen overnight. We certainly showed though that we can compete against the Alberta teams because they have some strong teams in that province.”

Desjardins has been involved in female hockey for several years now and sees more potential at the younger levels as most midget teams are a tad short on players.

While it may be the fact of not many interested girls at this time in Prince George hockey with regards to the midget AAA level, he says he’s noticing a spike in bantam, peewee, and atom level athletes whom he hopes will stay in the game for as long as they can.

“The future of your system is the younger groups,” he described. “We’re going to spend some time this year as a team mentoring the younger group and hopefully have them stay in the game after bantams, and that’s the important thing to keep that part of it strong so that it can support the major midget team in Prince George.”

The good news for him, the current Northern Capitals roster appears to have more skaters with all-around talent on offense and defense.

“All the skaters can shoot,” Desjardins said with a slight chuckle. “I remember back in the day, if you had five or six players with a hard slap shot, you were happy, but now, for me, all 15 skaters have a shot. That’s a big difference and it’s really encouraging to see.”

Desjardins says he’s likely to be a leadership group by the end of October once the team gets their feet wet in regular-season play.

The 2019-20 season for the Northern Capitals starts Oct. 4 to 6, when Surrey hosts a tournament for all five B.C. Hockey female midget AAA league teams.

Northern Capitals are up against the Fraser Valley Rush, Thompson-Okanagan Lakers, Vancouver Island Seals, and Greater Vancouver Comets in the hunt for their first provincial championship in three years.

In the 2018-19 season, they finished in third place after being swept in the playoff semi-final series by Fraser Valley.

.@NCapitalsfmaaa have selected 17 young women that includes 12 returnees & 5 rookies, all hoping to represent their region in their quest for a first B.C. title since 2016 🔴🏒 | https://t.co/Sq16K3WfF9 #CityOfPG @BCHockey_Female @PGMatters pic.twitter.com/S5ZEfwN6hi

Prince George goaltender’s international debut spoiled by Americans
Aug 16, 2019 12:35 PM
Comments
We welcome your feedback and encourage you to share your thoughts. We ask that you be respectful of others and their points of view, refrain from personal attacks and stay on topic. To learn about our commenting policies and how we moderate, please read our Community Guidelines.