'I would one day like her to see this;' Prince George man touched by woman's kindness on flight to Vancouver

Adam Woodrow was departing Prince George, but didn't expect the arrival he got
Apr 11, 2019 4:54 PM By: Jess Fedigan 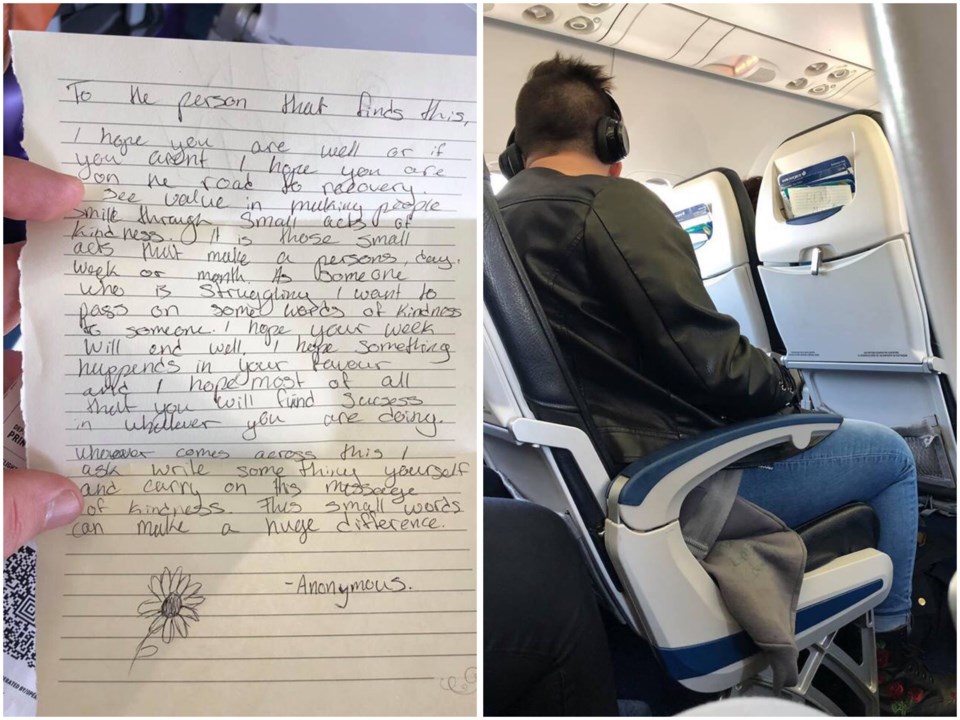 A note was left on an airplane after landing in Vancouver from Prince George; one local resident picked it up and was touched by the encouraging words. (via Adam Woodrow)

There can be kindness hidden in the clouds.

On March 29 on a flight from Prince George to Vancouver, Adam Woodrow wasn't expecting his trip to end the way it did.

He says it all began when he took the pictures of an incredible experience on the way down, but it slipped his mind to post them until he got back on a plane to come home to the northern capital two days later.

"It was interesting because I actually saw her in the (Prince George) airport before we left," he says. "When we were going out to the plane, she walked in between me and my friend and so she was walking down the aisle in front of me. She was trying to get her bag in the overhead, it was getting stuck so I gave her hand and she turned around and gave me this really big, bright smile and thanked me for helping her out."

Woodrow says once he got into his seat and they took off, he noticed that she had pulled out her notebook, which was visible as the woman was sitting across the aisle from him. He says she wrote in the journal for the whole duration of the one hour flight.

"She was writing for over an hour," he tells PrinceGeorgeMatters. "I don't see many people doing that so I thought that was interesting. At the end of the flight when we were just touching down, she ripped a page out of her notebook."

It was shortly after landing that Woodrow would find something truly touching. 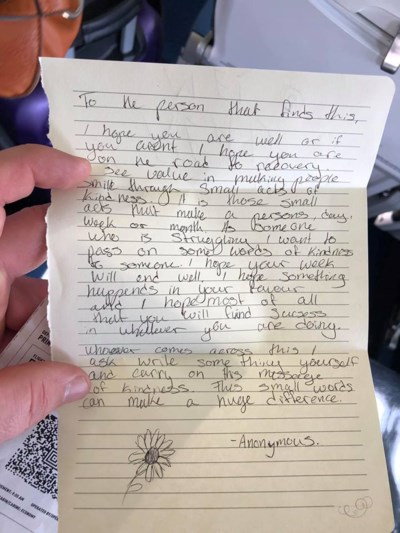 The note Adam Woodrow found filled with kindness on his flight to Vancouver. (via Adam Woodrow)

"She put it in the seatback in front of her," he says. "I just thought that was curious. She wrote 'read me' on it so I was just curious. The funny thing was, I kind of held my buddy back and we waited until everybody was off the plane and I grabbed it. I kind of felt like I was eavesdropping, I felt like I was intruding a little bit, so I read it."

'I was just really impressed," Woodrow says. "It said in the note that she was struggling and focusing on her own struggles, but she wanted to sew some blessing onto someone else. It was just an amazing demonstration of someone who needed something so she was putting it out there."

"That's why I wanted to share it and make it go as big as it could," he adds. "I would really one day like her to see this and realize how big this was. I have been way more blessed by this than she has so far. I've seen it go around the world already. I feel really blessed to be a part of this."