In B.C.'s South Asian hub, Trudeau's blackface 'will have an impact' 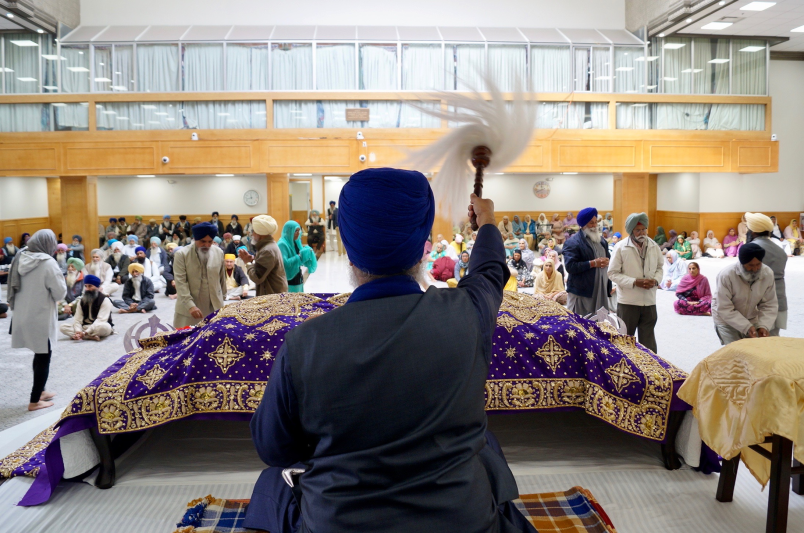 Worshippers appeared to be getting on with their day, just as any other, at Guru Nanak Sikh Gurdwara in Surrey Thursday morning, the day following the publication of photos of Justin Trudeau wearing blackface makeup, including a picture of the future prime minister at the age of 29, when he was a teacher in Vancouver.

But make no mistake – Trudeau’s past gestures will have social and political ramifications in Surrey, says one of the temple’s leaders Gagan Singh.

“We will be teaching people, don’t take this thing very lightly. This thing will be hurting your future, to your children,” said Singh, who says he’s worried about continued mistreatment of turban-wearing children at schools.

Surrey is home to B.C.’s largest South Asian community – a politically diverse, complex and active one at that. Census data show Surrey’s 168,040, mostly Sikh, South Asians make up nearly 10 per cent of the country’s South Asian population of 1.9 million residents, who identify mostly as East Indian but also Punjabi and several other minority groups.

“Surrey, along with other suburbs of Vancouver, are what many call battleground ridings,” said Hamish Telford, associate professor of political science at University of the Fraser Valley. “The Punjabi community supports parties of all stripes,” he said.

Surrey lawyers Amandeep Singh, left, and Justin Thind, right, support the NDP and Liberals respectively. They spend much of their free time in the office talking politics and see Trudeau’s blackface actions as having an impact in Surrey. (via Graeme Wood)

But Trudeau’s 2015 political brand of “sunny ways” and his championing of social justice causes and multiculturalism led to a sweep among the five ridings the municipality encompasses, said Surrey lawyer Justin Thind, a Liberal supporter (and former Liberal government employee) whose firm is next to the busy Gurdwara on 120 Street.

Thind, at first, struggles to find words after being asked to describe his feelings toward revelations that his namesake dressed in blackface multiple times.

“I really think it’s harmful to those who have had to deal with racism,” said Thind, born in Saskatchewan in 1972 to South Asian immigrants who adored Prime Minister Pierre Trudeau so much that they named their baby after his recent newborn, Justin.

Thind surmises Trudeau was raised in a “bubble” where there was “normalized behaviour within a segment of the population.”

He calls Trudeau’s blackface pictures “troubling” and “problematic” and there is no doubt in his mind that “it will have an impact” in Surrey.

But Thind isn’t ready to give up on Trudeau, just like the leader’s South Asian incumbent Members of Parliament turban-wearing Randeep Sarai and Sukh Dhaliwal of Surrey Centre and Surrey-Newton, respectively. The two made social media posts Thursday condemning Trudeau’s actions but ultimately standing by their remorseful prime minister who they contend has advanced the dial on diversity and acceptance.

Whereas Trudeau and the Liberals had been attacking opponents for their own social faux pas, Thind sees the Liberals now having a much tougher go at re-election by now having to stand by their policies and results since 2015, some of which they may get “hammered” on, such as four years of deficits.

“I think it’s going to affect voters in the South Asian community and in the greater population in these two ridings,” said Thind. “It will call into question his genuineness and sincerity in terms of the policies the Liberals put forward. I think that will be the largest hurdle for the Liberal party.”

Telford said it is too early to determine the precise political fallout but added, “It will give everyone pause to reconsider their decision.”

Thind’s business partner and fellow political junkie is Amandeep Singh, who worked on NDP leader Jagmeet Singh’s Burnaby South campaign last winter. The former 2017 BC NDP candidate was reportedly instrumental in petitioning the Trudeau government to apologize for the Canadian government’s having turned away the Komagata Maru, a boat carrying over 300 Sikh migrants from India, in 1914. The incident resonates in Canadian Sikh history, and this year the City of Surrey named a street after the boat. Another notable public milestone for Aman was his defense work in the Air India Bombing trials. He was less sympathetic toward Trudeau than Thind.

“It was 2001. That’s a trope that’s been around for decades. Mimicry has been used as one form of power used against oppressed people all the time. You see that with black people, with Asian accents, you see that with fat shaming,” said Aman, who worries about the repercussions despite some partisan advantage.

“I think this will translate into some votes for Jagmeet, but my fear is, I think, if it carries on like this, it will have the effect of keeping people at home, which is unfortunate,” said Aman, with Thind nodding back.

Prior to the revelation by Time magazine, both men were confident that broader issues, such as transportation and housing affordability for families, would carry the day in Surrey, as opposed to matters of identity – although they also agreed that Jagmeet Singh’s Sikh identity would resonate with some swing voters, all things being equal.

Now, Aman sees a bigger conversation developing and he ties it in to what he calls “privilege.”

Trudeau’s lack of judgment and upper class privilege back then reflects in his policies now, said Aman, contending that the Liberals back corporate interests, which run contrary to underprivileged and middle-class interests. And, said Aman, Trudeau’s hypocrisy of extolling such a virtuous lifestyle is also evident in the alleged hypocrisy of his policies on the environment or Indigenous issues, among others.

Thind agrees that Jagmeet Singh’s handling of the blackface revelations so far “is going to resonate” and the Conservatives will exact their own pound of flesh by honing in on Trudeau’s authenticity (with pre-blackface anti-Trudeau slogans such as “not as advertised”).

Telford said the Conservatives were hurt in Surrey’s immigrant-rich ridings in 2015 due to “peculiar positions” such as proposed policies to identify barbaric cultural practices and banning the niqab for public servants. In 2011 the Conservatives won three of Surrey’s five ridings, albeit those on the outskirts, which are predominantly white.

According to Gagan Singh, Trudeau’s Surrey- and Sikh-centred policies were questionable before the blackface revelations. Gagan said Trudeau had already fumbled the political football in Surrey, leaving the race open to the party that best supports improved transportation and port infrastructure and trade relations with U.S. President Donald Trump (Gagan is a spokesperson for the United Truckers Association and Surrey borders the busiest crossing to Washington State).

Another issue Gagan raised was Sikh separatism, which is a hot-button topic within Surrey’s hyperpolitical temple scene.

“On one side he’s doing Vaisakhi celebrations. The same side, his terrorist threat report to Canada, he’s bringing Sikh names into that report,” said Gagan.

Trudeau’s appearance as Aladdin in 2001 at a West Point Grey Academy fundraiser weakens his “integrity” on such files, said Gagan.

Jagmeet Singh had to address his views on Sikh separatism in a May 2018 public statement. In it, he condemned terrorism but said he supports self-determination and human rights and cautioned of “attempts to oversimplify these experiences.”

Gurdwara president Harpreet Nijjar was reportedly accused of terrorism by India – an accusation he’s denied. Speaking next to Gagan at the temple, Nijjar said he’s impressed with Jagmeet Singh’s dedication on human rights. Gagan said the NDP’s Pharmacare plan will resonate in the South Asian community as will its commitment to alleviate the opioid overdose crisis.

“The big thing is he’s in favour of keeping big pharmacy corporations out of the picture,” said Gagan.