That's the message as a beer named after the downtown Prince George street hits the shelves and construction begins on a brand new five-storey George Street building.

CrossRoads Brewing held an event this afternoon (Aug.27) to celebrate the release of the brewery’s George Street Brown Ale four-pack tall cans and to highlight the neighbouring mixed-use development which is now under construction. 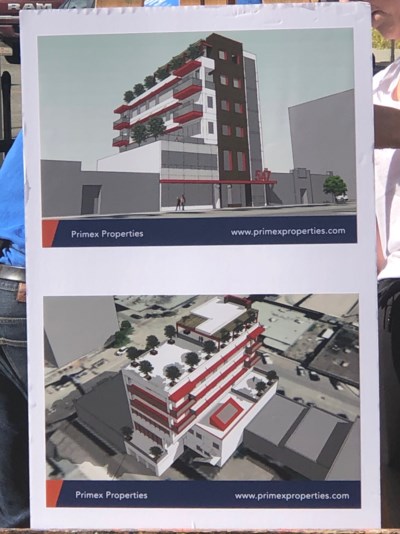 The new building will be constructed at 547 George Street features new residential, office and retail space, in addition to their development of the former Ric’s Grill building next door which now houses Birch & Boar Charcuterie & Provisions.

“We are looking at a five-story mixed-use building. It will be one of the first in the city of Prince George to be mixed-use. We will have retail on the ground floor and commercial on the second and third floors, and then the fourth and fifth floors will be residential apartment units,” explains Leboe.

He says there will also be livable rooftop patios on the fifth and sixth floors.

This building will also be the first private building in the city to meet passive house standards.

“It’s essentially a super-insulated building envelope. We control all manner of air going in and out of the building,” says Leboe. “We expect to use about 70 to 90 per cent less energy than a building built to the standard B.C. building code.”

At the announcement, Mayor Lyn Hall also shared a few thoughts about the changing face of George Street.

“When you talk about George Street it has come back,” says Hall. “That was really a focus of ours in 2015. How do you recreate what was once the main corridor and the main street for entertainment and hoteliers in the city and I think we have really met that challenge.”

George Street and the surrounding area, which for a long time had been home to many empty buildings, has seen some turnaround over the last few years.

Some of the other recent projects include:

“George Street has historically been the main street of Prince George with many commercial, hospitality and lodging businesses,” notes Alyssa Leier, the Curator at the Exploration Place, who spoke at the announcement.

“This part of Prince George was the centre of life in this part of the world back in the day and we are seeing it happen again,” added the Exploration Place’s CEO Tracy Calogheros.