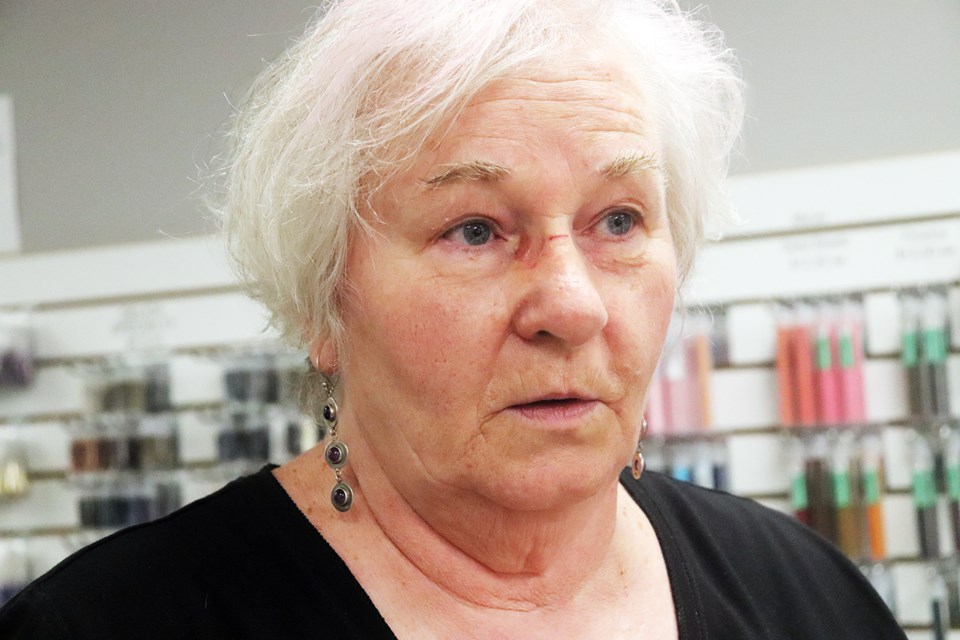 Kate Roxburgh suffered injuries after allegedly being assaulted outside her store by a shoplifter. (via Kyle Balzer)

This past Tuesday (Oct. 22) was enough for a local business owner who now says she will move, sell or close.

Kate Roxburgh was in her store, Topaz Bead Gallery, when she says she caught a woman trying to steal a $300 necklace from her store and swiped a necklace and confronted her.

She says the thief refused to give her anything back, swearing at Roxburgh repeatedly.

She also had a customer in the store at the time of the incident, who saw what was going on and called 9-1-1.

"There's something going on here," Roxburgh said of her recollection of the afternoon when the customer called authorities. "Eventually, she [the thief] pushed past me and pushed, managed to push the door open and we ended up out on the sidewalk."

The customer remained on the line with Prince George RCMP. She says the police told the customer to just let her [the alleged thief] go, which she wasn't going to do easily.

"I had her by the lapel of her coat," Roxburgh said. "I have strong hands because I do leatherwork, I hung on with one hand."

The customer was still on the line with police when the thief swung around and allegedly hit Roxburgh in the face, leaving a gash on her nose which has since resulted in headaches. She says she tried to go to the gym as she normally does but the pain from the headaches was too intense.

"It still hurts so much," she said.

She says RCMP never showed up until the morning after the altercation.

Roxburgh adds she never got an explanation as to why they didn't come when they were immediately called by the customer in the store, adding police allegedly asked the customer after she had been hit if they still wanted them to come.

Her partner and herself added the situation could have been a lot worse with the alleged thief possibly having a weapon or a dirty needle.

While PrinceGeorgeMatters was in the store earlier today (Oct. 25), others came in to check on Roxburgh and her partner and offer her support.

But sadly, this isn't the first time Topaz Bead Gallery has had issues downtown.

Roxburgh says one week, they were broken into twice.

They've been in their current building since January and now, they're going to be leaving this coming January. The company has been in downtown Prince George for 13 years.

Roxburgh recalled a time when there used to be foot and bike patrols by the RCMP roughly eight years ago but were cut due to funding. She also claims the city does nothing to help businesses.

"The city will do nothing," said Roxburgh. "They [the RCMP] say they don't get money from the city and the city says we give the money to the RCMP, they need to allocate it. RCMP says they [the city] allocate the funds."

She says police told her that she can open a file, which she felt was inadequate to address the issues.

"Nothing is going to happen," she said.

As other businesses are also frustrated, Roxburgh says she's had enough, fearing for her safety being in the store or going outside and in the back of the store outside.

"Social media posts are rarely the full story and often contain opinions and emotions, and may lack facts," Cpl. Craig Douglass says in a release. "After reviewing audio recordings, time-stamped documents and speaking with personnel, the Prince George RCMP would like to provide details of the situation."

He alleges Roxburgh didn't want police to assist and that she wouldn't cooperate after a call was placed at roughly 2:50 p.m. to North District RCMP's Operational Communications Centre.

"With no cooperation from the victim, details of the event, description of the suspect or specific location, officers were not dispatched."

Douglass goes on to say an operator allegedly convinced Roxburgh to speak with them and an officer.

"The operator continued to speak to the victim and eventually convinced her to cooperate and speak with an officer.  A police file was created at 3:04 p.m., 14 minutes after the first call to police. The victim provided a description of the suspect which was sent to all police officers at that time."

The release says an officer went down to the business at 6:18 p.m. that day to gather a statement, but doesn't say specifically if Roxburgh was there at the time.

"The Prince George RCMP want to warn the public about taking action when a crime occurs," the release adds. "Calling 9-1-1 as soon as it is safe to do so and providing details of the incident including a suspect's description, is the best course of action, the one most likely to result in an arrest, and is the safest."

Police have also provided a description of the suspect.