'It really comes down to one thing and that's respect': UNBCFA not backing down from fair agreement as strike looms 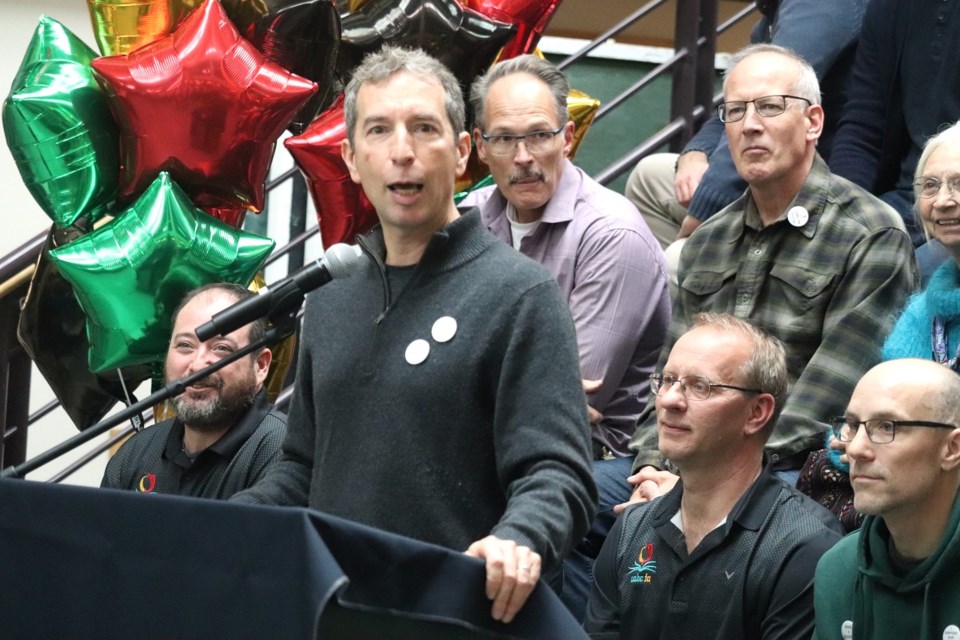 The UNBC Faculty Association is calling on the university to negotiate a fair deal. (via Jess Fedigan)

The UNBC Faculty Association (UNBCFA) made their message loud and clear on campus: it comes down to respect.

That was the message at a rally held at the university earlier today (Nov. 6) with the UNBC Faculty Association President Stephen Rader as the leading voice amid the reality of teachers being behind picket lines tomorrow morning (Nov. 7).

"I want to make one thing very clear," Rader said at the beginning of the rally. "There's not a single member of the faculty association that wants to strike either this time, or the last time."

The association has been involved in negotiations with the university since March over a new agreement for members, but officially served 72-hour strike notice on Monday (Nov. 4).

"The two sides have been in bargaining since Mar. 5 in what was expected to be a quick round of negotiations since the parties are in agreement about the key issue: UNBC faculty’s rock-bottom salaries," said a recent UNBCFA news release.

The association represents the teaching staff at UNBC's Prince George and regional campuses and serves the interests of almost 500 full- and part-time members.

All faculty employed by UNBCFA, including tenured and tenure-track faculty members, senior lab instructors, librarians, and contract academic staff in all categories, are automatic members in the association, which acts as the sole bargaining agent for all UNBCFA members, negotiating the terms and conditions of their employment.

The Confederation of University Faculty Associations of British Columbia (CUFA BC) have also provided their support to the association through a letter dated Nov. 4 to the UNBC Board of Governors.

"We are disappointed that bargaining has reached impasse and urge the Board of Governors’ bargaining team to bring proposals that address the outstanding issues at the table in order to avoid labour crisis on Thursday," the letter said.

"CUFA BC supports UNBC FA in its commitment to a fair contract. UNBC faculty deserve sector-norm salaries and to preserve their hard-earned rights already agreed to in previous rounds of collective bargaining. CUFA BC appeals to the Board of Governors to participate in meaningful collective bargaining and to right the tenuous labour relations between faculty and administration. The picket line does not have to be inevitable. You have the authority and responsibility to avoid this labour crisis through fair contract negotiations."

We’re here at @UNBC where the Faculty Association are holding a rally as stoke action looms with no deal yet met #unbc #cityofpg #faculty #teachers #university @PGMatters pic.twitter.com/ArjURHCFD6

Rade said the administration has been saying they've offered a very "generous" salary offer while he believes they have been trying to make faculty look like they are ungrateful with their offering.

"My happy place is in the lab, with my instruments and talking to my students."

"I think it really comes down to one thing," he continued. "And that's respect. In order for the university to thrive and prosper, it has to be built on respect for everyone that works here and it's not just faculty, it includes everybody."

Numerous other faculty members were also in attendance for the rally, with many others speaking out on the need for a fair agreement to be reached, with both sides showing respect for one another.

The UNBC Faculty Association negotiates, monitors and upholds the conditions of employment for association members, according to the description on their website.

UNBC has not released any statement since the strike notice was issued this week.

- with files from Hanna Petersen, PrinceGeorgeMatters and The Canadian Press