It's like a potluck: Best tweets and puns so far from cannabis legalization 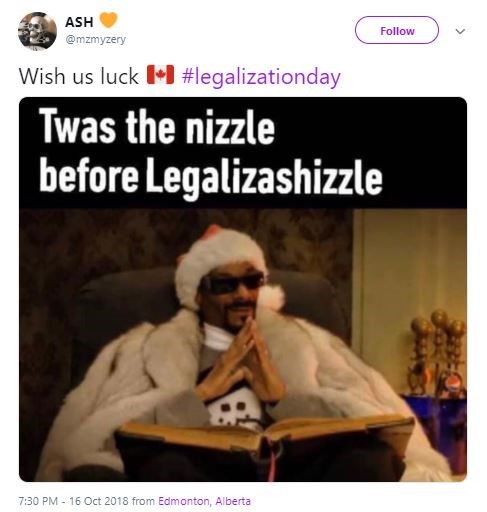 Cannabis is officially legal in Canada, and naturally, some had fun with it. (via @mzmyzery/Twitter)

Well, it's official: lighting up a joint in Canada is now legal.

To mark this historic day, we've decided to be blunt and pick some of the funniest tweets from the social media platform.

Who doesn't love a good pun?! This company gets high praise.

With the legalization of cannabis, stay safe and roll in with style via shopping cart 😂 #CannabisLegalization #legalizationday pic.twitter.com/e1XJtDzFe3

We don't judge anyone, marijuana might not be your thing.

And this guy seems to still be in shock that he can now buy cannabis, from...the government.

I just bought weed... online... from the government.

Does anybody out there know if there is such a thing as a smog horn?

Smog warning across Canada for next three days #legalizationday

This American citizen seems to be thinking about changing country? We do love our neighbours to the south!

But, they seem to be implying that we say things weirdly.

They'll be smoking a bloont

Marijuanada has a nice ring to it, no?

I do know it can no longer be Weedless Wednesday so why not simply #WeedWednesday or #WW for short.
In any case remember to PuffPuffPass eh. pic.twitter.com/KFLf5WG97f

Yeah guys, what is the big fuss about?!

And then there are American citizens who know how friendly we already were before cannabis legalization.

Apparently now marijuana will be one of Canada's staples next to maple syrup and poutine?

And we all know how Snoop Dogg feels about marijuana legalization.

If you weren't totally open about being a cannabis user, maybe now people won't be as closed off about it.

All the closet pot smokers be like tomorrow at the cannabis a shops #legalizationday pic.twitter.com/YIbKopGw4M

Fast food restaurants are probably thinking how much higher their sales will go up.

The line up for #McDonalds line up tomorrow. #legalizationday pic.twitter.com/9RSLx6238a

Don't think this is the right pot, but they're on the right track!

My grocery store is almost out of President’s Choice Decadent Chocolate Chip Cookies, so you know what that means? Tomorrow is the #Weedpocalipse #LegalizationInCanada #WeedWednesday #LegalizationDay #WeedThePeople

Make sure when you say, "This buds for you!" you are clear what you mean; otherwise, you may end up beer and you might not like it.

Now when somebody says, "This Buds for you" they'll have to be more specific. #WeedWednesday pic.twitter.com/eaeulqSuPv