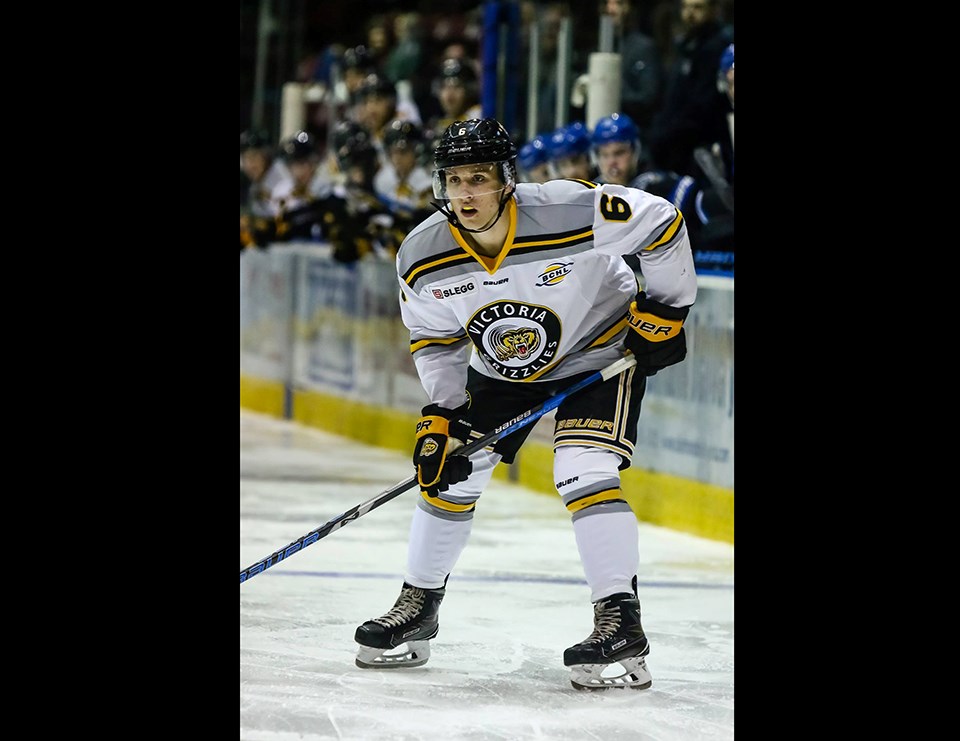 Prince George hockey product Jarin Sutton is set to join the Spruce Kings after being acquired from the Grande Prairie Storm of the Alberta league ahead of today’s (Jan. 10) junior ‘A’ trade deadline.

The 20-year-old has bounced around western Canada since capturing the BC Major Midget Championship with the Cariboo Cougars in 2017, when he tallied 23 points in 32 regular-season games as the team’s fourth highest scoring defenceman.

“Jarin is a great young man who plays the game hard and will provide some size, experience and physical play to our backend. He’s excited to be coming home and we’re excited to have him.”

Sutton suited up in stints with the Kelowna Chiefs (Junior ‘B’), the Victoria Grizzlies (seen in above photo) and Grande Prairie, and was named an alternate captain with the Storm for the 2019-20 season.

The six-foot-one blue-liner recorded 19 points in 37 games before today’s trade, including six goals; in junior ‘A’, he boasts 40 points in 102 tilts.

Prince George also stayed in Alberta for a second trade this morning.

The ‘Kings are receiving Jackson Zloty from the Calgary Canucks, a junior ‘A’ sophomore who has just 15 points in 41 games this season.

The 19-year-old forward is set to surpass his rookie stats, in which he accumulated 16 points, including eight goals, from the 2018-19 campaign.

“Jackson is a good skating skilled forward who adds another good veteran piece to our lineup,” Hawes added about the Calgary product.

“Depth and experience are always important, especially as we head down the back stretch of the season.”

Both acquisitions, the Spruce Kings sent ‘future considerations’ to Grande Prairie and Calgary.

The Spruce Kings have 18 games left in the regular season and sit fifth in the BCHL’s Mainland Division standings with a record of 14-21-2-3.

Currently, the team is on a three-game winning streak going into this weekend’s home doubleheader with the Surrey Eagles, whom the ‘’Kings are neck-and-neck with.