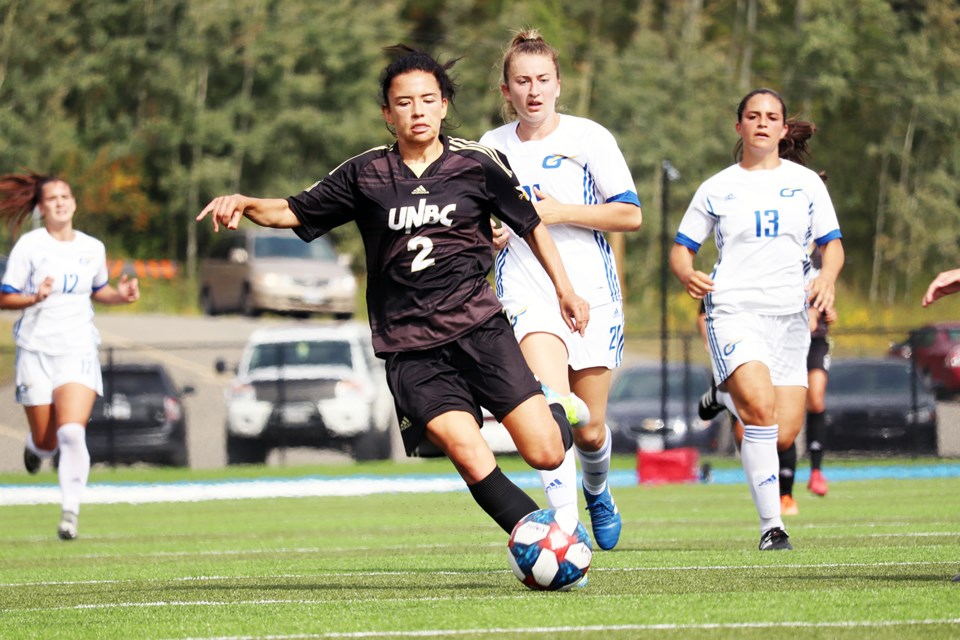 How can you not be entertained?

The UNBC women's soccer squad has already shown two games into this season, they'll be a force to be reckoned with all year.

After winning their season opener against the TRU WolfPack on Thursday (Sept. 5), 1-0 thanks to a Paige Payne goal, they were back at it again this afternoon (Sept. 7) at Masich Place Stadium against the UBC Okanagan Heat.

The Timberwolves struck first after Sophia Jones finished on a throw-in from Julia Babicz in the 14th minute to put UNBC up 1-0.

Late in the second half saw two more goals. Jones would strike again with her second of the match assisted by Paige Payne and just minutes later, Fort St. John product Claire Turner would add a third goal for the Timberwolves. It was also her first university and Canada West goal.

“It’s crazy to have my name up there with some of the best Timberwolves I have ever seen,” Payne said postgame. “Sid Roy is an amazing player. I looked up to her, and it is special to be up there with her name. As a program, we are growing every day, and I hope to keep the points coming.”

With an assist on the Sofia Jones goal, @PaigePayne74 becomes the all-time points leader in @UNBCWSoccer history, passing @sidney_roy! pic.twitter.com/puXRLlRn0l

There could've been a highlight-reel goal just minutes later when UNBC's Julia Babicz found herself alone with just the goalie to beat but was the wrong way. That didn't stop her with a cheeky back-heel that ended up in the net which sent the fans into a frenzy only for the goal to be disallowed due to being offside.

“Our team is learning to play together, which is awesome,” Jones said in a release after the match. “A lot of the first years have really stepped up and added to our team. That really makes a difference.”

UNBC ended the game with 13 shots while UBCO finished with eight. Shots on target also favoured the Timberwolves eight to five.

They've also yet to allow a goal against in their first two games of the 2018-19 season.

The UBCO Heat meanwhile have yet to win a game, dropping to 0-2-0.

POSTGAME! Fresh off breaking the @UNBCWSoccer all-time points record, The Pride of Kitimat, @PaigePayne74 talks about the milestone, her former teammate @sidney_roy, and her @UNBC teammates! Congrats, #PP7!! pic.twitter.com/UCq1Snkt0o

Next up for the Timberwolves is the University of Saskatchewan next Saturday (Sept. 14) in Saskatchewan at 1 p.m. PST.

Fulltime! Your @UNBCWSoccer walks away with 3 points after two Sofia Jones goals and Claire Turner adding the third against @UBCOHeat