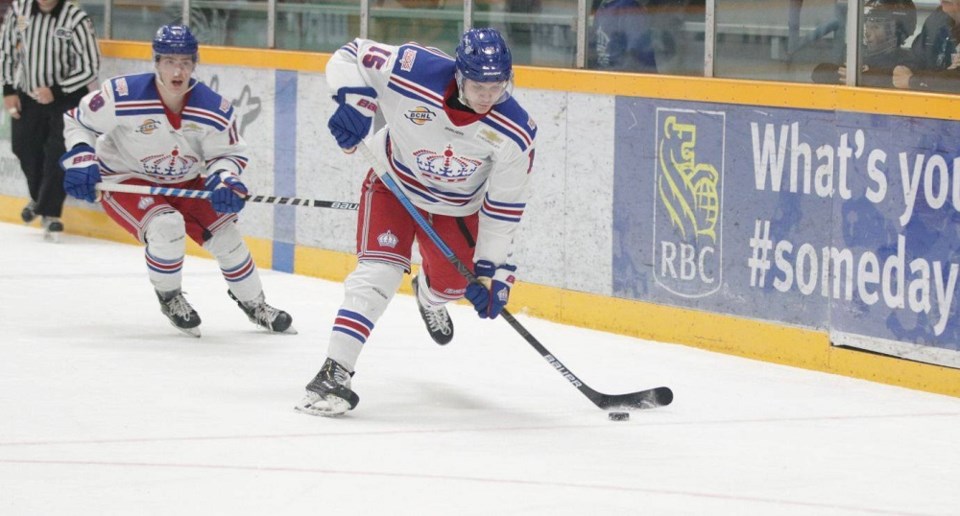 A Prince George Spruce King was able to reach another junior ‘A’ career-first this season, coming in the form of a hat-trick Saturday night (Nov. 2) on home ice.

Kolton Cousins, in his 13th game with the defending B.C. Hockey League (BCHL) champions since coming over from Cowichan Valley, scored three goals including the game-winner in the third period, part of a milestone night for the 18-year-old in aiding his team to a 6-3 triumph over Langley.

The double-up victory completes a weekend sweep at the Rolling Mix Concrete Arena (RMCA) and pulls Prince George just a little bit further ahead of the Rivermen in the Mainland Division standings.

Defenceman Evan Orr also had a three-point night of his own, assisting on Cousins’ first two goals and lighting his second lamp of the season with (literally) one second left in regulation while on a man-advantage.

Cousins helped on Orr's goal to complete his four-point, first-star performance in front of more than 800 fans.

Spruce Kings coach Alex Evin once again called on Jett Alexander to man the cage yesterday and earned his eighth win of 2019-20, making 26 saves on 29 shots.

Prince George and Langley exchanged tallies three times, going 1-1, 2-2 and 3-3 before the home team rolled away in the final frame.

The other two goal-scorers for the ‘Kings were Corey Cunningham and Ryan McAllister, both in the second period and both coming on power-plays.

The win bumps Prince George’s record to 8-9-2-1 (19 points) and pulls them a game-and-a-half ahead of the Rivermen (16 points) for third place in their division.

With the short homestand coming to an end, the red, white and blue will endure another three-game road trip through the lower mainland this week.

The Spruce Kings will start in Coquitlam Wednesday (Nov. 6), will move on to Surrey on Friday (Nov. 8) and finish in Chilliwack on Saturday (Nov. 9).

Second Western Hockey League player joining Prince George Spruce Kings
Oct 22, 2019 4:20 PM
Comments
We welcome your feedback and encourage you to share your thoughts on this story. We ask that you be respectful of others and their points of view, refrain from personal attacks and stay on topic. To learn about our commenting policies and how we moderate, please read our Community Guidelines.