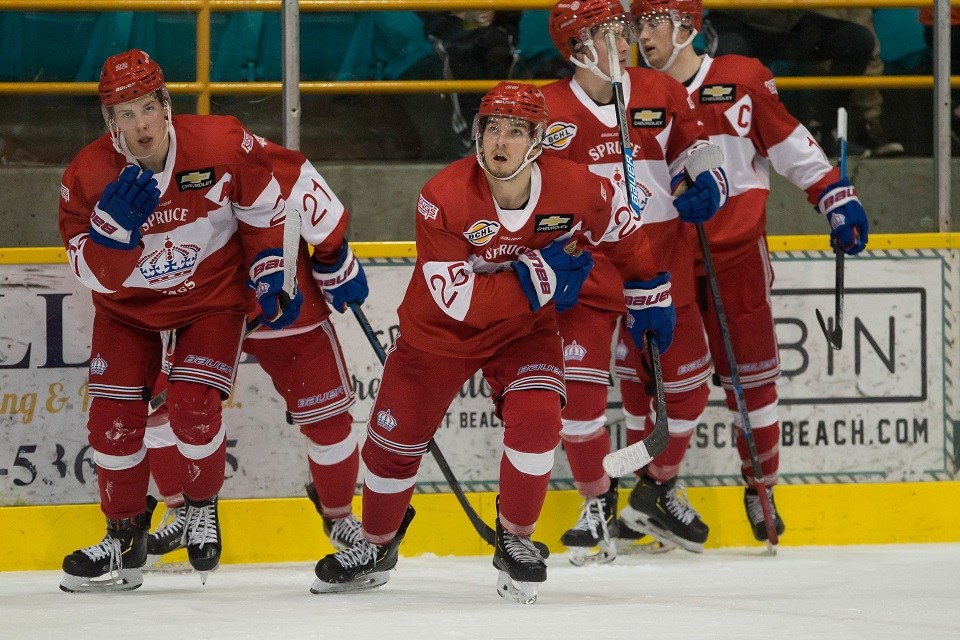 The Prince George Spruce Kings, much like their Cougar brothers in the WHL, are leaving 2019 in the rearview mirror with a statement in winning back-to-back games to close out the calendar.

They defeated the Langley Rivermen on the road in overtime by a score of 5-4, thanks to the heroics of Nick Poisson in his third game back with the team after participating with Team Canada West at the 2019 World Junior ‘A’ Challenge.

Poisson also scored during regulation time for his eighth multi-point game this year.

Carter Woodside and Jett Alexander split the goaltending duties Sunday afternoon (Dec. 22), but it was Woodside earning the win after stopping 13 of 14 shots.

Alexander was pulled after allowing three goals on 12 shots through the first period-and-a-half.

Prince George got on the board first with Wil Kushniryk’s second of the season, his first since returning from his loan to the WHL’s Calgary Hitmen, coming 43 clicks into the contest.

The 1-0 lead stood for only 65 seconds when Langley tied it up and kept it that way through the opening 20 minutes of play.

The middle frame was busy with each team exchanging a pair of goals.

After Langley made it a 2-1 game, Poisson’s first of the evening came on a power-play with help from captain Nolan Welsh and Corey Cunningham.

The Rivermen regained the one-goal advantage at the midway mark of the period, but Cunningham responded with his 14th of the season, also on a power-play with an assist from Fin Williams, making it a 2-2 tie after 40 minutes.

A penalty shot was awarded to Langley early in the third, in which Kalen Szeto capitalized on the opportunity to pull the home team ahead 4-3.

Nearly 10 minutes went by with the Spruce Kings needing a tally and Preston Brodziak was able to deliver the goods, scoring his third goal in the last two games with 6:06 in regulation.

The final buzzer sounded, but overtime was over virtually as soon as it began as Poisson sent his teammates home for the holidays with the 5-4 triumph.

The 2020 portion of the season in Langley once again to face the Rivermen on Friday, Jan. 3.

Prince George returns home to the Rolling Mix Concrete Arena Jan. 10 and 11 for a weekend doubleheader against the Surrey Eagles.

Three points from Preston Brodziak gets Prince George Spruce Kings out of losing skid
Dec 21, 2019 7:35 AM