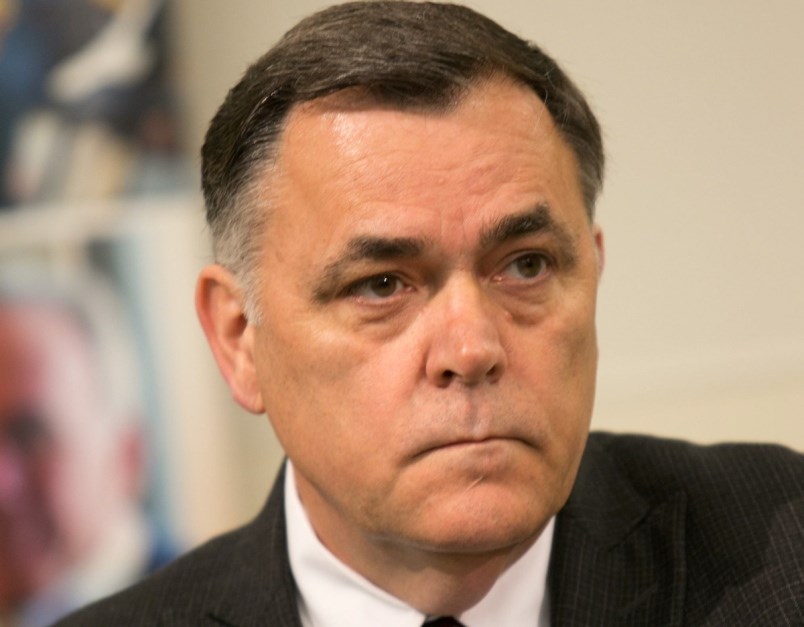 Darryl Plecas is the Speaker of the B.C. legislature. (via Darren Stone/Times Colonist)

Plecas released a 32-page report Thursday (Feb. 21) that calls into question many of the defences provided by clerk Craig James and sergeant-at-arms Gary Lenz in response to allegations of “flagrant overspending,” lavish trips overseas, large retirement payouts and cash payments in lieu of vacation time.

Lenz and James have said the expenses were work-related and important to the functioning of the legislature, adding that many of them were approved by Plecas himself. They have said they have done nothing wrong, and have questioned the accuracy and truthfulness of Plecas’s accusations.

In his latest report, Plecas alleges that James organized an earthquake preparedness conference in Washington state in August 2017 which amounted to no more than a $1,024 whale-watching trip for eight people and $1,073 worth of tickets to a Seattle Mariners baseball game.

The official-sounding agenda for the Washington trip was misleading, Plecas alleges. He says a whale-watching trip was listed as “Tsunami Watch: Guided tours of Haro Strait and Juan de Fuca Strait with explanations of aquatic life and seismic activity” and a baseball game at Safeco Field was described as “Safe passages: Large-Scale Evacuations.” Lenz and James’s spouses were also on the trip.

Plecas notes there was no prearranged conference in Washington state that required travel there; rather the trip was arranged by James.

“What in fact appears to be the case is that their extensive ‘work’ travels served as their de facto holidays,” Plecas writes. “If this weren’t so serious, it would be the stuff of comedy.”

James and Lenz have been suspended since Nov. 20, when they were escorted out of the legislature by police.

The legislative assembly management committee, a panel of MLAs that oversees the running the legislature, agreed Thursday to appoint a retired Supreme Court justice to report on whether Lenz and James engaged in misconduct. The independent report will not interfere with an ongoing RCMP investigation, said NDP house leader Mike Farnworth.

The retired judge could make recommendations on whether the two senior legislative officers should remain suspended with pay. James was paid a salary of $347,090 in 2018 and Lenz was paid $218,167.

Plecas said he will recuse himself from any matters relating to the independent report, including creating the terms of reference and selecting the retired judge.

The Speaker told reporters after the committee meeting that he made the recommendation to recuse himself because “we’ve reached a place in all of this where so much of the information was presented by myself. I think most people would say that at some point I should step back and say it should be someone other than me who is making comment.”

The retired judge’s review will run parallel to auditor general Carol Bellringer’s forensic audit of the legislature’s finances and a workplace review that will look into allegations that legislative staff members were fired after raising concerns about questionable expenses.

In his latest report, Plecas writes that “the house leaders need to decide whether confidence in these two officers has been undermined to the point that, regardless of the outcome of the further processes, audits and investigations, Mr. James and Mr. Lenz cannot realistically return to their positions as the senior executives of the legislative assembly.”

Plecas raises concerns about the lack of oversight and accountability for the clerk and the sergeant-at-arms: “Why are these officers travelling all over the world like dignitaries, spending enormous amounts of money and justifying it all by their bare assurances that the events were useful?”

He writes that while he agreed with James and Lenz that it’s important to develop relationships and compare best practices with other parliamentary officials, the two seemed to be meeting with the same people about the same topics in different locations around the world.

For example, a December 2017 trip to Scotland was arranged to meet with an expert in “business continuity” at the Scottish Parliament, but that same official was in B.C. and attended the Washington trip four months earlier, Plecas writes.

James’s response says that the Speaker approved the itineraries for several overseas trips, including two trips to London, and never flagged any issues with expenses.

In his report, Plecas explains why he signed off on some of the expenses.

“That is because I trusted Mr. James when he told me that something had been long in the works, had already been approved, was an inconsequential administrative matter, or was something he and all employees were entitled to,” he writes. “Senior executives depend on forthright advice from senior managers about matters put forward for approval — it is not a game of ‘catch me if you can.’ ”

James is also accused of loading his pickup truck with $10,000 worth of alcohol and driving it to the Penticton home of former Speaker Bill Barisoff. In his rebuttal, James says he took some alcohol, along with a desk and chair, to Barisoff’s home but “categorically” denies that the liquor was worth $10,000. James says Barisoff wrote a cheque to the legislative assembly for the alcohol.

Plecas says that amount does not match up with employees’ accounts that two truckloads worth of alcohol, including beer, boxes of wine and hard liquor, were loaded into the truck. James took two work days to make the trip to Penticton and expensed taxpayers for a hotel and travel expenses, which far exceeded the $370 cheque, Plecas says.

James’s lawyer, Mark Andrews, who was also authorized to speak on behalf of Lenz, appeared Thursday before the all-party legislative assembly management committee. Andrews argued that Lenz and James should have the opportunity to review the Speaker’s followup report before it was released publicly.

That was rejected by the committee.

Opinion: Of wood-splitters and other hard questions
Jan 24, 2019 12:05 PM
Comments
We welcome your feedback and encourage you to share your thoughts. We ask that you be respectful of others and their points of view, refrain from personal attacks and stay on topic. To learn about our commenting policies and how we moderate, please read our Community Guidelines.