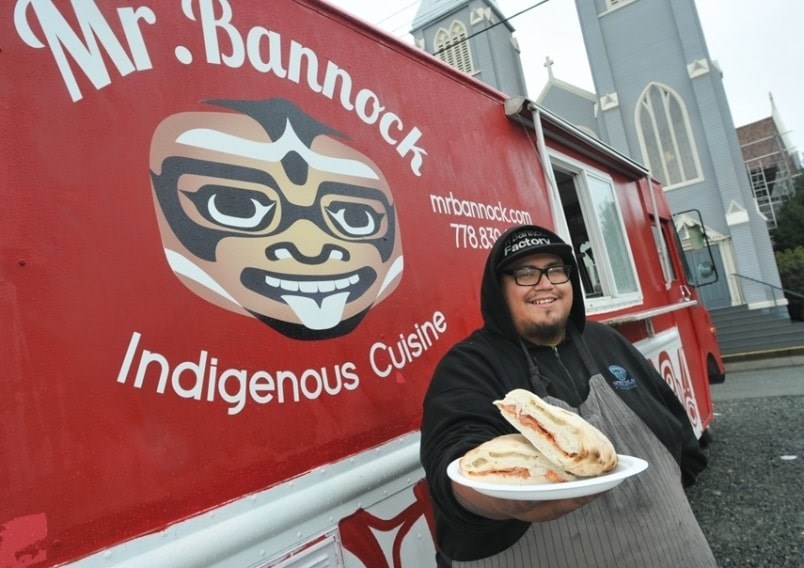 In the year since Paul Natrall — the man behind the wheel and the stove — started his food truck, he’s made quite the name for himself as “Mr. Bannock.”

A member of the Squamish Nation, Natrall features Indigenous classics, but also his own take on Indigenous fusion. Since 2018, Mr. Bannock has been touted as Vancouver’s first Indigenous food truck.

The big goal is just to showcase Indigenous food culture,” he said.

In September, Mr. Bannock was announced as the BC Indigenous Business Award’s Young Entrepreneur of the Year. Natrall will be one of 15 people to be honoured at a gala dinner on Oct. 17.

When asked if he thought he’d win an award, especially so soon after launching, Natrall chuckled and said, “No. Not at all.”

Those who have eaten his cuisine would not be so surprised. Natrall, who trained in traditional French cooking with Vancouver Community College, has always wanted to be a chef. His first teachers were his mother and grandmothers. One of his uncles was a hunter and would bring home venison, moose and elk that Natrall said the family would eat alongside everyday food.

His own twists on traditional Indigenous foods take shape in his popular bannock waffles. Using bannock dough, the different texture is paired with whipped cream and berries or smoked chicken with apple and cranberry coleslaw. He likes being creative with his knowledge of a variety of cuisines.

“Growing up and learning about food, I would see Italian cuisine and French cuisine, Mexican stuff everywhere, but there was never a place for Indigenous,” he said. “There’s a huge missing link for an Indigenous food culture.”

Food, he said, can help with reconciliation and past trauma from when Indigenous practices and gatherings were not allowed.

“The BC Indigenous Business Award recognizes enterprises that create and expand opportunities, relationships and communities, all with the goal of a more prosperous future,” foundation chair, Anne Giardini, said in a press release. “BC Achievement is particularly excited to highlight some of the many Indigenous businesses across British Columbia that foster innovation – integrating the practices of the past with the economies of the future.”

“I’m very excited and thankful that I was even nominated for something like that, let alone being awarded it,” Natrall said.

In Squamish, Natrall and his food truck have appeared at several weekends of the Squamish Farmers’ Market. Each time, as the guest chef, he shops the local goods in the market, then creates a farm-to-table (or, in this case, to truck) sampling from scratch.

“The whole idea is to get everybody aware of what’s local,” he said.