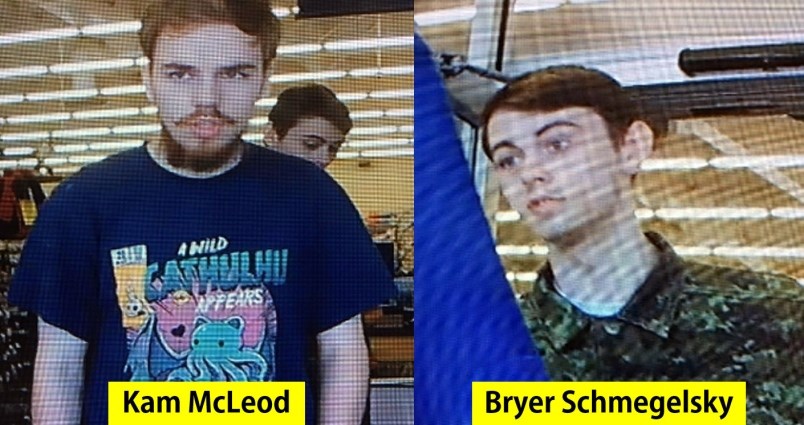 Kam McLeod, 19, and Bryer Schmegelsky, are suspects in the murders of Lucas Fowler and Chynna Deese on the Alaska Highway and the death of a man on Highway 37 near Dease Lake. Anyone with information on their whereabouts is urged to call 911 immediately and to not approach the pair, who are considered dangerous. (via B.C. RCMP)

Editor's note: This story has been updated. Click here for the latest information.

unties were on an all-night patrol in an area of northern Manitoba on Tuesday as the search intensifies for two suspects wanted in connection to three deaths on Northern B.C. highways.

Kam McLeod and Bryer Schmegelsky were last seen in Gillam, Manitoba, RCMP have confirmed. A burned-out vehicle was found on the nearby Bird reserve, according to Fox Lake Cree First Nation Chief Walter Spence. He could not immediately confirm whether it’s connected to the wanted teens, though photos starting to be shared across social media show a grey SUV matching the description the pair was last seen driving.

“An all-night patrol for the community has been prepared as a caution,” Spence said in a statement Tuesday evening (July 23).

“The RCMP are carefully conducting their work with a large presence and I would like to ask all community members to report anything of concern directly to RCMP.”

This vehicle was reportedly found nearby Gillam, Man. (via Submitted)

Gillam is roughly 730 kilometres northeast of Winnipeg, as the crow flies, with only one highway in and out of the community. After Gillam, the highway continues north through Fox Lake and to the abandoned town of Sundance, a former Manitoba Hydro camp.

McLeod, 19, and Schmegelsky, 18, are suspects in the killings of Australian Lucas Fowler, his American girlfriend Chynna Deese on the Alaska Highway on July 15. They are also suspects in the death of an unidentified man found a few kilometres from the teens' burned-out pickup truck on Highway 37 near Dease Lake on July 19.

They were seen in Meadow Lake, Saskatchewan, on July 21, driving a grey 2011 Toyota RAV 4 before moving east to Manitoba.

"Our investigators are sharing information with investigators in Manitoba but confirms our belief that they were continuing to travel and the renewed importance of not focussing on one particular area but instead our efforts to locate them.”

The two were also reportedly seen at a gas station in Split Lake, Manitoba, about a two-hour drive west of Gillam.

"The guy who paid for the gas — he was quiet, he didn't say anything, he was just looking down. They seemed like, I don't know, normal," Mychelle Keeper told CBC News. "I'm just so nervous right now thinking about it."

Kam McLeod and Bryer Schmegelsky were last seen driving a grey 2011 Toyota RAV 4. They may be driving a different vehicle and may have changed their appearances, police say. (via BC RCMP)

Shoihet said Manitoba RCMP issued a social media post to ensure that Manitobans were aware and could take proper precautions.

Both McLeod and Schmegelsky both stand 6-foot-4 inches tall and weigh around 169 pounds. Police said earlier Tuesday they may now be driving a different vehicle and may have changed their appearances and clothing.

On Monday, police said the teenagers were missing, but after making a public appeal for help in finding them, investigators received new information that led them to believe the two are suspects in all three killings, said Shoihet.

Anyone with information on their whereabouts is urged to call 9-1-1 immediately. Police are warning the public to not approach the pair, who are considered dangerous.

McLeod and Schmegelsky, best friends since elementary school, had left Port Alberni on Vancouver Island for Whitehorse on July 12 to find work, according to family.

Bryer Schmegelsky’s father said he can’t square the allegations against his son with the “good kid” he knows. “I don’t know what to think anymore,” said Alan Schmegelsky. “I’m in disbelief. I didn’t see any signs of violence.”

He said he found out his son was a suspect in the homicides via a text from a reporter in Ontario while at work as a carpenter. Schmegelsky said he was trying to keep busy and distract himself from his son’s disappearance when he heard the news.

Although his son was interested in airsoft guns — an imitation firearm that shoots small pellets at much slower speeds than real guns — Schmegelsky believes his son had never shot a real gun.

He said Bryer would go into the woods with friends to play strategy games and simulate combat. Schmegelsky bought him a camouflage outfit for the game. He was glad his son was getting outside and spending time with friends.

“His buddies all had them and that was their outdoor video game. You know, a real-life video game,” he said.

The investigation in northern B.C. began on July 15 after the bodies of 24-year-old Chynna Deese of Charlotte, North Carolina and 23-year-old Lucas Fowler of Sydney, Australia, were discovered by a road worker on the side of the Alaska Highway, about 20 kilometres south of Liard Hot Springs.

RCMP said the two had been shot and killed on July 14 or 15. The couple, who met in Croatia two years ago, had been travelling through B.C. in a van that belonged to Fowler.

Speaking at an RCMP press conference in Surrey on Monday, Lucas’s father, Stephen Fowler, called the couple “a great pair.”

Four days after Fowler and Deese’s bodies were found, and 470 kilometres away, Dease Lake RCMP discovered a burning truck and camper belonging to McLeod and Bryer Schmegelsky, and the body of an unidentified man two kilometres away.

Shoihet said she could not disclose how the unidentified man found near the burned-out truck died. Police have released a composite drawing of the heavy-set, middle-aged man with a beard and are hoping he will be recognized.

Claudia Bunce, owner of the Cassiar Mountain Jade Store in the northern B.C. community of Jade City, said the pair stopped at the store last Thursday, the day before their burned-out truck and the body of the unidentified man was found about 115 kilometres away.

The staff member who saw the two was too shaken to speak to a reporter, but Bunce said they arrived in the truck and visited the store for free coffee. She said they were on their own and she doesn’t believe they had a conversation with the employee.

“I don’t think they stood out any more than any other teenage boys who were just on the road,” she said.

She said the situation is very frightening for everyone who lives in the remote area.

“As you can imagine, the community is very upset about this,” Bunce said. “It’s very rural — beyond rural. We’re on a highway with no cell service. Most of us don’t have power. So it’s unnerving.”

RCMP were at the store on Tuesday gathering hours of surveillance video and interviewing staff members. Bunce said she didn’t know exactly what time last Thursday the young men were in the store.

The RCMP has been in contact with both teens’ families to ask for help finding them, Shoihet said.

Someone who answered the phone at the McLeod family home on Tuesday said they were not ready to speak publicly.

Alan Schmegelsky said he had a good relationship with his son in the last two years, after not seeing him for many years following a separation from Bryer’s mother. He said he was in contact with his son nearly every day.

Schmegelsky has been trying to contact him since discovering he was missing, but the messages have not been delivered.

Schmegelsky said he travelled to Port Alberni every other weekend to visit his son.

He had already reached Nanaimo on the afternoon of Friday, July 12, when he saw a text from his son that said the two friends were heading to Alberta. He said the message was sent about 8:40 a.m. that day.

Alan Schmegelsky said it was his son’s first job and he had just gotten his second paycheque. He spent his first cheque on a new suit.

Alan Schmegelsky said he has no idea where the teenagers might be heading. Bryer doesn’t have a driver’s licence, his father said.

“I’m worried to death about my kid. He’s not even a man,” Alan Schmegelsky said. “This is not the kid I know.”

International couple killed in double homicide in northeastern B.C.: RCMP
Jul 19, 2019 10:30 AM
Comments
We welcome your feedback and encourage you to share your thoughts on this story. We ask that you be respectful of others and their points of view, refrain from personal attacks and stay on topic. To learn about our commenting policies and how we moderate, please read our Community Guidelines.