Marine heatwave could mean a warmer-than-usual start to winter 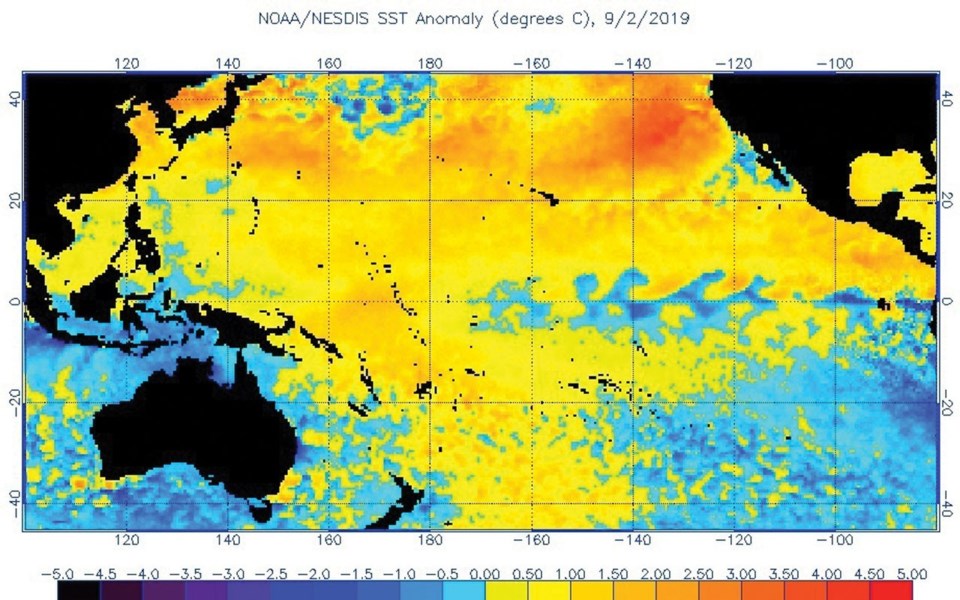 A marine heatwave off the coast of B.C. has meteorologists warning of the possibility of a warmer-than-usual fall and start to the winter this year.

Researchers are monitoring an expanse of water building off the West Coast that stretches roughly from Alaska to California. According to the NOAA Fisheries' Southwest Fisheries Science Center in La Jolla, California, it is the second-largest marine heatwave the northern Pacific Ocean has experienced in the last 40 years.

The largest was a gathering of warm water, nicknamed "the Blob," that disrupted the West Coast marine ecosystem in 2014-15 and depressed salmon returns and wreaked havoc on the ski season.

"It's on a trajectory to be as strong as the prior event," says Andrew Leising, a research scientist at the California centre, in a statement. "Already, on its own, it is one of the most significant events that we've seen."

Emerging in the last few months and primarily affecting the upper layers of the ocean, the marine heatwave may not have the same impacts as "the Blob," however, and could dissipate before the winter.

Dr. Richard Dewey, associate director for science with Ocean Networks Canada, says the heatwave is being monitored closely, but it's still too early to call it "the Blob 2.0."

"This is quite different from what we saw in 2014 when it was warm about six months from now," he says. "If we look at the underwater temperature, we see it is two or three degrees warmer than usual, but at this time of year, that heat is relatively near the surface.

"My words of caution are that it is early days. Yes, there seem to be warm conditions out there reminiscent of 2014 when we had the Blob, but we will really have to see what happens in the fall when the Aleutian Low starts to kick back in."

One of the largest atmospheric circulation patterns in the Northern Hemisphere, the Aleutian Low is a low-pressure system located near the Aleutian Islands in the Bering Sea that can generate strong winter storms in Alaska and Canada.

"The fall is going to be pretty critical as far as what the weather pattern is set up to be. If the Aleutian Low builds back up and we get the fall storms that always sort of hit in October, November then this story may fade away and we'll be back to normal conditions. That would be, I think, good for everyone," Dewey explains.

But if the present conditions continue, we could be in for a warmer start to the ski season.

"The No. 1 takeaway is that the rest of fall and the beginning of winter is more likely to be on the warmer-than-average side because of the way it's setting up," says Doug Lundquist, a meteorologist with Environment Canada. "There is random variability to it, even in temperature, but I think it means we're likely going to be warmer for the next while."

The heatwave's effect on snowfall — always a hot topic in Whistler — is difficult to predict at this stage, Lundquist notes.

"I think it's a bit too early to say because, in fact, the warmer water could perhaps make the air able to hold more moisture," he says. "Beyond a week or two, precipitation is very difficult (to predict). It's more an issue for the North Shore Mountains where the freezing level matters more than Whistler, anyway, where it's (670) metres above sea level."

It's worth noting, however, that the Blob of five years ago "was not good for snowpack" in B.C., Dewey says.

Average fall, cold winter ahead, The Weather Network predicts
Sep 16, 2019 9:05 AM
Comments
We welcome your feedback and encourage you to share your thoughts. We ask that you be respectful of others and their points of view, refrain from personal attacks and stay on topic. To learn about our commenting policies and how we moderate, please read our Community Guidelines.