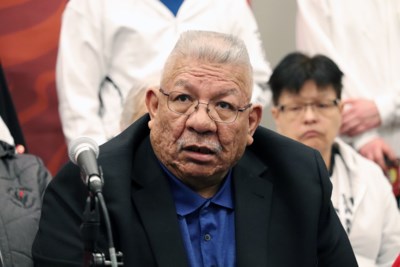 For the first time in 15 years, the Lheidli T’enneh First Nation has elected a new chief.

At just 36 years old, Clayton Pountney (but you can call him Clay) won by a margin of 15 votes by the end of Wednesday night’s election (April 10), defeating the long-running leadership of Dominic Frederick, who was first elected in 2004.

“I wish to thank former Chief Dominic Frederick, Domo as we call him,” said Chief Pountney this morning (April 11) at the Lheidli T’enneh office in Shelley. “He’s helped re-establish our presence in downtown Prince George where the community has economic development. This included our House of Ancestors and our development office as well. We had a lot of initiatives during Domo’s time and we wish him well in all his successes moving forward.”

Chief Pountney served as a councillor with the Lheidli T’enneh in his previous term; Dominic Frederick served seven consecutive two-year terms as Chief.

Pountney is excited to begin his position and foresees a lot of provincial government relations, especially with maintaining surrounding territory.

“Our premier [John Horgan] is committed to enshrining and legislating the United Nations Declaration on the Rights of Indigenous Peoples (UNDRIP),” he explained. “This will mean a change on how business is done on how our unceded traditional lands. We want to work in partnership with industry for the benefit of our community, but we will do so with greater vigilance on environmental stewardship and increased benefits to our community.”

Chief Pountney’s campaign ran on a basis of creating real change, including regrouping the emotional status of the Lheidli T’enneh First Nation.

“Transparency and communication is the focus,” he said. “We had a treaty earlier last year involving ratification that didn’t go through, but it tore apart our community. So now we have to come back together and work together as a community to move everything forward again.”

He claims working with governments at all levels will open doors for the Lheidli T’enneh to remain open and forward to new ideas, bringing back stable leadership in order to keep his community intact.

“We need to see how we identify ourselves and seeing what we need to move the community forward. So, it’s going to be a lot of open transparency amongst leadership in the city and in the district.”

Finally, the passion of the Lheidli T’enneh for its land and its people is something Chief Pountney is proud to say is everywhere within Prince George.

He added he’s heard from displaced members, that have since returned to northern B.C., they’ve seen a positive change in culture and recognition.

“They say, ‘Lheidli T’enneh stuff is everywhere.’ It makes them very very proud and we’d like to keep that going. And again, that means working with local governments and just keep those relationships building and their own board will be free to work with us.”

He and council plan on meeting next week to discuss initiatives and plans for the Band for the next two years, but not before they go down to Vancouver this weekend to support local members participating in the Sun Run on Sunday (April 14).

This election also comes a month-and-a-half after the Lheidli T'enneh announced its lawsuit against Enbridge for the pipeline explosion in October last year.

There were no comments made on the status of the lawsuit by the new Chief and Council at this time.

The final counts for the 2019 election are as follows:

B.C. Parks seeking input on management of the Ancient Forest east of Prince George
Feb 28, 2019 3:33 PM
Comments
We welcome your feedback and encourage you to share your thoughts. We ask that you be respectful of others and their points of view, refrain from personal attacks and stay on topic. To learn about our commenting policies and how we moderate, please read our Community Guidelines.