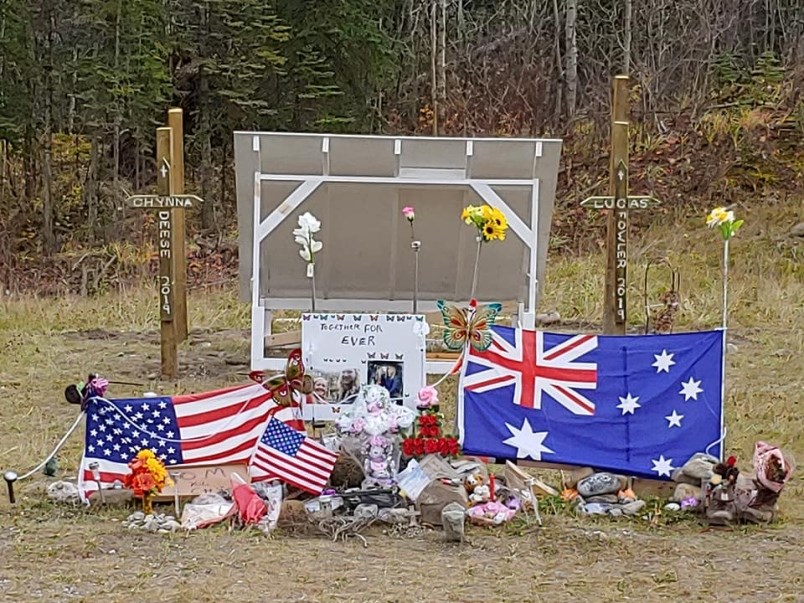 A memorial in memory of Lucas Fowler and Chynna Deese on the Alaska Highway. (via John Van Vyfeyken/Facebook)

A memorial for two young international tourists murdered on the Alaska Highway this summer is getting an upgrade.

Over the past few weeks, Grennan and fellow trucker John Van Vyfeyken have been working on a more permanent memorial with new crosses and a small shelter to keep it covered from the elements.

“The memorial is a place to keep the memory of this couple alive and to help all those impacted by this tragic event find some solice [sic] and peace knowing that we are all keeping the lost and thier [sic] families in our thoughts and prayers,” Van Vyfeyken wrote in a post to Facebook.

Fowler and Deese were found shot to death outside their van on the side of the highway on July 15. Their killers, Kam McLeod and Bryer Schmegelsky were found dead in the northern Manitoba bush on Aug. 7, after a weeks-long nationwide manhunt that involved the police and military.

The memorial, featuring an American and Australian flag, has been collecting flowers and other tributes since it was first made.

Fowler, 23, was from Sydney, Australia, and Deese, 24, was from Charlotte, North Carolina. The couple met in a hostel in Croatia in 2017, and had visited Europe, Central America, and Asia together.

Fowler had worked and saved up money in Sydney before travelling to B.C. earlier this year to work at a ranch in Hudson's Hope, and to later meet up with Deese. They had just started a road trip together up the Alaska Highway and to the Yukon before they were killed.

"These families are so far away, I couldn't tell how much they appreciate us doing this," Grennan said in a video captured by a passerby documenting their work.

Click here to watch a short video of the two men working on the memorial.