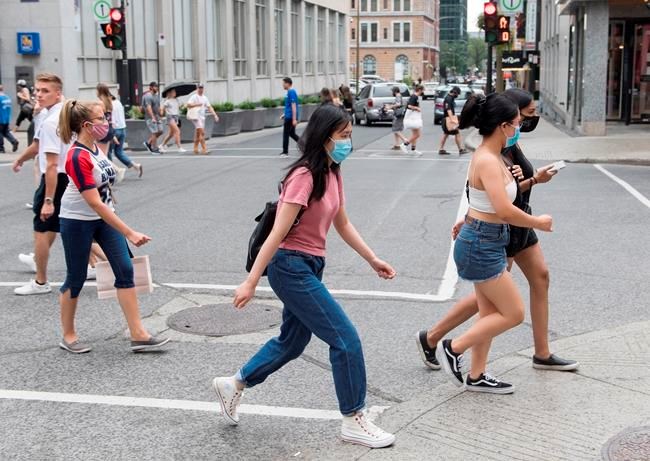 Government and public health officials need to empower people in their 20s to reduce the risk of contracting COVID-19, instead of blaming and shaming them for disproportionately representing new infections across the country, say experts.

A science communicator and a university professor both say public health messages targeting young people need to acknowledge that they may be engaging in more risky behaviour, while giving clearer directions on how they can better practise social distancing.

"I have my family. I have my husband, my kids. I have a job to occupy myself with. And the drive to go out and be social is inherently in all of us," said Kim Hellemans, chair of neuroscience at Carleton University in Ottawa.

"But among youth and students, in particular, they define themselves through their socialization.

"The pandemic and having to socialize in smaller bubbles is really pushing against that biological, sociological urge to be with their peers."

As young adults struggle with high mental-health rates due to stressors such as peer pressure, Hellemans said addressing their need to socialize to reduce depression can be an effective approach in changing their social habits during the pandemic.

"Messages public health put out that target them should acknowledge, 'Hey, we know that this is really hard and you really want to be out on the patio, to be out like socializing with people. But how can you do this in the most safe way?'

According to the federal government's weekly epidemiology update, the number of new cases nationally increased by 26 per cent during the week of Aug. 30 to Sept. 5.

Samantha Yammine, a neuroscientist and science communicator in Toronto, agreed young adults need to practise better social distancing but government messages do little to target them, and minimize the greater struggles they also have.

After collecting anecdotal evidence from hundreds of people in their 20s through an informal online survey she conducted on Instagram, Yammine said she found that a lot are struggling as they go back to post-secondary schools, both as students and as teachers.

"A lot of people are moving into new houses with new roommates. And so the shared housing thing is another big issue that we don't really talk about."

Yammine said leaders can give clearer instructions, for example, on how young people sharing homes together can maintain a bubble. She said many people told her they have big families with different socializing priorities, which makes it hard to keep their bubbles small.

One person who wrote Yammine said "living with roommates and having to navigate different covid boundaries and expectations" was a challenge.

"Similarly, there are people who live alone, and then they don't know who they can see because a lot of their friends are socializing broadly," Yammine added.

"Messaging matters. And again, in a harm-reduction model, we're always trying to reduce harm as much as possible."

Manitoba makes masks mandatory for Winnipeg as COVID-19 cases surge
Sep 26, 2020 5:30 PM
Comments
We welcome your feedback and encourage you to share your thoughts. We ask that you be respectful of others and their points of view, refrain from personal attacks and stay on topic. To learn about our commenting policies and how we moderate, please read our Community Guidelines.