Most of the equipment stolen from Prince George man found 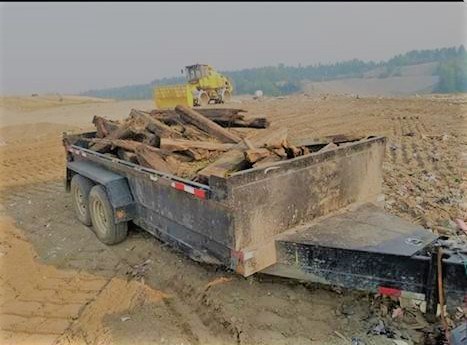 The excavator and trailer that went missing from a Prince George man has been recovered. (via Facebook/Will MacFarlane)

A Prince George man is breathing a sigh of relief after learning some of the equipment stolen off his property in the Hart last week has been recovered.

On Sept. 13, Will MacFarlane's excavator, hydraulic trailer and the pickup truck went missing. He and business partner Dave Hillier use the equipment to deliver donations to wildfire evacuees and firefighters (among other things).

The pair didn't find the equipment themselves through their regular morning searches. Rather, they were notified by many on social media that the equipment had been found.

"I guess a guy watched somebody drop it off and then peel out of there," McFarlane tells PrinceGeorgeMatters. "So that's why the police were notified and we were notified."

Still missing are the pickup truck and the company tools.

Once they saw the equipment, MacFarlane and Hillier could tell the excavator had been moved off the trailer.

"You could tell the excavator was unloaded at one point and loaded back in because the dummies don't know how to load an excavator," he says. "It was chained backwards with upside down chains and they were in the wrong spot. It was dangerous looking."

He has no doubt the culprits dumped the trailer and excavator in response to the heat received on social media surrounding the theft.

"It's mainly because of Prince George, B.C. and Alberta and everybody stepping in to share that post and get our name out there," he says. "I can't express how many messages I got over Facebook from people saying, 'Hey, we're from this area or we're from Alberta,' It went as far as Manitoba and Saskatchewan."

There was no visible damage to the trailer and excavator when MacFarlane and Hillier first looked. The excavator will undergo a full service to ensure everything still runs properly and the trailer will also be tested for safety.

Once that all wraps up, the pair will continue their trips to bring donations to evacuees and firefighters.

MacFarlane adds that anybody who provides information that leads to recovery of the truck and tools will receive a $2,000 reward.

Overdose deaths increase by 93 per cent among B.C.'s First Nations
Jul 6, 2020 4:05 PM
Comments
We welcome your feedback and encourage you to share your thoughts. We ask that you be respectful of others and their points of view, refrain from personal attacks and stay on topic. To learn about our commenting policies and how we moderate, please read our Community Guidelines.