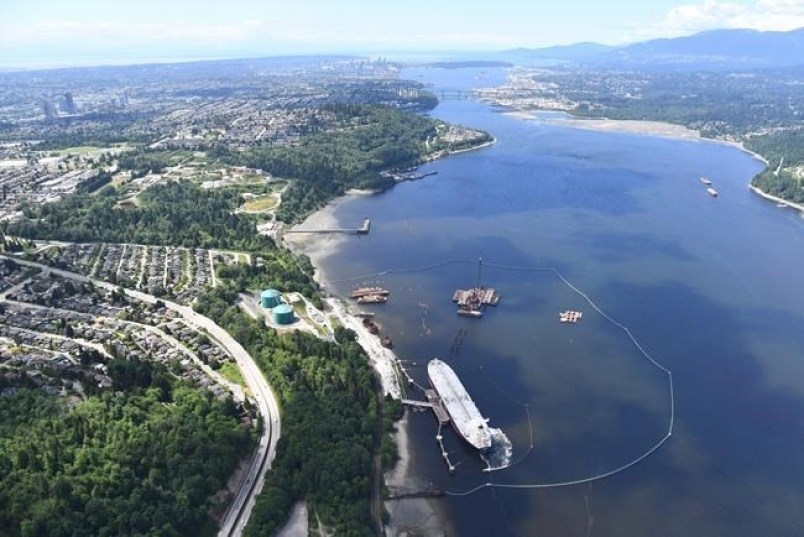 A aerial view of Kinder Morgan's Trans Mountain marine terminal, in Burnaby, B.C., is shown on May 29, 2018. (via Jonathan Hayward/The Canadian Press)

The NEB is once again recommending that the federal government approve the expansion, but with additional measures to mitigate impacts on killer whales, birds and the marine environment in general. They include enhanced noise mitigation measures, additional measures related to oil spill response, and reductions of greenhouse gases from marine vessels.

It also recommends the federal government expedite the creation of a Strait of Georgia national marine conservation area. Some of the recommendations include "offsets" that would reduce the risk of increased noise and vessel strikes by placing restrictions on other forms of marine traffic, such as vessel speed reductions, in certain defined areas.

While an oil spill would not be likely, the impacts would be "significant," the NEB acknowledged, but said the benefits of the project justified the risks.

Robert Steedman, the NEB's chief environmental officer, noted the impacts on marine animals from existing marine traffic in the Salish Sea "are already significant without the project."

The sale of the Trans Mountain pipeline and expansion project to the Canadian government for $4.5 billion had no sooner been approved by Kinder Morgan Canada in August last year when the Federal Court of Appeal brought its $7.4-billion expansion to a halt.

The court quashed an order in council that had approved the twinning project, ruling that the NEB had failed to consider the impacts of increased oil tanker traffic on killer whales, and that federal officials failed to properly consult First Nations.

The NEB was ordered to reconsider the marine impacts issue through a new set of hearings, within a tight timeframe and narrow focus. On Friday, Feb. 22, the NEB issued its report.

'Are you uncomfortable yet?': Prince George woman shares experiences of being black
Jun 3, 2020 4:35 PM
Comments
We welcome your feedback and encourage you to share your thoughts. We ask that you be respectful of others and their points of view, refrain from personal attacks and stay on topic. To learn about our commenting policies and how we moderate, please read our Community Guidelines.