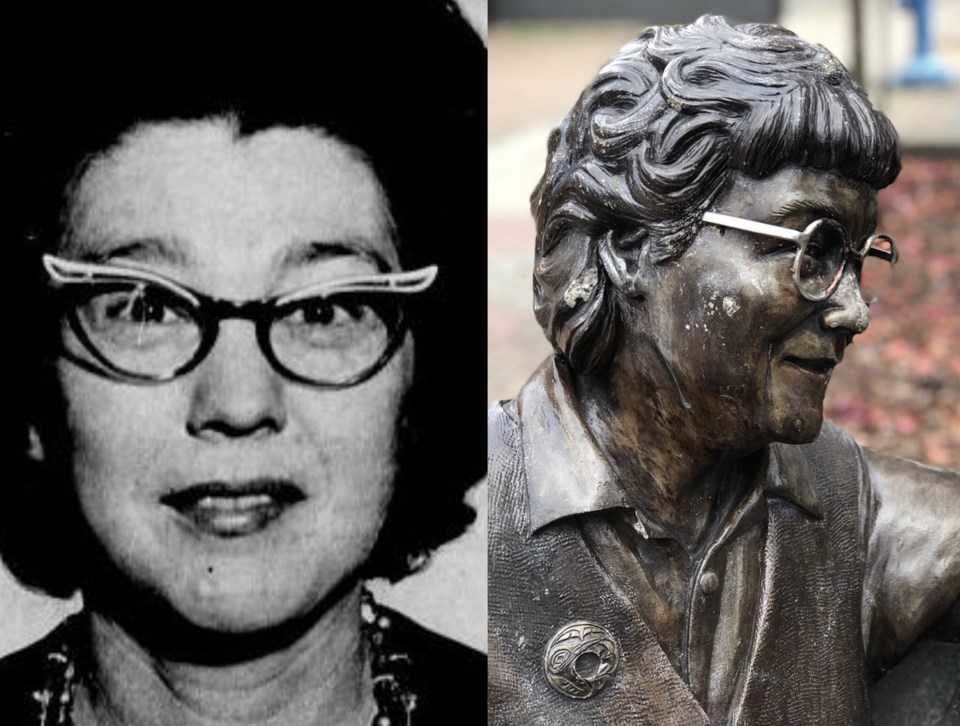 Bridget Moran in the 1960s and her statue on Third Avenue and Quebec Street. (via STORYHIVE/Hanna Petersen)

Many people in Prince George are familiar with the statue that sits on the corner of Third Avenue and Quebec Street.

That’s Bridget Moran, of course: a social worker, author, and tireless advocate who spoke out against the government’s neglect in addressing the problems of the province’s most vulnerable.

A new documentary called Blacklisted: The Bridget Moran Story produced by STORYHIVE tells Bridget’s lifelong journey to stand up for truth, and how she used her words as a catalyst for change.

“It doesn’t matter from what community or what background you come from, one voice can mobilize change and someone like Bridget is an example of how you can do that,” says the film's director Gillian McKercher.

In 1964, Bridget wrote an open letter to Premier W.A.C. Bennett criticizing the welfare department with gross neglect and shed light on a system she felt did not respond to the needs of those it was designed to help.

Her actions got her fired, and even though she won restatement two years later, she was told there was no work for her in the B.C. Ministry of Social Services.

However, Bridget continued to work as a social worker and advocate for families in the north. After her retirement, she also became an author chronicling her stand against the government in her book A Little Rebellion.

“Homelessness, drug addiction, and mental health - those are things that Bridget was aware of and was advocating for their improvement in the sixties and now we are almost in the 2020s and those things are still major obstacles in many people’s lives,” says McKercher, “I think we need to continue to be vigilant in the way that Bridget was.”

To tell the full story of Bridget’s life and work, McKercher drew from Bridget’s books, interviewed those who knew her, and worked with the University of Northern British Columbia (UNBC) where a large number of archival materials are kept.

“The documentary really talks about Bridget really standing up for something that she believed in and taking on the powers that be on an issue that really mattered to her and something that needed to be fixed,” says Bridget’s daughter Roseanne Moran, who collaborated with McKercher on the project.

“I think those issue will always be with us and I think it’s really important to let people see the story of someone who was willing to take a chance and step out and step up and do what they believed in.”

Moran noted that her mother’s greatest legacy is her writing.

“They really stand the test of time,” says Moran of her mother’s books, which brought to light many issues facing First Nations and northern communities. Her books are continually taught in schools, colleges, and universities.

Notably, Bridget wrote the biography Stoney Creek Woman after meeting Elder Mary John and conducting many interviews with her about her life on Stoney Creek Reserve.

She also wrote about the investigation of the death of a young carrier woman named Coreen Thomas who was killed in a hit-and-run when she was nine months pregnant in her follow-up book Judgement at Stoney Creek.

“On the statue of her downtown there is a little blurb for people to read, but obviously this documentary just adds a whole kind of context to why that statue is there,” says Moran.

“She was active there, she lived most of her life there and she loved Prince George and the north. I think it puts more of a story behind the statue that I know many, many people go and sit beside and decorate for festive occasions.”

The documentary is available to watch now on STORYHIVE’s YouTube Channel.