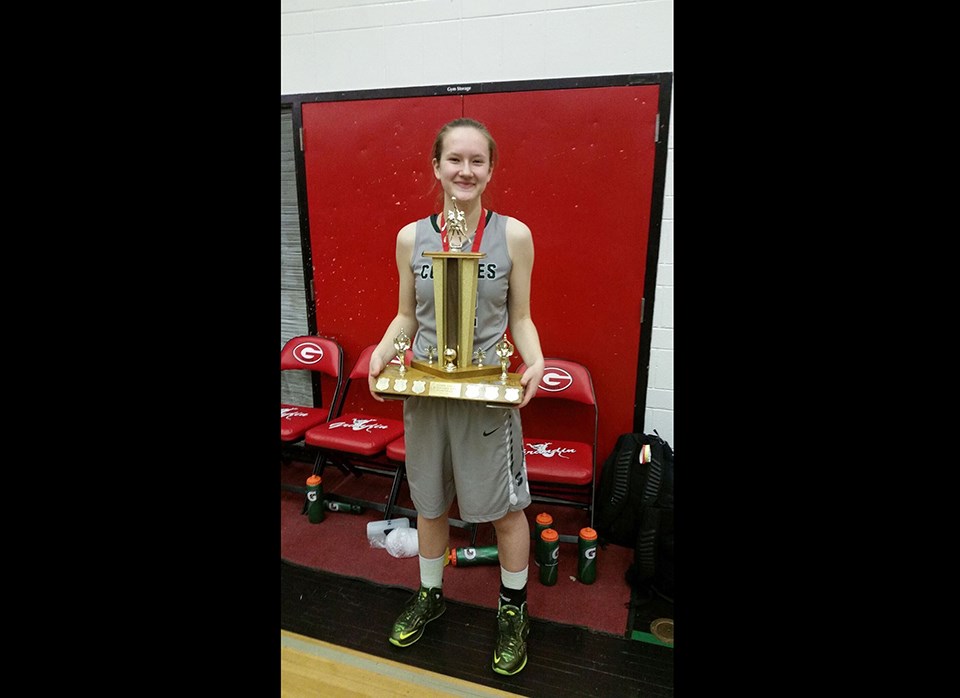 Maggie Mowser, seen here with the 2019 Calgary City Championship trophy, is joining the UNBC women's basketball team for the 2020-21 season. (via Submitted)

She’s a city championship under her belt, stands at six feet tall and is a threat on both sides of the court.

That’s what UNBC describes it’s latest recruit for women’s basketball as Forward Maggie Mowser has signed the dotted line to play in Prince George for the (shortened) 2020-21 season.

The 17-year-old graduated Centennial High School in Calgary this summer, which also makes her the second Coyote to commit to the Timberwolves nearly two months after David Tiessen switched packs to the men’s basketball squad.

“It’s really exciting,” said Mowser in a UNBC Athletics release on advancing to the highest level of university sport in Canada.

“I have put in a lot of hard work, so it is really rewarding for me to get to see that pay off. I am ready to get started. For me to get here, I have had to work very hard. I have put in a lot of hours in the gym, training outside of team practices, trying to develop my fundamental skills. Also, strength training, to prepare myself for the physicality of post-secondary.”

She won the Calgary City Junior Girls Championship in 2018 and captured a silver medal in the senior girls' final with Centennial back in March.

Mowser also trained with Genesis Basketball, an Alberta-based development program that takes players to tournaments across North America and compete against some of the best young athletes in the game.

“I am a really versatile player,” she said when asked how she can apply her skillset to UNBC’s regiment next year.

“I can score inside and finish in the post in all sorts of ways. I can drive and shoot, but I am also a team player. I am good at finding what the best play is for the team, rather than just the best play for myself.”

The success of the Lady T-Wolves has included four consecutive playoff appearances, the program’s first-ever postseason victory in 2019 and players like Maria Mongomo and Vasiliki Louka moving up to the professional rankings.

UNBC Head Coach Sergey Shchepotkin believes Mowser, his third off-season commit for 2020-21, has the ability to bring passion and dedication for the game that could fill some big shoes.

“She obviously has great size, but she has shown she has the ability to play under the basket or step outside and stretch defenses. We believe if Maggie continues to work, she is someone who projects as a player who will help us on offense, defense, and on the boards. I am happy she chose UNBC.”

In the classroom, Mowser is set to study biochemistry and molecular biology and will join her teammates in the Fall for training.

Canada West cancelled first-term play for basketball on June 8 due to COVID-19 restrictions and public health recommendations, with games to be played after Jan. 1, 2021.

A decision is expected to be made on Oct. 8.