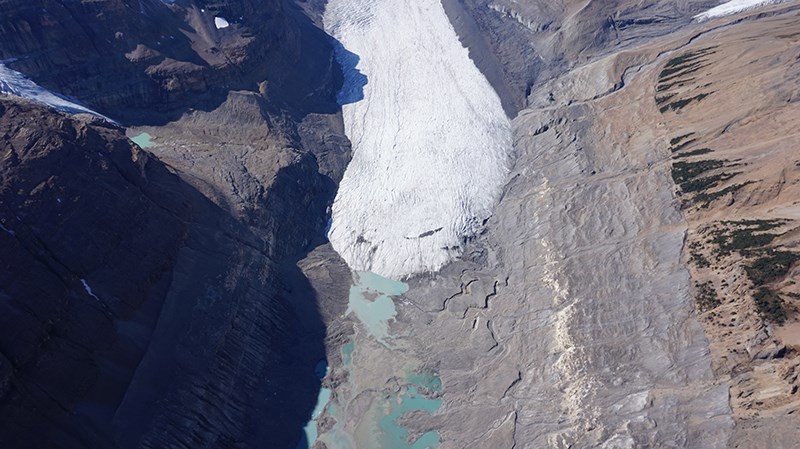 Evidence of recent glacier retreat can be seen in this aerial photo of the terminus of the Saskatchewan Glacier, in Jasper National Park, Canadian Rockies (via J. Shea).

North American glaciers are in significant decline, and have been losing mass over the past two decades.

That’s according to a new study led by UNBC, which is the first comprehensive assessment of glacier mass loss for all western regions of the continent, excluding Alaskan glaciers.

The research found that over the period from 2000 to 2018, glaciers in western North America lost 117 gigatonnes of water or about 120 cubic-kilometres, which is enough water to submerge an area the size of Toronto by 10 metres each year. 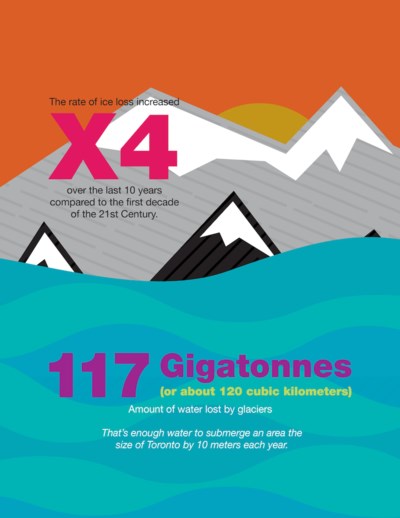 Infographic showing the glacier research data (via UNBC)
Compared to the first decade of the 21st Century, the rate of ice loss increased four times over the last 10 years.

“Our work provides a detailed picture of the current health of glaciers and ice outside of Alaska than what we've ever had before," said UNBC’s Dr. Brian Menounos, the lead author of the paper, in a news release.

"We determined that mass loss dramatically increased in the last 10 years in British Columbia's southern and central Coast mountains, due in part to the position of the jet stream being located south of the US-Canada border."

The jet stream is an area of fast-flowing upper winds that can steer weather systems over mountains and nourish glaciers with precipitation, mostly in the form of snow that builds up over time and later becomes ice.

This loss is significant because alpine glaciers are an important reservoir for rivers – providing cool, water during hot dry summers or during times of prolonged drought.

The research was published in Geophysical Research Letters and the team included scientists from UNBC, the University of Washington, NASA’s Jet Propulsion Laboratory, Ohio State University, and the Université de Toulouse in France.

The research team used archives of high-resolution satellite imagery to create over 15,000 digital elevation models covering glaciers from California to the Yukon.

These elevation models were then used to estimate total glacier mass change over the period of study.

"Frequent visitors to America's glacierized National Parks can attest to the ongoing glacier thinning and retreat in recent decades. We can now precisely measure that glacier loss, providing a better understanding of downstream impacts," said co-author Dr. David Shean of the University of Washington in the release.

"It's also fascinating to see how the glaciers responded to different amounts of precipitation from one decade to the next, on top of the long-term loss."

Coronavirus risk considered low for B.C., Seattle reports first case
Jan 22, 2020 9:19 AM
Comments
We welcome your feedback and encourage you to share your thoughts on this story. We ask that you be respectful of others and their points of view, refrain from personal attacks and stay on topic. To learn about our commenting policies and how we moderate, please read our Community Guidelines.