Changes from all levels of government are set to complicate operations for B.C. employers
0
Jan 16, 2019 1:05 PM By: Glacier Media 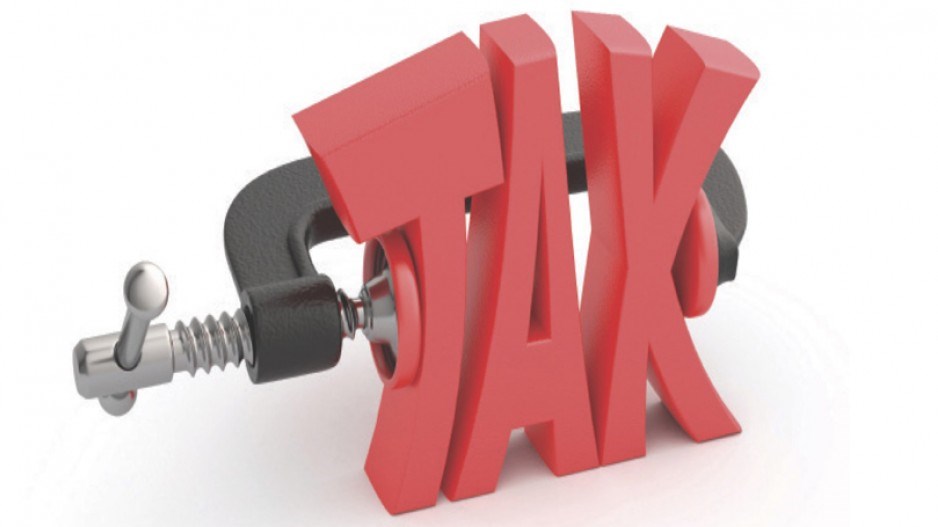 New governments bring new tax regimes, and for businesses and residents in B.C., that adds up to increased tax burdens and complexities in 2019.

“We’ve gone through an unprecedented series of changes over the last three years in our tax system,” said Phil Ross, tax partner with accounting firm Grant Thornton LLP. “I think there’s probably an appetite for a pause so that we can come to grips with the changes.”

That appears to be the sentiment shared by some accountants adjusting to the changes resulting from the defeat of long-standing governments, but not everyone agrees that the modifications are unprecedented.

Kevin Milligan, professor of economics at the University of British Columbia, refers back to the federal Conservative government’s introduction of the goods and services tax (GST) in 1991 and changes in the 1970s that overhauled Canada’s tax code.

CPP contributions and payments will increase over the next seven years to raise the amount retirees receive to 33 per cent of their average work earnings from the previous 25 per cent target.

In 2019, the CPP contribution rate will increase 0.15 percentage points to 5.1 per cent from 4.95 per cent of pensionable earnings, which means that in 2019 the average Canadian with a salary of $51,000 can expect to pay an additional $71.25 annually and his or her employer will match these contributions.

Canadian small businesses will benefit from a lower federal tax rate when filing their 2019 corporate tax returns later this year. The rate fell one percentage point to 9 per cent of taxable income resulting in a combined federal and B.C. tax rate of 12 per cent.

But Canadian-controlled private corporations (CCPCs) face new restrictions on income sprinkling. Previously an incorporated small business’ income could be split (sprinkled) among family members to reduce the family’s tax burden. But a CCPC must now compensate family members only for actual contributions to the business.

A higher tax rate on active income for CCPCs whose passive income exceeds $50,000 was also introduced in 2018. 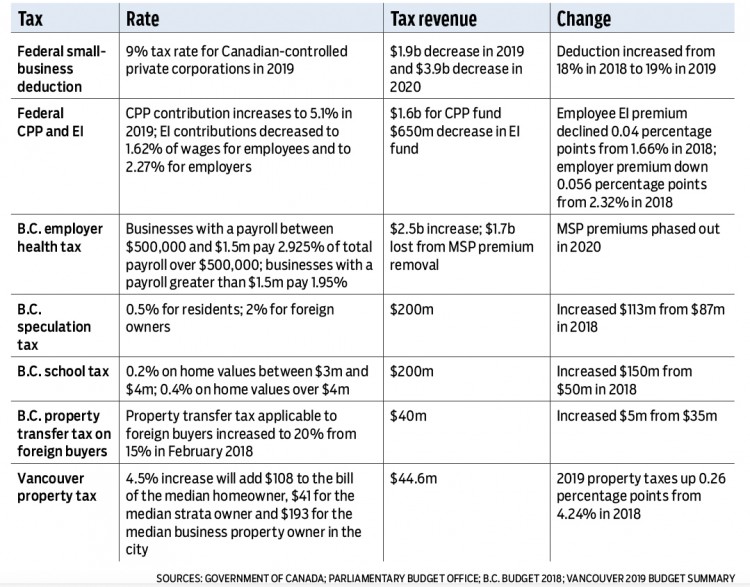 Milligan said the changes will help to refocus the small-business tax rate on improving incentives to invest in mom-and-pop businesses.

But Ottawa and the Canada Revenue Agency aren’t the only ones instituting major tax changes. The almost two-year-old B.C. NDP government has also made numerous revisions to the province’s tax system.

One of its most contentious changes will be how the province funds its medical services as it eliminates Medical Services Plan (MSP) premiums charged to individuals and switches to an employer payroll tax.

The new employer health tax was implemented on Jan. 1, 2019, but employee MSP premiums will not be phased out until Jan. 1, 2020. Higher employer MSP costs will likely be passed on in some form to employees and consumers.

Milligan said that while the changes won’t have a long-term effect on employment, they could reduce employee bargaining leverage in future wage negotiations. He also pointed out that many big employers were already paying their employees’ MSP premiums so the change will have little impact on them.

The City of Vancouver’s new council has already voted to increase 2019 property taxes 4.5 per cent. The new employer health tax accounts for one-third (1.7 per cent) of the increase. B.C. is the last province to eliminate the medical services premium model.

Milligan downplayed concerns that higher employer taxes will discourage companies from hiring new staff. He said Canada’s employment taxes are relatively low when compared with other G7 countries. According to Milligan, the tax that will have the most negative impact on the province’s business competitiveness is the provincial sales tax.

Economists typically support consumption, or value-added, taxes such as the GST and the harmonized sales tax (HST), because the end-user (consumer), not businesses, pays the tax.

But the polarizing debates that sank B.C.’s HST in 2011 have left the province with a lack of political will to institute another value-added option.

Ross said the more obvious route for the provincial government would be to address the PST’s impact on business competitiveness rather than raise personal income tax rates.

Carbon tax could help competitiveness, experts say
Nov 28, 2018 6:35 PM
Comments
We welcome your feedback and encourage you to share your thoughts on this story. We ask that you be respectful of others and their points of view, refrain from personal attacks and stay on topic. To learn about our commenting policies and how we moderate, please read our Community Guidelines.