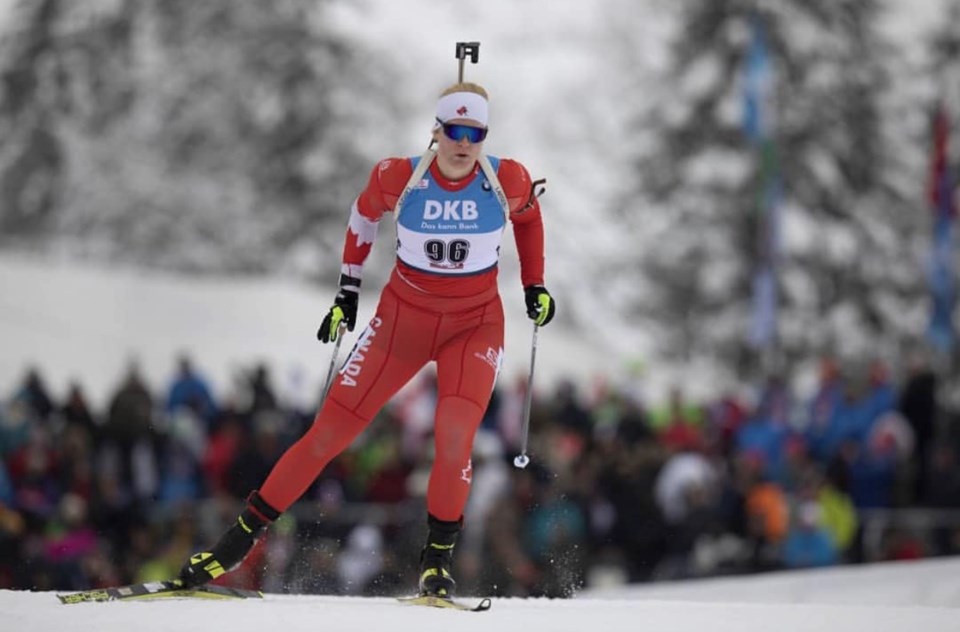 The next stop on the International Biathlon Union’s (IBU) 2019-20 World Cup circuit took Sarah Beaudry and Emily Dickson to Germany this past weekend.

The fourth installment of the nine-stage event saw the Prince George and Burns Lake biathletes take the Oberhof slopes and while it may not have been the finish they were looking for, they each contributed in significant ways.

For Beaudry, she was the lead in the Canadian women’s 4x6km relay race on Saturday (Jan. 11) and was once again sharp in the range, hitting 16 of 20 targets (80 per cent) and upping her World Cup average to 83 per cent overall.

However, the four targets she missed cost her lap time and ended up 2:19.8 behind first place on the opening round.

After the 25-year-old came Dickson, who finished in a faster lap time of 2:01.7, but struggling in the shooting portion by going 14 for 20.

Once the 22-year-old had completed her stint, Canada got lapped before third Nadia Moser could cross the finish line, resulting in a 20th-place final.

Two days earlier (Jan. 9), Dickson got the chance to compete in her first-ever IBU World Cup event and cracked the top 50 out of 100 competitors in the women’s 7.5km sprint.

She went 90 per cent in the range, nine of 10 targets, and crossed the finish line 2:58.6 behind Norway’s Marte Olsbu Roeiseland at the top of the podium.

“So happy to finally have my World Cup debut in the books,” said Dickson in a social media post.

“It was a solid performance [...] but I’m already looking forward to the next one. Knowing I’m capable of stronger performances has me stoked for the rest of the season and eager for the next opportunity!”

IBU’s World Cup circuit continues through Germany with the next set of races Wednesday (Jan. 13) through Sunday (Jan. 19) at Ruhpolding.

So happy to finally have my World Cup debut in the books! 💃🏼 It was a solid performance earning me a 46th place- but I’m already looking forward to the next one... knowing I’m capable of stronger performances has me stoked for the rest of the season and eager for the next opportunity!! Big thanks to all those who cheered me on either course-side or by yelling at your computer at home 😜 it was an exciting day and I’m glad I could share it with you!

Biathlon BC event in Prince George postponed due to incoming frigid temperatures
Jan 10, 2020 11:24 AM

Sharp shooter: Prince George’s Sarah Beaudry begins new Biathlon World Cup circuit
Dec 11, 2019 8:35 AM
Comments
We welcome your feedback and encourage you to share your thoughts on this story. We ask that you be respectful of others and their points of view, refrain from personal attacks and stay on topic. To learn about our commenting policies and how we moderate, please read our Community Guidelines.