case centres on the impacts of the construction of the Kenny Dam
Jun 9, 2020 9:40 AM By: Hanna Petersen 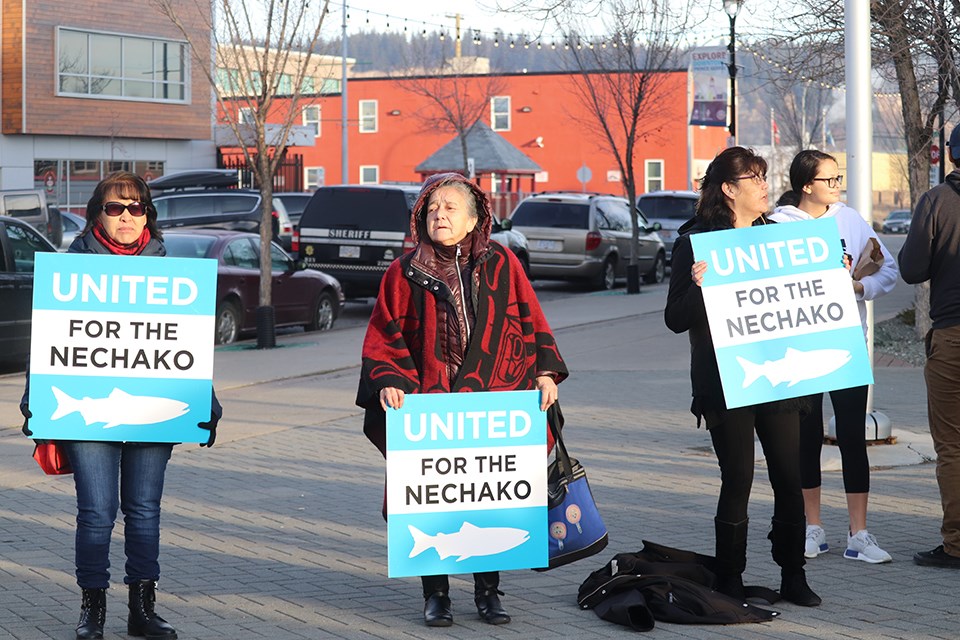 'Rally for the River' took place at the Prince George Courthouse in Nov. 2019 as Saik'uz and Stellat'en First Nations take legal proceedings against Rio Tino for the construction of the Kenney Dam. (via Hanna Petersen)

Saik’uz and Stellat’en First Nations are expected today (June 9) to conclude their part of a landmark court case against Rio Tinto (Alcan), the government of B.C. and Canada.

The two communities launched legal action in BC Supreme Court in 2011 to save the Nechako River and its fisheries.

The case centres around the impacts of the construction and operation of the Kenney Dam on the Nechako River and Saik’uz and Stellat’en’s constitutionally protected Aboriginal rights, including fisheries on the river.

Alcan diverts approximately 70 per cent of the water that would normally flow into the Nechako River from its source each year to generate power in Kemano, B.C. for the Rio Tinto (Alcan) aluminum smelter in Kitimat and for the sale of hydropower to BC Hydro.

Since 1952, the project has resulted in enormous downstream effects in the Nechako River, particularly for Chinook and sockeye salmon, Nechako White Sturgeon and for the people and communities who live nearby that rely on the river and its fisheries.

“We thank the Elders, members of both communities and expert witnesses for their courage and testimony. It is never easy to provide testimony in court and their courage helps sustain our communities,” says Saik’uz Chief Priscilla Mueller in a news release this morning.

“Very few British Columbians know how construction of the Kenney Dam devastated the Nechako River, its fisheries and our way of life. Our court case will provide the opportunity for everyone to learn about this dark chapter in our history and the impacts on our constitutionally protected Aboriginal rights.”

Stellat’en Chief Archie Patrick stated, “I too wish to thank those who testified on our behalf over the past several months. It’s heartening to know that we’re not alone in holding Rio Tinto (Alcan), BC and Canada to account for the devastation of the Nechako. It is still hard for many people to contemplate the effects of taking approximately 70 per cent of the water that would otherwise flow into the Nechako River and diverting it through a 16-km tunnel bored through a mountain into an entirely different watershed.”

There is still a long way to go in this case. The court will now hear the cases of each of the defendants, starting with Rio Tinto (Alcan).

"Rio Tinto prefers to work in partnership with First Nations groups to build relationships that are mutually beneficial. Rio Tinto has, on a number of occasions, sought to find ways to resolve this issue without proceeding to court hearings," says a spokesperson for the company.

"Rio Tinto has always, and will continue to operate, with all of the required permits and approvals under applicable laws, including a 1987 tripartite agreement with the Canada and British Columbia governments that ensures protective flows for fish. Rio Tinto cannot comment further on this case while it is before the courts."

The trial was delayed earlier this year due to restrictions caused by the COVID-19 pandemic. It is now anticipated to wrap-up early next year, after 200 court days.

Note: This story has been updated to add comments from Rio Tinto (Alcan)