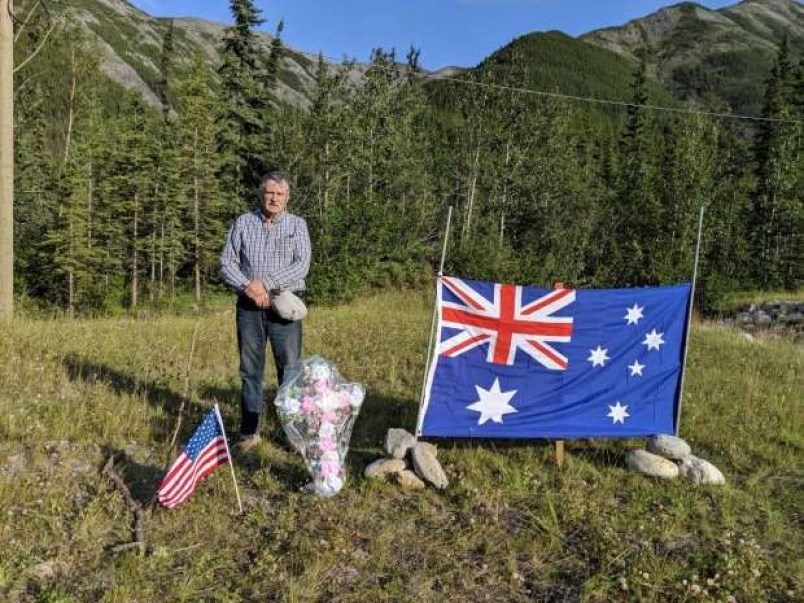 Ed Grennan has put up this memorial in memory of Lucas Fowler and Chynna Deese on the Alaska Highway. (via Ed Grennan)

A trucker from Whitehorse has made a memorial for two young international tourists murdered on the Alaska Highway last month.

Their bodies were found on the side of the road on July 15, just south of the popular tourist destination.

The memorial includes a floral cross set between the American and Australian flags. Grennan told CBC he drives the highway twice a week delivering goods to Fort Nelson.

"I lost a kid myself and I know. Everybody says they know, but I know," Grennan said. "The family that must be going through torture right now ... A lot of families are hurting."

Their suspected killers, Kam McLeod and Bryer Schmegelsky were found dead in the northern Manitoba brush on Aug. 7, ending a weeks-long nationwide manhunt that involved the police and military. The two appeared to have shot themselves to death, police said.

They were also wanted for the murder of Leonard Dyck, a Vancouver botany professor, whose body was found on Highway 37 near Dease Lake on July 19.

B.C. government to launch employer registry to safeguard foreign workers
Sep 20, 2020 5:05 PM
Comments
We welcome your feedback and encourage you to share your thoughts. We ask that you be respectful of others and their points of view, refrain from personal attacks and stay on topic. To learn about our commenting policies and how we moderate, please read our Community Guidelines.