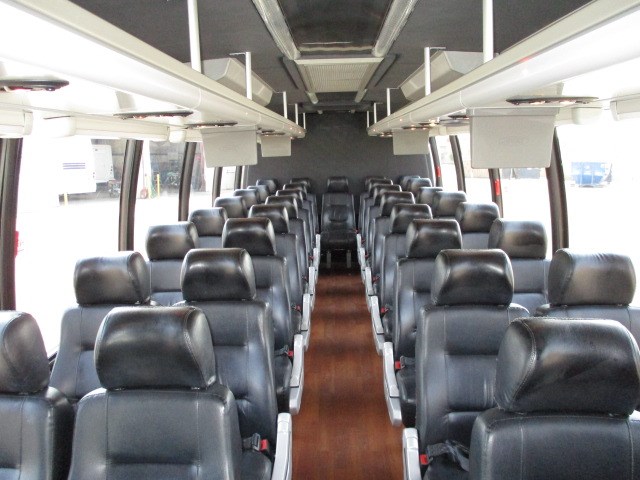 The inside of the bus that would travel from Prince George to Surrey. (via Adventure Charter and Rentals)

When Greyhound announced they were pulling out of B.C., it created a problematic situation for many and especially those in the north central interior of the province, like Prince George and Kamloops.

"We felt like the north and interior portions of the province were left in limbo when Greyhound stepped out of the province," Owner of Adventure Charters and Rentals Janna Gertzen tells PrinceGeorgeMatters. "We watched for the first little bit after Greyhound pulled out to see who would step up. We assumed a bigger company would come in and take over all the routes, especially when we knew that there was a test program with government backing from Prince George into the north."

Gertzen also notes a smaller company also applied during that time and was awarded a license.

She says there is only one license issued for each area, which left them unable to apply.

"Unfortunately, the other company was unable to begin operations but they have been holding that license since," she adds. "Once we learned they were struggling to get equipment and capital together we decided we better have a serious look at the viability of the routes and if Adventure Charters was the right solution to the problem. In the end, we decided, yes, we can do this and do it right. So many small communities like Quesnel, Williams Lake, 100 Mile House, and even places like Boston Bar and Lytton where they are cut off without direct travel to bigger service centres and that needs to change."

The outside of the bus that would travel from Prince George to Surrey. (via Adventure Charters and Rentals)

Gertzen also says operators that were already providing transportation had left anything north of Hope to Prince George, through the Fraser Canyon corridor and Kamloops north, without services. For example, you can get from Fort St. John to here in Prince George, but then that's where the options are slim to none.

"How does that passenger get to Kamloops, Vancouver or anywhere in between?" she says. "We wanted to build a route that easily connects to the operators who are terminating in Prince George and Kamloops to allow passengers to get from one end of BC to the other, and our routes are the holes left in the grid."

One key Gertzen thinks will help the company is they already have seven units in their fleet and they are also family owned, something that makes the company more agile and is able to successfully operate with lower overhead compared to Greyhound.

Adventure Charters and Rentals submitted their application in January of this year, and the application was then published on Feb. 27. She says the Passenger Transportation Branch has a decision goal of 60 days.

If successful, Gertzen says both routes would begin operation with a minimum service of twice a week and the company could increase frequency as ridership numbers go up.

"If we find it’s needed and we also have additional buses we can put on a run for peak times of we need greater capacity," she says. "Because we are smaller and based in the North we can adapt quickly and easily."

If the company does get the go-ahead, the primary bus for Prince George to Surrey would hold 36 passengers while the Williams Lake to Kamloops would be able to transport 20 riders.

Prince George passengers would also be able to transfer in Williams Lake to or from either route.

There are no current ticket pricing options or a tentative scheduled as of yet; Gertzen says the company wants to be able to integrate into the connecting operators and currently are working those details out.