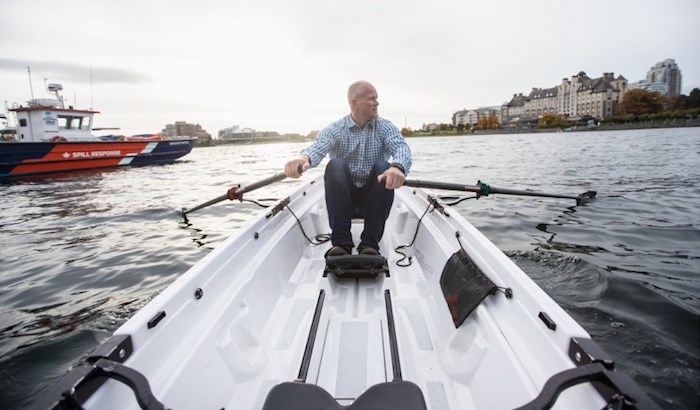 Adam Kreek rows the Whitehall Spirit Rowing Club boat he will use if Greta Thunberg takes up his offer for a trip to Victoria. (via Glacier Media)

Adam Kreek can easily imagine a flotilla of boats paddling teen climate-change activist Greta Thunberg across the strait to Victoria on Saturday.

When the Olympic gold medallist rower learned Thunberg would be in Vancouver Friday (Oct. 25), but had been rumoured to have passed on the opportunity to visit Vancouver Island because the ferries run on fossil fuels, Kreek immediately offered to row the teenager across the water.

“Greta is just a beacon of hope who unites people,” Kreek said Tuesday. “Greta has been able to cut through the noise. She’s been able to get the message out that the climate is hurting and we need to take action. A number of people have already told me they’re interested in joining the flotilla.”

Thunberg has people travelling with her who will also need a fossil-free trip to Victoria, he said. “So we could figure out a way to make that happen. I think we could have a lot of fun with it.”

B.C. Green Party Leader Andrew Weaver said he extended an invitation to the 16-year-old Swede to speak in the legislature. He has spoken to Speaker Darryl Plecas, who has agreed to allow Thunberg to address the legislature if she is willing, Weaver said.

“PS. I don’t know anything about an invitation to Victoria, and I have definitely not declined it because of “emissions” from the public transport ferry. Just so you know:) I try to visit as many places as I can, but there’s unfortunately not enough time to visit everywhere.”

Kreek, his wife Rebecca and many others were hoping to make the trip a reality. “It really depends on Greta’s schedule. It’s an offer. It’s out there. It’s in Greta’s camp. We have enough time to get rowboats over to Vancouver.”

“I think we could bring her over on Saturday and bring her where she needs to go on Sunday, maybe down to Seattle,” said Kreek.

On a windswept dock at the Inner Harbour, Kreek walked over to the White Hull rowboat that could be used to bring her here.

“We’d probably sit her in the stern and there would be two of us rowing. I wouldn’t expect Greta to row at all, but I would expect her to dress warmly. A survival suit would be good, especially this time of year.”

Kreek estimates the trip could take four to eight hours.

“Saturday will be windy, but manageable, so it will be adventurous,” said Kreek with a laugh. “We’d want to start early because the weather is always better in the morning. Sailboats would be easy to get her across too. So we shall see.”

Kreek, whose hands are roughened by blisters and callouses, is still training and competing and up to the challenge. “You put these things out there and you put your hand up there to say: ‘I can help’ and if it helps, it helps.”

Coun. Ben Isitt said he reached out to a contact in Vancouver last week, inquiring about Thunberg visiting Vancouver Island. “The main obstacle that was identified at that point was the lack of a fossil-fuel free transportation option. With Kreek’s offer, Thunberg and her team are considering a visit, he said.

Isitt said he, like many other people, would be “honoured” to welcome Thunberg. “Greta Thunberg is leader of a worldwide movement demanding a more sustainable economy and society. She’s hugely inspirational to myself and tens of thousands of residents of the region.”

Victoria Mayor Lisa Helps, who was among those inviting Thunberg to the Island, applauded the teen for standing on principle. “I think it really speaks to the reason that she’s touring around the world in a zero-carbon way,” Helps said.

“She and literally millions of young people around the world are fighting for their future and asking us adults to take that seriously. I think it’s almost poignant that she would come and see us, but for the fossil fuels that she’d need to burn to get here.”

Helps praised, as well, the community’s efforts to rally behind Thunberg and try to overcome the obstacles that prevent her from visiting. “It does again speak to the creativity and innovation of Victorians that someone is literally willing to row her there and we confirmed he will also row her back, so she won’t be stranded here.

“I hope that she and the team she is working with will be inspired by the energy and enthusiasm that Vancouver Islanders have, to have this young dynamo come and join us here for a while.”

Climate activist Emma-Jane Burian, 17, of Victoria said she hopes Kreek’s proposal works out. “All I know is that they offered, and the mayor of Victoria and the mayor of Saanich echoed that and said we would be really grateful if she could come through the means of rowing.”