On Our Radar: Prince George rally planned in support of We’tsuwe’ten Hereditary Chiefs 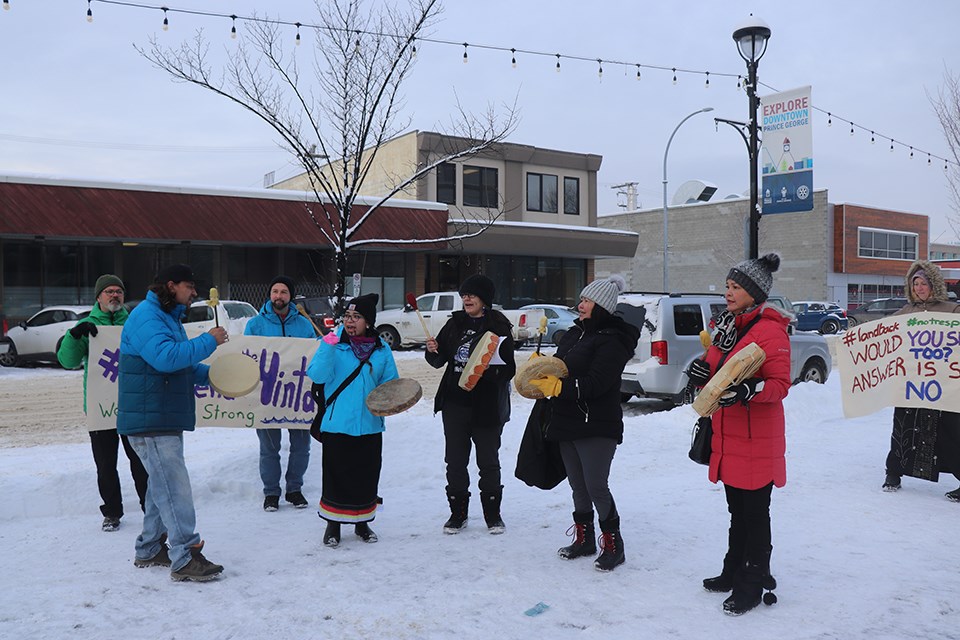 A similar rally was held at the Prince George Courthouse in support of Wet’suwet’en Hereditary Chiefs opposing Coastal GasLink's pipeline on Jan. 9. (via Hanna Petersen)

As demonstrations take place across the country in support of We’tsuwe’ten Hereditary Chiefs who oppose the Coastal GasLink pipeline, a rally is being planned in Prince George this weekend.

“Please come, bring signs, bring your drums, bring your voice, and let us show the RCMP that this violence in the name of industry isn't acceptable,” reads a Facebook event post.

This demonstration and other protests across Canada are in response to RCMP enforcement of a court injunction last week against Wet'suwet'en Hereditary Chiefs and their supporters, who had been blocking construction of the pipeline, which is a key part of a $40-billion LNG Canada liquefied natural gas export project.

Blockades along train lines have also sprung up across the country in response to what has been called a “volatile” situation.

CN Rail has cancelled services in eastern Canada, while Via Rail has halted its services all across Canada.

CN's route between Prince George and Prince Rupert is also at a standstill as a blockade is set up near New Hazelton.

Many wheels are now in motion in response to the ongoing anti-pipeline demonstrations.

B.C. Indigenous Relations Minister Scott Fraser says he will represent the provincial government at a meeting with Gitxsan and Wet'suwet'en Hereditary Chiefs.

Indigenous Services Minister Marc Miller is also offering to meet with three Indigenous leaders in Ontario as the federal government seeks a solution to rail blockades in several areas of the country.

Premier John Horgan has agreed to work toward a period of calm amid spreading protests over a natural gas pipeline in northwestern B.C.

In a letter of response to a proposal from a Gitxan Chief Norman Stephens, Horgan says either he or a senior cabinet member will attend a meeting with Indigenous leaders.

The premier says he expects his agreement will prompt the lifting of a blockade of the Canadian National Rail line though the region in northwestern B.C. His letter also urges Prime Minister Justin Trudeau's government to respond as quickly as possible.

Meanwhile, Hereditary Chiefs from the Wet'suwet'en First Nation have launched a constitutional challenge of fossil-fuel projects.

The challenge calls on the Federal Court to declare that Canada is constitutionally obliged to meet international climate-change targets, which the chiefs contend would cancel approvals for the Coastal GasLink line.