Opinion: Be afraid. Be very afraid. It’s the Politicians 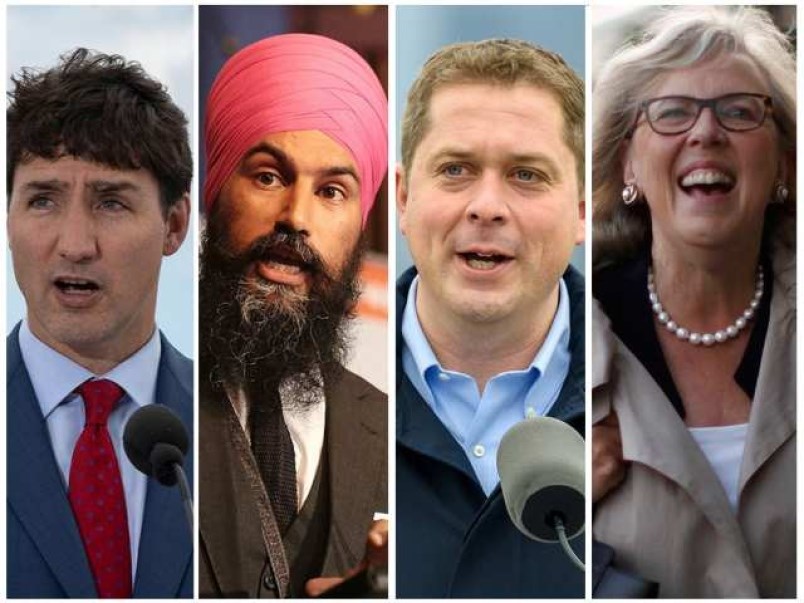 The doorbell rang, which is never good news. Who could it be? Too early for trick or treaters. Religious zealots? Bottle drive? Oh, Lord, please don’t make me explain the empties to another smirking 10-year-old.

I bent down and shouted through the letter slot. “Who is it?”

“Thank goodness,” I said, swinging the door open. “I thought it was politicia…”

“We’re ba-ack!” they chanted, just like that little girl in Poltergeist. Justin, Jagmeet, Elizabeth, Maxime and Andrew, jostling on the porch like kids at an ice cream truck.

“You lied,” I accused them.

“Get used to it,” muttered one in reply, though I couldn’t tell which because they were all trying to elbow in front and out-shout one another.

“Trudeau has a face paint addiction.”

“The Joker called. He wants his creepy smile back.”

“Hey, Max, check the back door. Somebody might be trying to sneak in.”

One of them gripped my arm and stared into my eyes with great solemnity. “Brace yourself: Andrew Scheer is not an insurance broker.”

I frowned. “What happened to affordable housing?”

“I clearly remember you all talking about affordable housing when the campaign started. Trudeau even made an announcement in a Victoria condo project.”

Trudeau scrolled back through the photos in his phone: “Jeez, he’s right.”

“And health care,” I said. “Singh was rattling on about pharmacare when he was in town last week. Promised $40 million for coastal protection, too.”

Singh nodded his assent. “And don’t forget $30 million for B.C. Ferries. I was kind of in a groove.”

May elbowed Singh in the ribs, allowed herself a little smirk: “I said I’d tax robots.” They all grinned. Scheer broke into a robot dance (or maybe he was doing Harper).

Then they relaxed, began waxing nostalgic about all the policies and promises they have unveiled so far. Student loan forgiveness. Gun reform. Ceilings on cell phone fees. Growing the carbon tax. Repealing the carbon tax. Saving the world.

Frankly, it has been hard to keep up. Even now, promises rain down like candy from a parade float. A tax on luxury cars. A federal Family Day holiday. Caps on ATM charges. Planting two billion trees. Planting 10 billion trees.

Except nothing’s really sticking, is it? No one is quite sure what this election is all about, so now it has shifted to the trivial and the distracting, the sideshows outdrawing the main stage as the leaders go after each other’s supposed flaws.

Not that we in the news media aren’t complicit. It usually goes something like this:

Trudeau at a campaign stop: “Today I would like to unveil sweeping agricultural reforms that promise prosperity to canola farmers here in Broken Dreams, Saskatchewan.”

Trudeau: “Um, vestigial tails have no place in a free and open society.”

Scheer: “I don’t have a vestigial tail, but you might want to check Bernier.”

May: “I thought Singh was better than this. You should be disappointed in him.”

Times Colonist editorial -- “Tailgate: Let’s get to the bottom of this” (the TC has some very clever headline writers).

Then a Saanich man will step forward and, while coaxed by the cameras to drop trow just enough for the photos we all want to see, tearfully declare himself devastated by Trudeau’s “tailism.”

This will force Trudeau to go on the defensive: “I misspoke. Unlike  my Conservative, Green and New Democrat opponents, my government remains fully committed to a nation in which all Canadians may display their vestigial tails. As a sign of my commitment, I promise to grow one myself, because it’s 2019.”

In a cheeky piece of programming CHEK will air Wag The Dog, a documentary on democracy in action.

Two weeks to go before we set the course for the next four years.