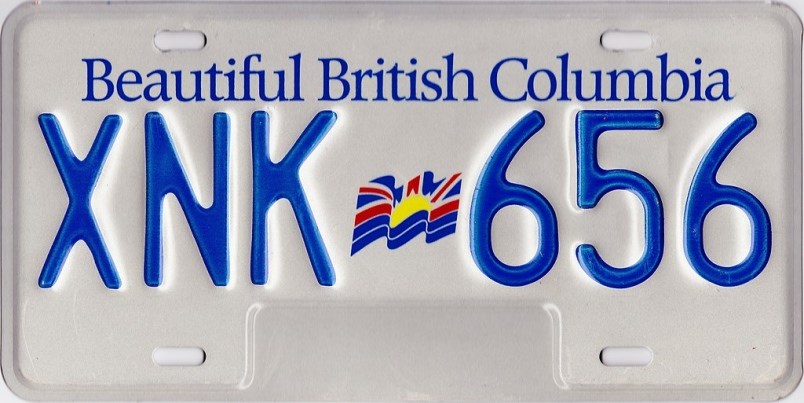 There once was a time when B.C. was not beautiful. That time was 1964.

Ever since then, we have been reminded, whenever we pull up behind the car in front of us, that we live in Beautiful British Columbia. It says so right on the licence plate. At least, we think it does. Sometimes it’s hard to see through all the exhaust.

Licence-plate mottos are in the news because of plans to replace Ontario’s vaguely poetic “Yours to Discover” with the billboardish “Open for Business,” at least on commercial vehicles.

That said, provinces change the words on their plates all the time. They’re etched in aluminum, not stone. Ontario last swapped things up in 1982, dumping “Keep It Beautiful” after someone noticed the smog-belching hell of the 401 and realized it was too late. In Quebec, René Levesque ditched “La Belle Province” in favour of “Je Me Souviens” (literal translation: “It’s not over, squareheads”) in 1978.

“Friendly Manitoba” — a slogan that damns with faint praise, like Miss Congeniality — arrived in 1976. Saskatchewan has been the “Land of Living Skies” since 1998 (though for a laugh, it should try aping the T-shirts: “Easy to draw, hard to spell”). No truth to the rumour that Alberta will switch from “Wild Rose Country” to “Wild-Eyed Country” if Jason (Turn Off the Taps) Kenney wins next week’s election and goes Dr. Strangelove on his fellow Canadians.

Tiny Prince Edward Island changes slogans more often than Alberta changes governments, doing so eight times since 1962, with some of the more eye-catching offerings being “Garden of the Gulf,” “Home of Anne of Green Gables,” “The Place to Be in ’73” (a slogan that actually hung around until 1975), the stately “Birthplace of Confederation” and the somewhat more prosaic “Seat Belts Save,” a message echoed by Ohio’s “Seatbelts Fastened?” and Maryland’s “Drive Carefully.” (American mottos, from New Hampshire’s “Live Free Or Die” to Idaho’s “Famous Potatoes,” have stories of their own: “Georgia … on my mind” was the only plate with lyrics by Ray Charles, while the “Sweet Home” on Alabama’s inspired drivers to thrust fists out the window and bray “Skynyrd!” to the embarrassment of their children.)

Some plates, such as those in Newfoundland and Labrador (poor Labrador, the tag-along less-famous brother, like Dennis Hull or Frank Stallone), have no motto at all. New Brunswick’s don’t either, though for a while they read “Be … In This Place/Etre … On Le Peut” which sounded like an invitation to a bilingual ashram.

That brings us — finally — back home to B.C. where, as mentioned, the word “Beautiful” was added to our plates in 1965. (It makes you wonder what motorists did before that, whether after gazing up at the awe-inspiring majesty of the Rockies or out over wondrously shaded Markgraf coastal vistas they shook their heads in frustration and thought: “This province is so, so … damn it, if only there were a word to describe all this.”) This means ours is easily the oldest licence plate motto in Canada. The question is: Is it time for a change?

Such as “British Columbia: Closed for Business.”

Or “British Columbia: Not as beautiful as before but still pretty hot if you don’t look too closely.”

Or “Come for the super-cheap gas, stay for the house prices.”

And maybe we could have our plates made by prison inmates, as Ontario does, instead of ordering them from a company in Nova Scotia (“Canada’s Ocean Playground”).

No, let’s keep the status quo, keep the slogan as is, as only it fulfils the real purpose of a good motto: to gloat. Traditionally, what Beautiful British Columbia really tries to say to other Canadians, in a humble-bragging kind of way, is: “Better looking than your province, and we both know it.”

It’s like the Victoria Flower Count, a light-hearted reminder to the rest of the country that at a bleak, frostbitten time of year when they can only pray for the sweet release of an icy death like the one that claimed Jack Nicholson in The Shining, we here in God’s Country are lolling about in a Shangri-La where the blossoms arrive before your T4 slip.

Eat your heart out, Ford.