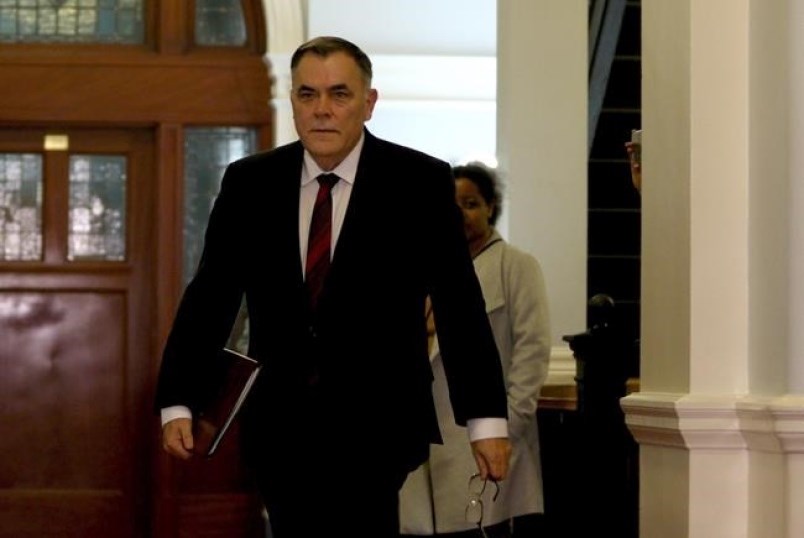 In December, British Columbia House Speaker Darryl Plecas promised to resign if a financial audit he recommended didn't prompt public outrage and back his handling of a controversy that has engulfed the province's politics.Photo Chad Hipolito/The Canadian Press

“You don’t have to be in the building long to know that something is off.”

So said Alan Mullen, the special advisor to B.C. Speaker Darryl Plecas, as he described the culture Monday of the office he joined a year ago, where he would soon launch into a review of its operations that ultimately sent its two top legislative officials packing.

For nearly two months, clerk Craig James and sergeant-at-arms Gary Lenz have been wondering what was behind the investigation in their conduct, why the RCMP had been summoned and why they were marched into the street. Really, truly, it appears they shouldn’t have.

Monday, quite belatedly, they and we got the full meal deal.

Alcohol carted away. A wood splitter somehow on the tab. An Apple Music subscription and as many as nine devices in tow at once. Online courses for personal education. Magazines that appear to have no bearing on legislative duties, unless Electric Bike Action is a transportation plan in the district.

And, most importantly, a culture in which they looked after each other yet oversaw employees who shouldn’t have been demeaned and dismissed.

All in all, a pretty ugly series of allegations attached to a five-inch binder of evidence that suggests millions of dollars did not go where they ought to have — “a real possibility that crimes may have been committed,” Plecas said in his report.

The report even says Lenz at one point thought James should be fired and shouldn’t be trusted, that he was a Liberal apparatchik — and indeed, the expense claims make it appear he liked Liberal company. In turn, though, both walked the plank into paid leave.

They will be given an opportunity by the Legislative Assembly Management Committee (LAMC) to respond by month’s end before their fates are determined, but it is difficult to see how they could return unless the report is fabricated from whole cloth. The two stated late Monday that they were shocked by what they read, that the secretive and non-consultative process was unfair, and that they will in due course respond. As for the police investigation, it persists and nothing in Monday’s revelations ought to impinge upon the probe.

Plecas paints a fascinating picture of the Speaker’s office: on day one, a full liquor cabinet that he was told would stock whatever he wished, fresh flowers every couple of weeks, a pitcher of ice water twice daily at the ready. He was stunned to learn that he was signing off on life insurance policies for Lenz and James and that he was repeatedly approving expenditures as part of a culture of entitlement. The officials were essentially unchecked in their determination of how to spend.

That he didn’t stop the train is a question we ought to ask. The best we can infer is that Plecas didn’t want to ruin his relationship with the clerk before he could conclude it was irreparable. Nothing in the report suggests Plecas himself benefited, except on occasion to be dragged along and encouraged to play the game.

That all being said, there is some good that appears to emerge from the mess dropped on our door. The committee determined Monday that there are studies that need to be done, including an audit from afar of the workplace. Plecas believes there needs to be a higher degree of transparency of expenses, of practices, and of the appointment process, and the committee supported him in that regard.

On a personal note, it is worth considering the critiques of Plecas and Mullen these last few weeks in a different light. They at first appeared to be clumsy, self-interested outsiders undermining and sandbagging respected officers of an institution that served the public interest.

Today, that can’t be said, even if we don’t know what will ultimately be done.