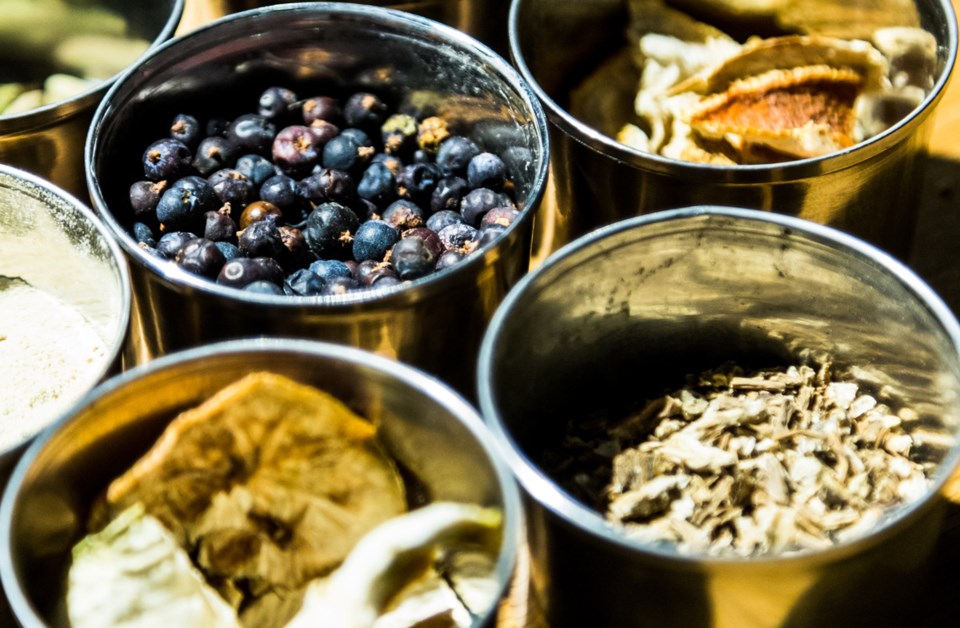 Some of the botanicals used to make gin; juniper, in the centre, is the only one that is absolutely essential. (via contributed)

When news arrived that Sooke’s Sheringham Distillery had scooped Best Contemporary Gin in the World at the prestigious World Gin Awards, I, like so many others, was truly thrilled. After all, what an achievement for the relatively neophyte distillery perched on Canada’s wild and westernmost edge.

But there was also a personal connection, as the awards were judged at London’s Honourable Artillery Company, right across from where I used to stay at my Uncle Ricky’s apartment.

Ricky was a true Londoner of his era. In the City, he always wore a bowler hat. He liked his daily gin in civilized pours and his martinis dry, with mere vapours of vermouth, exhorting: “Just wave the cap at it, old chap!”

It was his generation, and the few before (all now sipping in eternity), who for years shaped our perception of precisely how “good” gin should taste.

That was a citrusy, juniper-forward style of gin known as London Dry, a flavour profile that came about as the result of two things: the introduction of the Coffey still in 1832 and the purity standards established by Parliament in the wake of the Gin Craze of the 18th century.

Those standards were enshrined in response to the ravages wreaked on the city when some 7,000 gin shops catered to the population’s insatiable demands, most of them selling crudely made spirits that were flavoured with botanicals to hide their rough edges.

But although the presence of juniper is what defines a gin (the name evolved from genever, the Dutch word for juniper), in recent years, London Dry gin has yielded ground to more international styles made with a huge array of botanicals ranging from saffron to olives to berries, flowers and seaweed. That, in turn, has spawned a renewed interest in the spirit, especially in the UK, where gin is regaining significant market share.

Freed from the shackles of conformity, gin is being respectfully (in most cases) transformed by distillers who, very much like winemakers, are seeking a sense of terroir. But they are defining terroir not just in terms of the flavours the land yields, but in the culture and customs of the people who inhabit it. Often as not, these gins celebrate local ingredients.

In Sheringham’s case, Seaside Gin incorporates kelp into its recipe. Owners Alayne and Jason McIsaac were so taken with the freshness of the sea air around Sooke that they decided to somehow find a way to work it into the bottle. Winged kelp sports “bright and clear flavours,” says Jason, as well as umami “and a lovely salty brininess.”

In a sense it was, very much, their own terroir moment.

It is very satisfying as a distiller to create a gin from local barley, rather than using grain neutral spirit purchased from elsewhere.

Further north on Vancouver Island, Shelter Point Distillery, which is already making a name for its artisan single malts, recently launched Hand Foraged Botanical Gin, which is made from barley grown right on the farm near Campbell River.

Shelter Point’s Leon Webb says: “It is very satisfying as a distiller to create a gin from local barley, rather than using neutral grain spirit purchased from elsewhere.” Botanicals include coriander, lemon and orange peel to produce rounded citrus and juniper with lingering subtle spice notes. Shelter Point suggests the gin is a natural complement to its mantra: to use as many local ingredients as possible.

Across the Salish Sea, on the Sunshine Coast, One Foot Crow Distillery’s 100 proof Gunpowder Gin offers a somewhat piquant “blast to the past”: It is infused with black pepper that delivers a serious kick. Owner Bob Bottieri says his gin has a seafaring inspiration.

“In the days of the sailing ships, British sailors were given a daily ration of rum. To ensure that some unscrupulous captain had not watered it down they would perform a simple test by pouring some rum on gunpowder,” Bottieri says. “If the powder ignited, they took it as ‘proof’ that the rum was unadulterated.” A natural choice for spicy Caesars or Bloody Marys, he says, the gin already has a loyal following who just like to sip it plain or in a livelier version of a classic Martini.

Pure craft advocates opt to stay as close to home as possible. Witness Forest Dweller Coniferous Aged Gin from Arbutus Distillery in Nanaimo, which is aged with a variety of conifer species that impart a distinctive woodsy character to its otherwise citrusy grapefruit and orange notes.

Nothing says West Coast more than the hints of cedar in this gin, which while surprising at first, ultimately presents a harmonious and intriguing finish.

You don’t have to look far to find still more variations on uniquely local gins, as well as often unlikely but truly satisfying local flavour combinations. After all, who would have thought honey-based Unruly Gin (which also echoes a sprig of cedar, as well as citrus) would be such a shoo-in for Fanny Bay oysters on the half shell?

While entire cemeteries filled with the ghosts of bowler-hatted purists could well be stirring at the thought, there’s no question that such regional inspiration is here to stay.