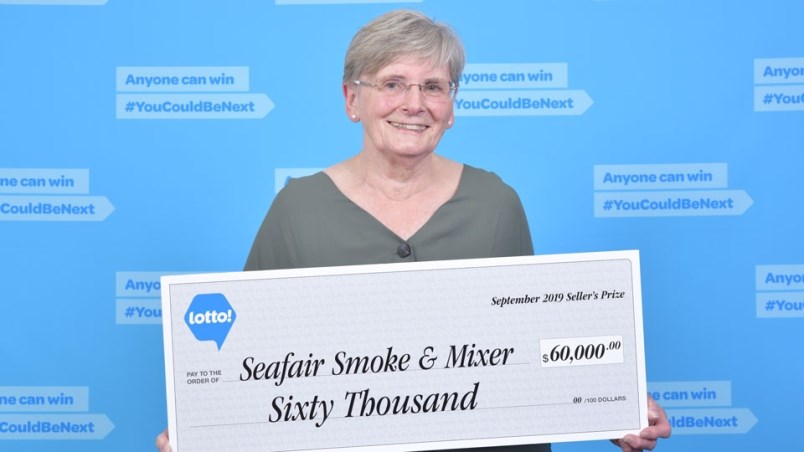 Verna Holmes, owner of Seafair Smoke & Mixer, picked her retailer's cheque for $60,000, after she sold the record-breaking Lotto Max ticket to a retired fisherman in July. (via Contributed)

The Richmond shop owner who cashed in after selling the winning $60-million Lotto Max ticket said she’s going to take her staff out for dinner.

Verna Holmes — who has sold lottery products for more than 35 years at her Seafair Smoke & Mixer at Seafair Shopping Centre on No. 1 Road — was awarded $60,000 by BCLC on Tuesday (Sept. 3), the largest-ever seller’s prize.

In July, she sold the record-breaking lotto ticket to retired Richmond fisherman Joseph Katalinic, who picked up his cheque two weeks ago after matching all seven numbers to win the largest lottery prize in B.C. history.

BCLC awards retailers who sell a winning ticket with a prize of over $10,000, with a percentage of the prize paid (which varies depending on the total prize paid).

Holmes said the $60,000 prize will support her family to live more comfortably and she also plans on taking her staff out for a nice dinner.

“It was an awesome feeling being told we were the retailer that sold the winning ticket,” she said Tuesday.

“It was exciting, and I’m still over the moon…We’ve become very busy lately, and our customers have been congratulating us ever since!”

Kevin Gass, BCLC’s vice president of Lottery Gaming, said they “love to share in the excitement that comes along with not only winning the lottery – but also selling the winning ticket.

“Our valued retail partners provide a critical role in supporting our players’ experiences and delivering sustained revenue to (B.C.) and I couldn’t be more proud to present the largest-ever seller’s prize in B.C. to Verna…a true pioneer of lottery in B.C.”

Retailers enter into Lottery Retailer Agreements with BCLC that set out roles, responsibilities and compensation, including the seller’s prize program.

Richmond's $60M lotto winner is a retired fisherman
Aug 21, 2019 1:45 PM
Comments
We welcome your feedback and encourage you to share your thoughts on this story. We ask that you be respectful of others and their points of view, refrain from personal attacks and stay on topic. To learn about our commenting policies and how we moderate, please read our Community Guidelines.