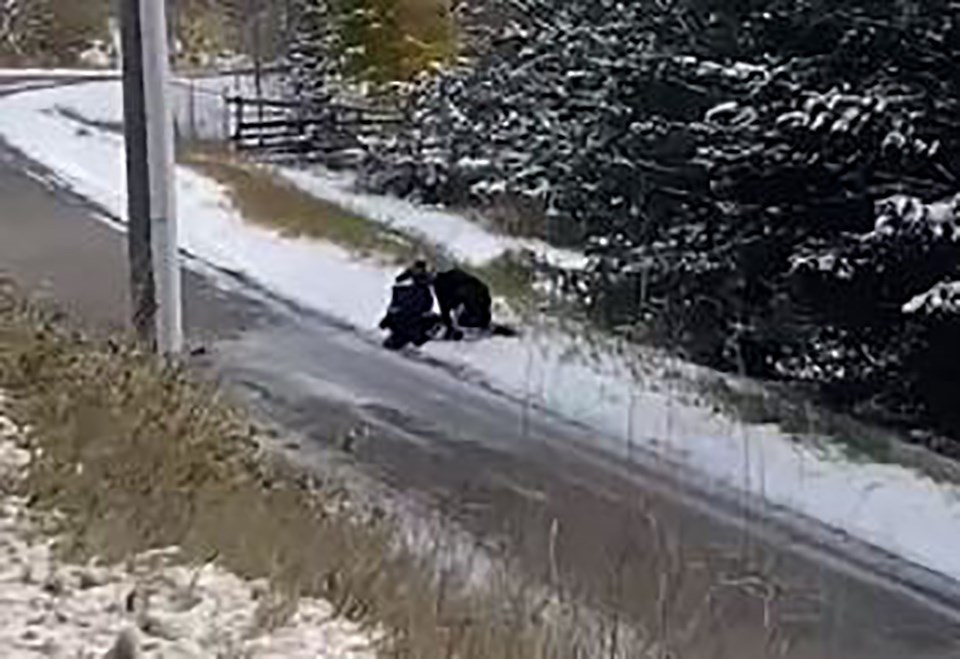 A still from the witness video of the Highway 97 arrest in Williams Lake. (via Facebook)

The Independent Investigations Office (IIO) of BC has been called in to investigate an arrest caught on camera in Williams Lake last month, where responding officers are seen kicking and punching the suspect.

The series of events began in Kamloops, just before 9 a.m. on Sunday, Oct. 25. Local police were notified of an erratic driver in a pickup on Highway 1; a caller told RCMP that the driver was allegedly crossing on double solid lines and was unable to maintain their lane.

The suspect continued on and failed to stop for police in Clinton and in 100 Mile House. A news release at the time stated an officer was almost hit when trying to stop the pickup in 150 Mile House.

The vehicle was eventually demobilized by two spike belts and came to a stop near White Road on Highway 97 in Williams Lake.

In a video posted by passerby Charli Fortier on social media, the suspect exits the pickup and runs down an embankment, followed by officers.

A struggle with the officers ensued, says the IIO, and the man was taken into custody without sustaining serious injuries.

The police watchdog says since the threshold for serious harm as defined by the Police Act was not met, IIO notification was not required.

"However, video captured of the incident at varying times, particularly that of the man's arrest, has attracted significant public scrutiny," the IIO says in a Nov. 20 news release. "In light of this, the RCMP requested that the IIO consider seeking direction from the director of police services for an independent investigation of the incident."

That independent investigation was launched on Nov. 17. It will determine whether any officer may have committed an offence during the incident and arrest.