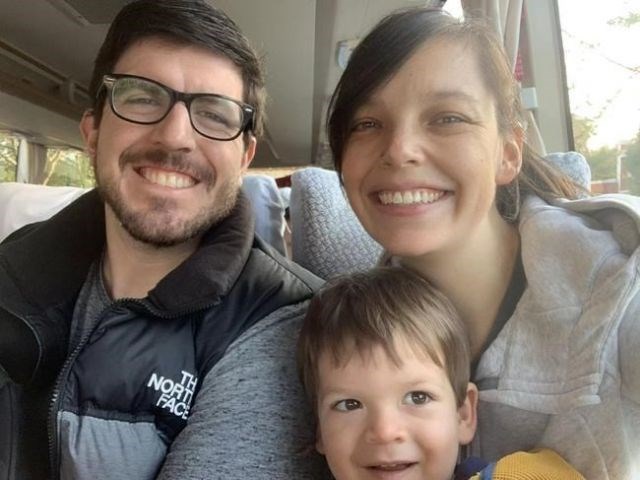 Tom Williams along with his wife Lauren and son Jam. (via Tom Williams)

A teacher who is living with his pregnant wife and child in a city that is at the epicentre of China's coronavirus outbreak is hoping to get his family out safely.

Tom Williams is a British expat who has been living and working for about five years in Wuhan, which is the capital of Hubei province in China.

His wife Lauren, who is from Langley, B.C., is about 35 weeks pregnant, he said in a telephone interview from Wuhan. He also has a two-and-a-half-year-old son, James, who was born in White Rock.

“We are quarantined in the city,” he said.

While he said things are “pretty calm” and “under control” he noted the road closures have added a “little bit of worry” for when they will have to get his wife to the maternity hospital. She is due in the middle of February, he said.

He contacted the emergency hotline for the Canadian embassy over the weekend, he said.

Staff there put him through to Ottawa and he said he was told that he and his family should stay put.

“There’s no imminent plans to evacuate Canadians from the city,” Williams said, adding that he would like to get out of Wuhan “as soon as possible,” but was prepared for the alternative.

“If I have to stay behind, so be it. As long as my wife is guaranteed a safe birth.”

Other countries need to follow the lead of the United States, which has had a flight approved while working with the Chinese authorities, he said.

“Particularly for people who are at higher risk.”

China has now reported more than 2,700 cases of the new virus with at least 80 deaths, and officials say the rate at which it's spreading is accelerating.

Global Affairs Canada says 69 Canadians in the Hubei Province have registered with the voluntary Registration of Canadians Abroad service.