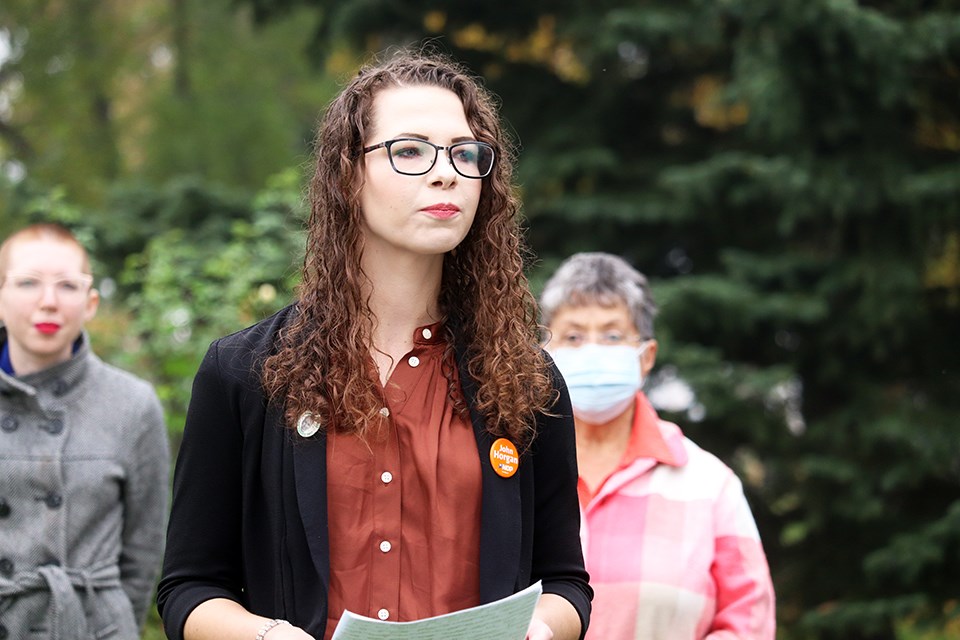 BC NDP candidate for the 2020 provincial election Laura Parent. (via Jess Fedigan, PrinceGeorgeMatters)

Age is just a number to Laura Parent and despite being just 21 years old, she's ready to charge full-steam ahead in the Oct. 24 B.C. provincial election.

She held her campaign launch last Friday (Oct. 2) at Connaught Hill Park, becoming the youngest candidate in the riding, and second under 25 with BC Green Party candidate Mackenzie Kerr at age 23.

At the event, Laura had the backing of former BC NDP Prince George-Mackenzie candidate Bobby Deepak, receiving high praise from the fellow party member.

"With the energy, hard work, ethic, passion for communities in the north, I think that Laura is going to make an excellent MLA for Prince George-Valemount. replacing the old with the new."

But despite the short time frame for campaigning and the Oct. 24 election date coming faster each day, Parent says she's motivated and ready, adding she believes it's time for a new face at the helm of the riding, which has been occupied by BC Liberal candidate Shirley Bond since 2001.

“It’s really important to have different perspectives in government. When you have someone new that can represent a riding, you get new ideas, change and energy into the role.

“I think it’s clear that the BC Liberals ideas in this riding have been tried and tried, and aren’t really making much progress. Those policies aren’t really applicable to northern B.C."

While many might believe Parent's age and lack of political experience won't get her far in this election, Parent believes that can be beneficial to the Prince George-Valemount riding specifically.

“Even though I’m young, I come from a family of loggers and healthcare workers so I know what that’s like. I know what it’s like to live in a resource dependant family," she tells PrinceGeorgeMatters.

“I have older people that I care for in my life and I’ve watched them struggle through the healthcare system and that is so upsetting. So I think I bring that empathy and compassion role to listen to people and what they need.

"I’m not as inexperienced as people like to think. I’ve been involved in the internal UNBC government system for quite a while now. Obviously, UNBC hasn’t had the easiest year with first the strike and then the pandemic. I have a position on senate and not only that, I’m the vice-chair of the university senate and that’s a role that a lot of professors won’t even wade into. It’s a role that I’m proud to serve and represent students and faculty and the university community. So I am familiar with the way those things work, with the way government works and I’ve got a long-standing reputation with UNBC."

With Bond now seeking her sixth term, which would mark more than two decades as an MLA, Parent believes it's time to take over the riding, claiming, if not apart of the official government, Bond can't make any major changes or strong influences.

"I think it's excellent [running against experience candidates], actually," Parent said at her launch.

"I think people in our riding are realizing that our current MLA [Shirley Bond] is not a member of the government and is really limited in her power to do things. Shirley is a wonderful person, she is a wonderful MLA for Prince George but she's tired. I think it's time that Shirley dedicated more time to her family and I'm looking forward to filling her shoes."

The fourth to round out the riding is BC Libertarian Sean Robson.

The BC NDP and BC Liberals both have 87 candidates running across the province with the Greens having the third most with 74.