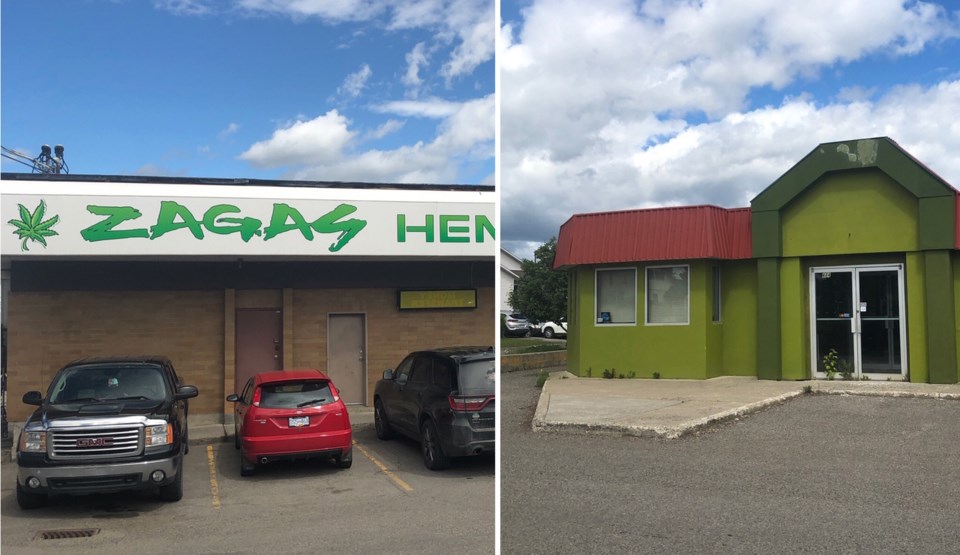 Zagas Hemp Shop on Victoria and the future Shire Green on Douglas have each been granted three-year temporary use permits to sell retail cannabis. (via Hanna Petersen)

Both businesses have Liquor and Cannabis Regulation Branch approval, and now after an informal public hearing and unanimous vote from council, both businesses also have a cannabis license and three-year temporary use permit allowing for the sale of the retail sale of cannabis.

“We have created trust with our customers many of them have been with us since our opening,” said Ginny Burnett during her presentation to council.

Zaga’s is currently located at 1543 Victoria Street in the Redwood Square and is not located near any schools or residential housing.

Burnett opened Zaga’s Hemp Shop with her husband Fred in 2004, and together, they have been successfully running the business for 15 years.

“Our customers have been constantly asking us when will we start selling cannabis. It’s a natural progression with our shop.”

She said they first approached the province in August 2018, and have been working closely with the city since February 2018, and given approval would be ready to start selling once they receive the products.

“I appreciate the applicant’s due diligence,” said Coun. Kyle Sampson. “They’ve put together a great presentation I think they are going to be smart stewards of this product in our community and lead by example. I appreciate their willingness to work with us.”

With no one speaking in opposition to the Burnetts’ application, it was quickly passed unanimously by council.

Shire Green, however, faced two concerned speakers during the public hearing process as well as a letter in opposition that included 25 signatures.

The business would be located at 484 Douglas Street, in the green building which at one point used to be the restaurants Mai Thai and Taco Time.

“We have diligently planned out a brand new store offering that is state-of-the-art which we feel will appeal to the middle-class consumers of this product,” said co-owner, Ted Brown during his presentation to council.

Shire Green owners Brown and his business partner Justin Mousseau also own and operate the nearby BX Neighbourhood Pub and BX Cold Beer and Wine store.

Ken Simonar, who lives in the neighbourhood, spoke about his concerns regarding the parking and traffic congestion the business would bring to the area.

“We are not opposed to cannabis stores in the community,” said Simonair. “The location of these stores needs to be very strategic and mindful and vehicular and pedestrian traffic will be affected. After careful thought and consideration, we are not in favour of a retail cannabis shop at this location.”

After a second speaker voiced concern about Shire Green’s name being closely related to the Lord of the Rings series which is popular with children, many councillors spoke in favour of the applicants.

“I hear their concerns, but when it comes down to the root of the concern it was about traffic and parking and simply based on the fact that it was a restaurant before […] I think I will be supporting the application tonight,” said Con. Sampson.

The city has also approved two B.C. Cannabis Stores to be located in College Heights and Pine Centre Mall.

Prince George RCMP seize $1 million in cannabis, cash and guns
Apr 1, 2019 3:20 PM
Comments
We welcome your feedback and encourage you to share your thoughts. We ask that you be respectful of others and their points of view, refrain from personal attacks and stay on topic. To learn about our commenting policies and how we moderate, please read our Community Guidelines.