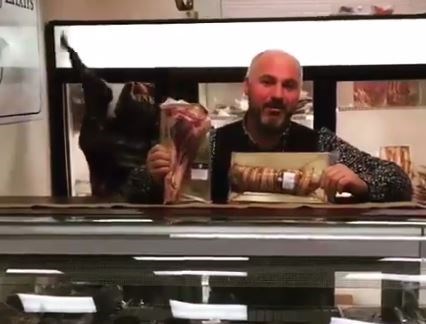 The tube man also goes by the name of Brian Quarmby in his free time. (via Facebook/Birch and Boar Butchery)

The CN Centre’s Harold is not the only wacky inflatable arm waving tube man in town, as local butchery Birch and Boar has debuted its own version in a new video.

If you watch the video closely, you might be able to spot the wacky wavy inflatable tube man in the background as Garrett Fedorkiw, one of Birch and Boar’s owners, chats about some new products.

“We like to have fun with our posts and our social media, so we kind of came up with the idea. We wanted a wacky inflatable arm man and I had the brightest hoodie on so I just jumped back there and got into character,” says another one of the company’s five owners, Brian Quarmby.

“We had some new lamb come in from a local farmer so we were excited about that, and whenever there is a deal, it always seems like it’s a wacky inflatable arm man, so we kind of improvised,” says Quarmby.

“We like to have fun. The five of us are all really good friends and we are kind of characters,” he adds.

For more hilarity, you can find Birch and Boar every Saturday at the Prince George Farmers' Market, or follow them along on Facebook.