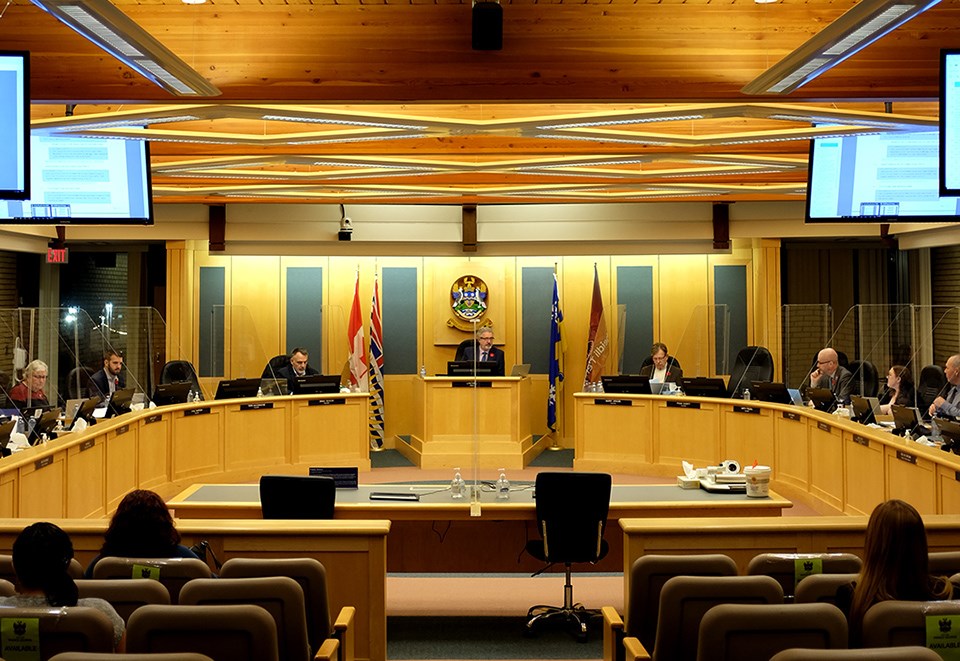 Although budget discussions began Monday afternoon (Jan. 25) with a public input session and then spanning several hours, council discussions will carry over into Wednesday.

Council opted to debate each item in both the budget and capital plan before making a final decision.

“We don’t vote on any individual items until we have time to go through the entire budget as a whole so we can go through piece by piece then we can go back through and vote,” suggested Coun. Kyle Sampson at the beginning of budget discussions.

Council is currently debating a two per cent tax increase with the largest portion coming from a $1.5 million increase to the city’s snow-clearing budget. 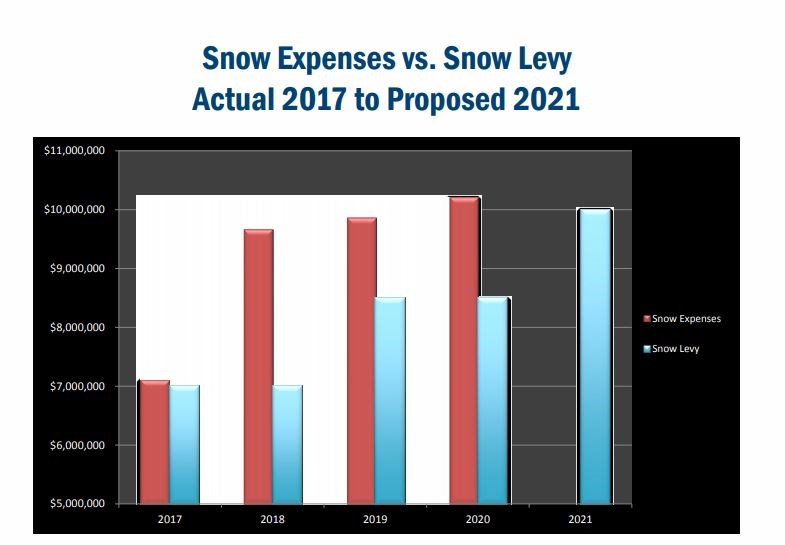 A chart illustrating the proposed increase to snow control. By City of Prince George

“It’s been getting more costly to maintain and in recent years; it’s shown that we are spending about $10 million a year to maintain the snow service level that is established in our bylaw, as a result we are recommending a $10 million snow levy or an increase of $1.5 million,” explained the city’s financial manager Kris Dalio during the meeting.

“That is to maintain that service level that we have as well as set aside some money each year in a snow reserve in case we get a bad snow season and there is some money there to make up from that.”

Other proposed increases include $486,442 for the general levy, $150,000 for road rehabilitation and $125,000 for the General Infrastructure Reinvestment Fund. 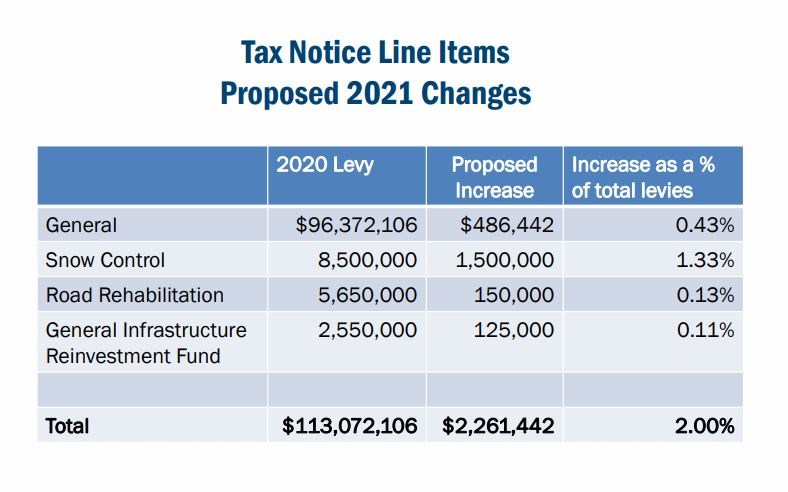 A chart breaking down the proposed two per cent tax increase. By City of Prince George

However, Prince George was also the recipient of $6.11 million from funding for the province’s safe restart grant which could be used to offset or bring this year’s increase down to zero per cent.

In December 2019, the city’s finance and audit committee had recommended using only a portion of the funds to reduce the tax increase to two per cent.

The report before city council show’s administration is recommending using $796,185 to reduce the tax levy and saving the remaining $5.31 million for future uses.

To completely eliminate the tax increase this year would require the city to use $3.6 million of the funding.

“I want to speak to the two per cent tax increase for residential taxes. I would like to object to that tax increase. Households are a little stretched right now,” said a caller during the public input session.

“There’s a lot of financial pressure and a two per cent increase combined with the increased of assessments that is going to be a mortal wound to a lot of families and a lot of household incomes.” 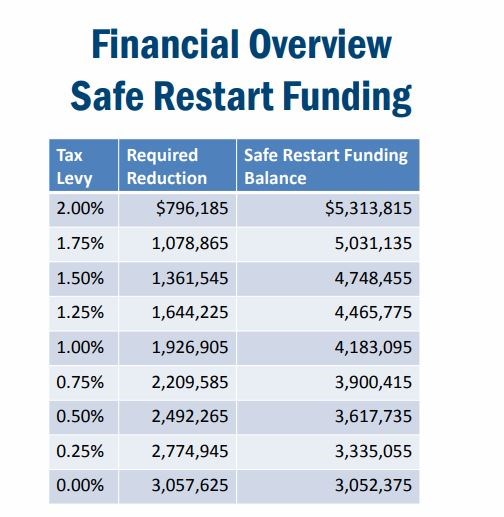 A chart detailing the Safe Restart Grant money options regarding the proposed tax levy. . By City of Prince George

A bulk of the discussion centered around whether council should adopt a zero per cent tax rate bylaw this year due to COVID-19 or stick with the recommended two per cent.

“We have got a fund that can help. The challenge I have is that none of us know where COVID is going to go. We are hopeful that vaccinations will result in success and we are going to keep advocating to get a 2021 safe restart fund as well,” said Coun. Garth Frizzell.

“That doesn’t guarantee more funding so I am nervous about taking the risk to spend that surplus when we don’t know what the results are going to be.”

Coun. Sampson expressed the importance of discussing a zero per cent increase as a baseline.

Coun. Susan Scott also noted that even though the Safe Restart Grant money comes from the provincial and federal governments at the end of the day it’s also tax payer dollars.

“I know it’s contributing to what our municipal choices might be but it’s still the money of the citizens.”

Budget discussions will continue on tomorrow at 3:30 p.m. and be available for livestream on the city’s website.

Once the budget is approved administration will create the tax rate bylaw to be approved before May 15.