Council will also decide if it wants to add an obstacle course to the replacement pool project
Feb 21, 2021 11:57 PM By: Hanna Petersen 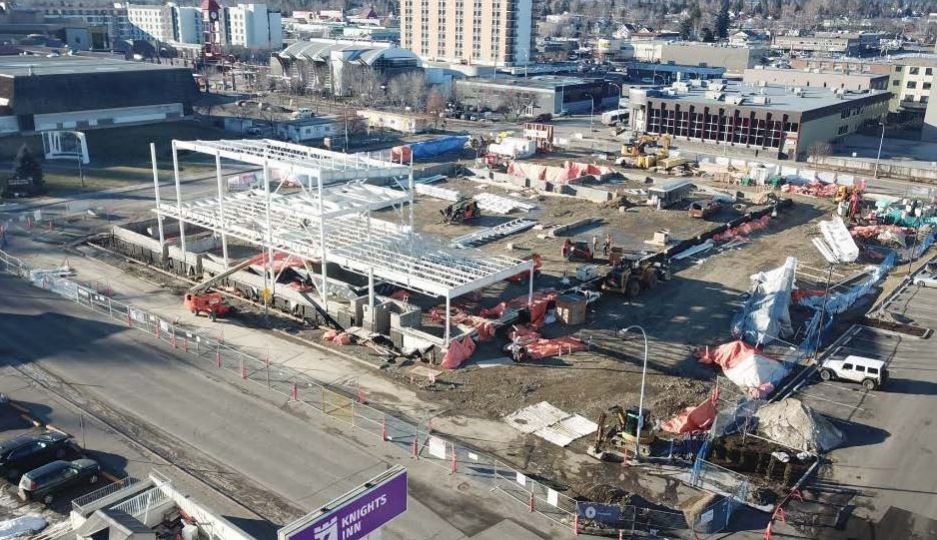 Construction on the downtown pool replacement project.City of Prince George

Prince George city council will have some big decisions to make regarding the future of aquatics in the city at tomorrow night’s meeting (Feb. 22).

A report to city council states the new downtown pool is currently on budget at 25 per cent complete with $9.1 million spent on the project so far. The project has achieved a milestone goal of completing the building foundations by the end of 2020 and the remainder of 2021 will focus on the completion of the building envelope and initiation of interior finishes.

However, council will now have to decide if it wants to add a play amenity called the “Ninja Cross” which is an on demand obstacle course that suspends from the ceiling over top of the lap pool and retracts into the ceiling space when not in use.

The new pool roof structure has been designed to accommodate the load of a potential future addition of the Ninja Cross obstacle course. The supply and installation of a dual lane Ninja Cross obstacle course is estimated at $500,000. However, admin is recommending it to be pursued at this stage of the project because it would be more cost effective to install it in conjunction with the current installation of structural steel.

If council chooses to add this feature the revised project budget will be $36.25 million. Administration is recommending a budget amendment to utilize funding from the Investing in Canada Infrastructure Program grant awarded in support of the pool which is $10 million.

The remaining funds from the grant would be used toward the cost of completing the existing scope of the Downtown Replacement Pool Project.

Council also has the choice to add an on-site snowmelt system to the pool project which would utilize the district energy system to heat the building’s pedestrian routes and main entrance. The addition of the snowmelt system is estimated at $350,000 with annual operating costs of $10,000 to $15,000.

However, administration is not recommending it be added to the project because a review identified concerns with the performance of the system and the potential for future shifts that could cause leaks in the concrete-encased piping.

Given the difficulties of COVID-19 council will also have to decide what to do about the Four Seasons Leisure Pool, the facility the new pool is set to replace.

The two options council has to consider are to permanently shut down the Four Seasons and plan for demolition or maintain the current status of the Four Seasons for future limited reopening consideration, following the partial resumption of leisure activities.

The demand for pool use remains high with 35 weekly swim blocks available for registration at the Aquatic Centre and all of the swim blocks are fully booked between two and six weeks in advance. 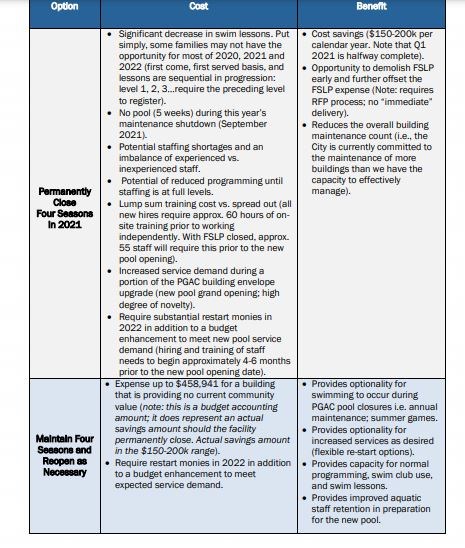 A chart regarding the possible permanent closure of the Four Seasons Pool. . By City of Prince George

The Four Seasons main function was to provide swimming lessons for residents, which has not occurred since last March when the pool was closed. The city says limited swimming lessons are planned to resume in May at the Aquatic Centre, ensuring all safety related Covid-19 protocols and best practices within the aquatic industry occur but this does mean the cancellation of an ‘everyone welcome’ swim block on Sunday mornings.

Another factor council will have to consider is the Aquatic Centre faces a number of lengthy planned closures which, if the Four Seasons is permanently closed, will leave the city without a public pool for weeks at a time.

The Aquatic Centre has an annual five-week shut down for operational repair and the Aquatic Centre will host competitive swimming for the 2022 BC Summer Games in July just one month before the new downtown pool is scheduled to open.

Should Four Seasons close, residents will not be able to swim over the dates of the games or at a minimum have significant restrictions on swimming during the Summer Games.

There’s also the risk that by closing the Four Seasons, it may be difficult to find enough experienced lifeguards to staff the new downtown pool as it takes an average of one year for applicants to be qualified for an entry-level position at the pool.

If this is the case the city says the new pool may have to provide reduced programs for approximately the first six months of operation.

The city says keeping the Four Seasons Leisure Pool Building idle and not in use still carries costs, and is recommending if the city decides to permanently close the facility, to demolish it right away.

The city says roof repair last year on the building costs approximately $30,000 just to prevent falling shingles and roof debris. An idle facility still incurs some of these costs to ensure the safety of passersbys including maintenance costs like boarding up broken windows and maintaining security.

Council will tackle these issues beginning at 6 p.m. tomorrow night. You can view the full agenda online and livestream the meeting through the city’s website at 6 p.m.